Pac-12 Power Rankings: The season is just around the corner

The college football season is revving up across the nation and with that, the Pac-12 squads will get their chances to show what they can do.

Two Pac-12 teams already completed their first game, one with an excellent start, and the other, not so much.

Here are our initial rankings: 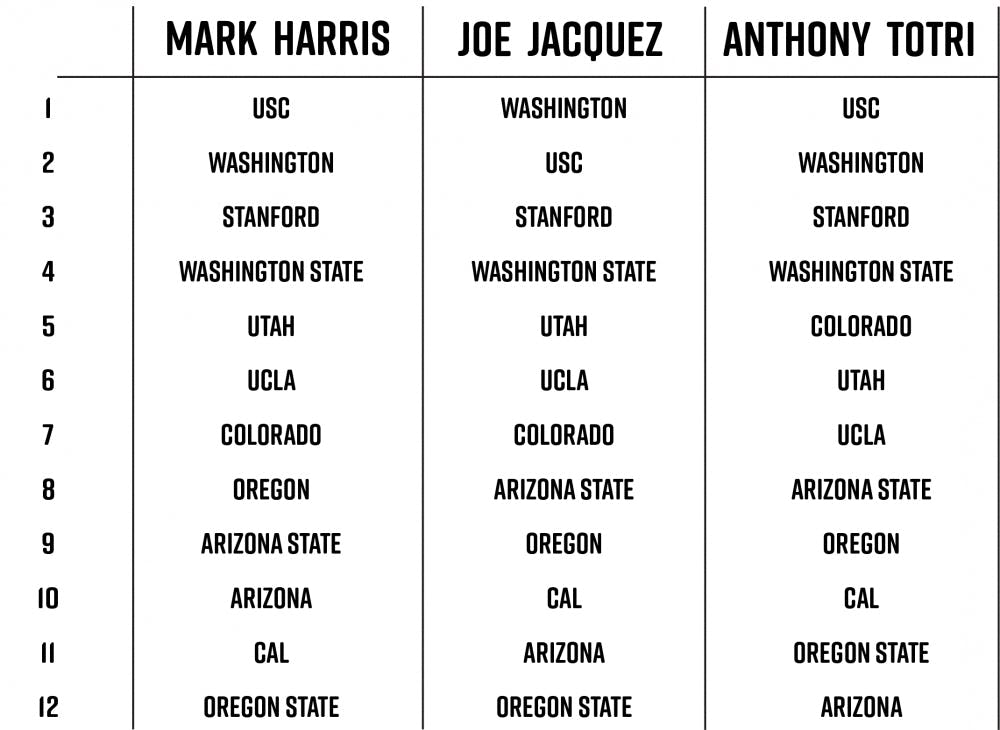 The Trojans look like the best of the Pac-12 and are a trendy pick to win the national championship. Quarterback Sam Darnold burst on to the scene last season, is now a viable Heisman candidate and has what it takes to lead USC to success. Trojans have the roster to compete with anyone considering running back Ronald Jones and defenders Cameron Smith, Porter Gustin and Iman Marshall.

The reigning Pac-12 champions will be a good team once again. The Huskies have multiple contributors returning on offense, including quarterback Jake Browning, running back Myles Gaskin and receiver Dante Pettis. Also returning is the duo of defensive linemen Vita Vea and Greg Gaines, along with linebacker Azeem Victor on defense. UW also benefits from an easy out-of-conference schedule and does not have to play USC in the regular season.

Well, there's no better way to start the year than waxing a team by a score of 62-7. That is exactly what the Cardinal did on Saturday against the lowly Rice Owls in Australia. While they were not the best opponents, Stanford looked impressive with quarterback Keller Chryst and running back Bryce Love both playing effectively. Freshman tight end Colby Parkinson was also off to a good start with two touchdowns.

Since head coach Mike Leach has arrived in Pullman, the Cougars have ascended from the cellar of the Pac-12. Expect no less in 2017, with quarterback Luke Falk and most of his experienced offensive line returning for another season. And with Hercules Mata'afa anchoring the defense, the Cougars might actually keep some points off the opposing scoreboard for a change.

Never count out Utah. Every year it seems the Utes win at least eight games and are always one of the most physical teams in the league. Safety Chase Hansen and defensive lineman Lowell Lotulelei will keep the defense on track, but the real question will be if newly-named starting quarterback Tyler Huntley can win games for the Utes.

The Bruins struggled to a 4-8 record in 2017, but a full year with quarterback Josh Rosen (a possible top pick in the 2018 draft) could help UCLA bounce back into relevance.

The Buffaloes have some losses that could hinder them this season. Colorado loses quarterback Sefo Liufau, defensive coordinator Jim Leavitt (who led them to a top 20 defense), and eight defensive starters from last year. But the Buffs will still be competitive, as most of their wide receivers return, in addition to quarterback Steven Montez, who played well with limited action last season.

New head coach Willie Taggart has his work cut out for him with the Ducks. Oregon's defense was dreadful last season and their offense was far less impressive compared to years past. On the bright side, freshman quarterback Justin Herbert showed some promise at the end of last year.

The Sun Devils have many options on the offensive side, with the talented duo of Demario Richard and Kalen Ballage in the backfield and stud receiver N'Keal Harry on the outside. Quarterback Manny Wilkins will have some weapons, but there is uncertainty on the defense, as ASU will have two newcomers at the starting cornerback spots.

Well, the Wildcats still haven't picked between Brandon Dawkins and Khalil Tate as their starting quarterback, which probably is not the best sign for long-term success. Simply put, Arizona was awful on defense last year, and unless that improves, the team will not make it too far up the rankings.

Much like Arizona (and ASU, and Oregon, and Oregon State), Cal wasn't very proficient on the defensive side of the ball in 2016. Now, quarterback Davis Webb is off to the NFL, and former head coach Sonny Dykes got the axe during the offseason. Good luck.

The Beavers were not originally the last team in my rankings, but over the weekend they lost 58-27 to Colorado State. Maybe it is a bit unfair, but losing by over 30 points will earn the team a spot at the bottom of the list.