Someone begins talking to you. You turn your head to look at the wall to better listen because you find eye contact distracting. A few sentences in, you notice the speaker gets annoyed that you are not paying attention. You're just different from other people.

This is just one of the many ways autism can manifest itself, especially in social situations.

Technological entrepreneurship and management senior Hans Keller said he understands this, and it's part of his reason for founding the club ASD@ASU, which aims to clear up misconceptions about autism and unite students on the autistic spectrum.

There are rarely any formal club meetings outside of organized symposiums where experts and club members speak, Keller said. Members of the club rarely talk to each other, but they know that everyone’s there for each other, he said.

Keller said Garret Westlake, director of the Polytechnic campus Disability Resource Center, reached out to him because he wanted a student who could not only raise awareness of autism but also speak to living life with autism on the spectrum.

Keller said when Westlake approached him he was a freshman, poorly adjusting to life away from home and ultimately finishing his first semester with only six of his original 15 credits. Once Keller could better navigate college life, Westlake helped him found the club.

Keller said autism is a communication barrier. People with autism have difficulty communicating with strangers, because they have to train themselves how to read individuals, he said.

“It’s something you can only get better at by doing,” Keller said.

Autism is a condition that is different for everyone, Keller said.

Keller said his autistic symptoms focus more around environmental aspects. The smell of a room or too much light can give him migraines, he said.

“I don’t really have a problem speaking, which is kind of an anomaly on the spectrum,” Keller said.

Keller said he’s overcome social barriers to where he has to remember not to make too much eye contact rather than too little.

Tricia Bawn, a service professional at Polytechnic’s Disability Resource Center, said she has worked with all levels of autism, from nonverbal to academically gifted.

Bawn said although autism is an individualized condition, a dislike of face-to-face communication and group participation is common.

She teaches a one-credit class for students who are self-identified as autistic with Westlake. She said the class focuses mainly on what skills the students feel they need to cover, such as taping mock interviews for students to see what social cues they are missing.

Bawn also recommended private rooms for freshman with autism to acclimate themselves to college before tackling life with a roommate.

Maria Dixon, clinical associate professor at ASU’s Department of Speech and Hearing Science said that as autism is a spectrum, associated speech impediments fall onto a spectrum as well.

College students with autism tend to have good language skills, Dixon said. Often, they score high in vocabulary, syntax and grammar, she said.

Problems enter with higher level skills such as making inferences, Dixon said. She gave examples such as taking what is said literally, misreading nonverbal cues and failing to pick up on sarcasm.

“A lot of times that’s a goal of speech therapy: teaching someone to be sarcastic,” Dixon said.

Dixon said she holds speech therapy in groups to allow for more natural interaction and to form an impromptu support group.

Dixon said there is a media focus on young children with autism, overlooking the fact those children grow up and continue to live with autism. 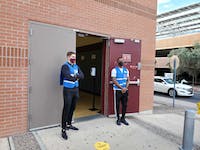 The University has spent over $12 million supporting ...

ASU to open a COVID-19 vaccination site at the SDFC

ASU will be opening a COVID-19 vaccine site at the ...
Previous Next
×