Ashley Moore is a product of incest.

At the age of 23, Moore has experienced a litany of horrific events occur before her very eyes. Even before she was born, her father sexually abused his daughter, resulting in Moore’s birth. Soon, she entered the foster care system where she lost trust in the adults who surrounded her. As an adult, Moore fell into sexual exploitation, an umbrella term that includes human trafficking, prostitution and rape.

Moore was a bold and opinionated child who lacked structure and stability.

“I was broken,” she says. “At the age of four, I was not willing to let anyone close to my heart.”

Eventually adopted, Moore was quickly ostracized by the same family who took her in.

“I was told it would be best if I were not a part of their family any longer,” she remembers. “I was hard to be around.”

Through a series of difficult events, Moore ended up in a relationship with a man who drugged her with methamphetamine and isolated her from people she knew.

“I was dragged out to the desert and beaten with a two by four,” Moore recalls. “He was going to leave me there to die.” When it turned out his car would not start, Moore was the one to walk to a nearby dairy to contact police. In another unfortunate turn, drugs were found on her person. Moore was arrested and later released, while the man walked away free.

Her abuser then locked her up in a hotel room in a seedy section of Phoenix. Little did Moore know, this would introduce her to the Phoenix Dream Center, which she says saved her life.

“I honestly think he was an angel, or a cop,” Moore says of the man who eventually came to her rescue. “He complained that he could hear my boyfriend throwing me around and he couldn’t stand it anymore.”

This sliver of chance gave Moore the drive to save herself.

“My abuser left the room for about 30 minutes,” she says. “I don’t know what came over me, but I made a break for it and I ran.”

The Phoenix Dream Center, a volunteer-driven non-profit organization, offers outreach programs such as Sophia’s House for young pregnant women, Where Hope Lives which serves as a haven for young women removed from sex trafficking, and Church on the Street, a faith-based recovery program for former inmates.

Rescue services, rehabilitation programs, affordable housing, and food distribution are also a part of The Phoenix Dream Center, according to Moore.

After graduating from the program, Moore became a member of the staff. She says girls arrive to the program as young as 14 years old. “Some stay a night, some stay a week,” she adds. “Almost always, they come back.” She says that some people are not ready or are not used to living with structure.

According to Moore, statistics show that 80 percent of women involved in human trafficking are products of the foster care system. “When you’re not used to having love and stability, your life is chaos,” she says. “The Phoenix Dream Center makes sure these women feel loved, which is so foreign to them.”

Hannah, who wished to withhold her last name, shares very similar experiences with Moore. She has received support from Where Hope Lives and The Phoenix Dream Center.

Kidnapped at the age of 23, Hannah was drugged and taken out of state. “There was a period of 24 hours that I was mentally coherent,” she says. “I woke up in a warehouse with a group of other girls.”

Now 25 years old, Hannah says she had been in and out of The Phoenix Dream Center many times before returning permanently.

Various branches of The Phoenix Dream Center focus on different aspects of recovery and assistance.

Church on the Street, another program under The Phoenix Dream Center’s umbrella, provides a bible boot camp, Moore says. The program has grown to the point that it will be housed in its own building.

“We have so many people coming in, we just need more room,” she adds. Church on the Street preaches faith-based curriculum. Despite its Christian roots, Moore believes religion should not be pushed on any one.

“It’s a voluntary program that teaches men and women how to form a relationship with God,” she says. “It’s up to the individual.”

Moore adds that Where Hope Lives assists girls who wish to receive their GED, offers them access to doctors and even legal help.

Young women receive a mentor upon entrance of Where Hope Lives, according to Moore.

“Mentors will guide the girls through different areas of life,” she says, adding that there are several pillars unique to Where Hope Lives that give women structured stability.

The four pillars include New Life, Heal, Perseverance and Conquer and lead women down a path to recovery.

“If a woman strays from her path, there are repercussions,” Moore says. “That is a separate category, Redirection.” Each pillar requires certain criteria to be met before moving to the next.

“Women are allowed more freedoms, the farther they go,” Moore says. “If they show they are capable and responsible, they are given more freedom.” The third pillar for example, requires women to build a resume for future employment opportunities. The fourth pillar allows the women to keep a cell phone.

A common possession for most, cell phones provide a kind of accessibility that the women residing at The Phoenix Dream Center are not always exposed to, which can be dangerous, according to Moore.

“Communication with those who are not in the program can be difficult,” she says. “And you can find anything on the internet.”

Upon completion of each pillar, and graduation from The Phoenix Dream Center’s program, men and women are able to stay for one year in the facility, according to Moore. “80 percent of those who leave the program fail,” she says. “We are trying to change that.”

Funding for the Phoenix Dream Center is provided by donations, according to Huggins.

The Phoenix Dream Center provides tools, resources and shelter to those who wish to provide a better life for themselves, like Hannah and Moore.

“The love and support those who enter the program receive is amazing,” Moore says. “It’s amazing to watch men and women grow into the people they want to become.” 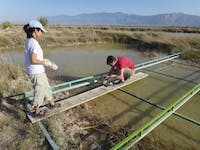