ASU vs. Oregon: An epic battle for the Pac-12 Disappointment Bowl

It was a sloppy, back-and-forth fight between two teams who won't reach the lofty goals they had entering the season.

Well over 200 years ago, a British fur trader named John Meares landed on what is now the southwest coast of Washington state — a mere 200 miles northwest of Autzen Stadium in Eugene, Oregon. It was blanketed with fog and a steady drizzle and has become known for such today. As the first European settler of the land, it was up to Meares to give it a proper name.

Appropriately, he landed on Cape Disappointment.

With a similar steady drizzle — though no fog — pregame, it was as if the Oregon Ducks brought with them the weather, the attitude and, well, the disappointment that lies just north of their campus. Not only was it a sign of things to come for ASU, but it was indicative of the matchup as a whole.

“Disappoint” and all its conjugations can be a complicated word, especially for sports teams. Fans will have no problem using the word — and, quite frankly much worse — to express their feelings.

But players and coaches have to toe the line between being honest and taking issues that should be settled in the locker room into the public eye.

And yet, on multiple occasions throughout the season, it’s been just the word that coach Todd Graham and athletic director Ray Anderson have used to describe plays, games and the season as a whole. 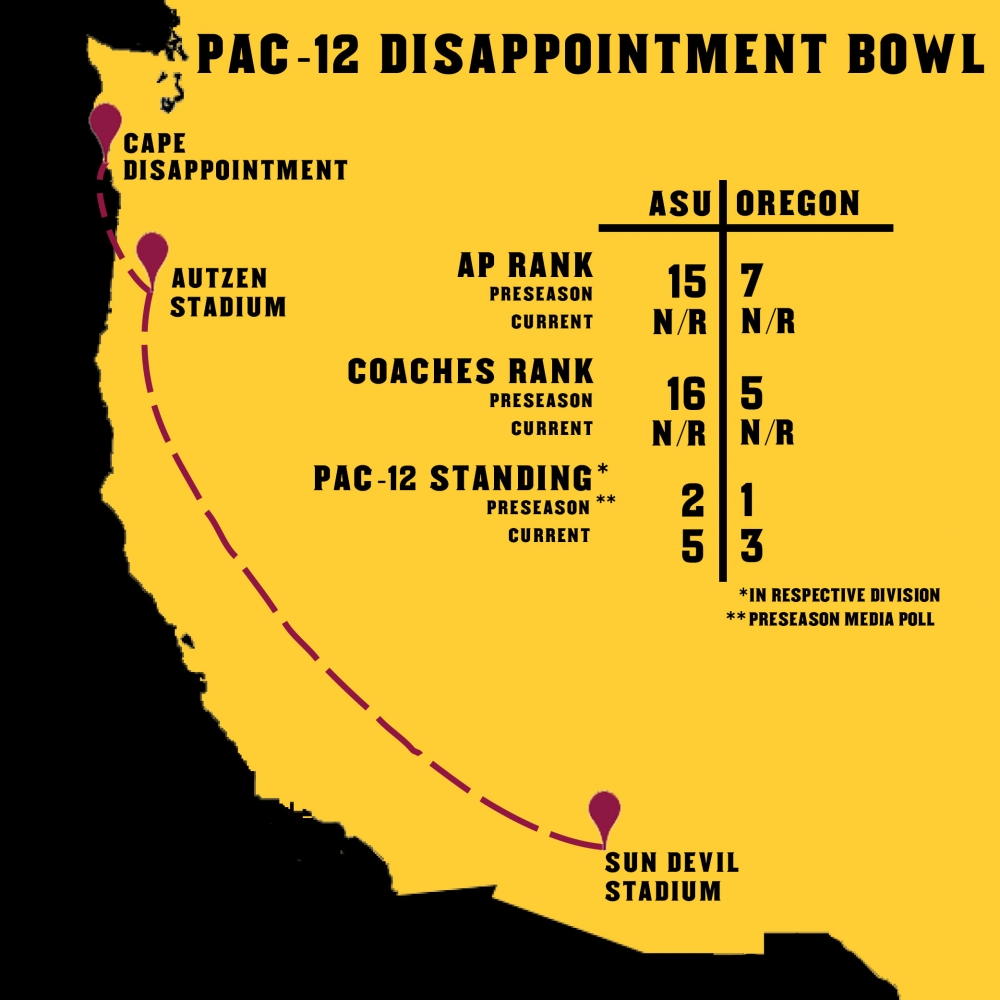 “Disappointed” was the last word a seemingly deflated Graham uttered at his postgame news conference after Thursday’s triple overtime 61-55 loss to Oregon.

But ASU hasn’t been the sole victim of faltering amidst high expectations. While the Sun Devils had national pundits picking them as dark horses for the College Football Playoff, the Ducks were hardly a bold pick.

Both ASU and Oregon were — and arguably are — supremely talented on paper. Where the Ducks had Marcus Mariota, the Sun Devils had Taylor Kelly. Each started under center the past three season but have now graduated.

It was their replacements, senior Vernon Adams and redshirt senior Mike Bercovici, who would prove pivotal in the outcome of Thursday’s shootout. Down the stretch, Adams proved nearly impossible to wrap up, while leading the Ducks on an improbable comeback to force overtime. Bercovici, meanwhile, threw the interception that led to the Ducks regulation comeback and also the one that sealed the game in the third overtime period.

“It’s on me at the end of the game putting the ball in jeopardy like that,” Bercovici said some 20 minutes after the game’s ultimate play. ...

“Our attitude doesn’t change. … We have four more games to go out and dominate, and prove to the country that we are the type of team that we started out the season as.”

However, that’s an impossible task. Now eight games into the season — 75 percent of the way through — the Sun Devils sit at 4-4. The best case scenario leaves ASU with eight wins, the number Graham’s teams have equaled or eclipsed every season he’s been in Tempe.

Even if Bercovici wants to play national championship caliber football for the final four weeks of the season, it is unlikely to erase the sour notes left by a sloppy, heart-breaking loss to Oregon, a 28-point walloping from USC and early season struggles against the likes of Cal Poly and New Mexico.

But while both Adams and Bercovici have had their highs and lows, it was the transfer from Eastern Washington University whose highs came at the right time on Thursday.

“That was a heck of a football game,” Graham said, exhausted. “But at the end of the day, we made too many mistakes to win.”

And it was Meares, too, who made a mistake. The colonial sailor came barely a mile short of reaching the mouth of the then-undiscovered Columbia River. That mile or so still was closer than ASU or Oregon will come this season to reaching the College Football Playoff.