Given the introduction of the College Football Playoff last season, bowl games have become less important than ever before. When the playoff eventually expands to either six or eight teams, the bowls will be devalued even more.

However, the math doesn't quite work out for that many teams to become bowl eligible, which requires a 6-6 record. Between two and five teams with losing records will play in a bowl game this year.

Look at photos from the last bowl game ASU football played in here: 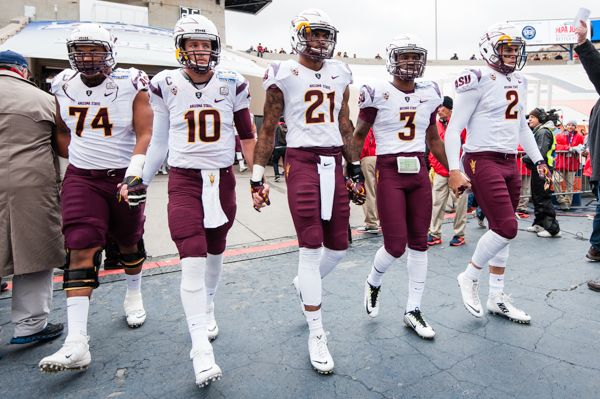 While I generally like bowl games from a spectator perspective – it provides a unique out-of-conference matchup, a new place to travel — we've reached oversaturation of bowl games. Without the introduction of the new bowl games, we're most likely not scraping the pool of losing teams.

The NCAA has decided that the losing schools going to bowls will be selected based upon APR score. Missouri, who is among the leaders of 5-7 schools in APR, announced that it will decline a bowl invitation because it wants to shift its focus to finding a new coach.

Missouri and other 5-7 schools that decline bowl invites will have made the right move. I get that bowls allow extra practice time, but you didn't earn it. Going to a bowl at 5-7 is even worse than getting a participation trophy because it's disguised as an accomplishment. Additionally, a 5-7 bowl team will probably cost its school or conference money because fans are less likely to purchase tickets if the team isn't any good.

Want proof of how meaningless bowl games are? Just look at the coaching carousel. Coaches are fired after the regular season, not following bowl games. To jump-start recruiting at a new school (National Signing Day is Feb. 3), coaches will sometimes leave before the bowl game to get started at their next school.

Brian Kelly, who led an undefeated Cincinnati squad to the Sugar Bowl, declined to coach in perhaps the Bearcats' biggest game in program history, instead leaving for Notre Dame.

This year, the carousel started early with midseason firings and retirements, but for major schools that are going bowling, only Georgia and Miami still have openings.

Matches involving Group of Five schools are generally less attractive than ones with Power Five schools because of the value of brands.

The watchable mid-tier teams often have their coaches plucked after the regular season, so you have to wonder about players' motivation for a bowl game. Toledo and Memphis, two of the top Group of Five schools in 2015, have interim coaches after their head coaches left for Iowa State and Virginia Tech, respectively, the day after the regular season ended.

The two new bowl games, with tie-ins for mediocre teams in mid-tier conferences, aren't adding value to fans. We've reached the point of too many bowl games in college football, and the only way to stop expansion would be to decline the opportunity.