ASU opened its newest building, the Beus Center for Law and Society, on August 15, marking a new era in the University's legal education.

ASU administrators envisioned a building which would not only provide education to the students of the Sandra Day O’Connor College of Law, but a place that would serve as a heart for the Downtown Phoenix campus. They hoped that the new building would encourage Phoenix residents to engage with and learn about law as well.

“[ASU President Michael Crow] felt like the law schools, historically, had done a very poor job of being involved with the communities and society,” said Tom Williams, assistant dean for academic affairs and the institution at the Sandra Day O’Connor College of Law.

When designing the Beus Center the need for a connection with the community was one of the main factors ASU asked the project’s designers to take into consideration.

Not only does the building connect law students with resources such as the ASU Alumni Law Group, a practice that often hires law graduates, the school also plans to allow community engagement through lectures that will be open to the public.

“Education is supposed to go both ways,” Williams said, explaining that the Beus Center provides numerous resources to law students as well as helping to educate the community.

The building also features technology, such as large interactive touch screens and educational videos, to help accomplish this mission, he said.

The center is home to the Arizona Legal Center, a triage that provides information about pro bono or paid lawyers to the public.

The $129 million project was paid for through a number of donations, many from the Phoenix legal community, and the Arizona Board of Regents.

Williams said the city of Phoenix was a strong proponent of the plan, and also provided financial backing for the program.

New York-based Ennead Architects and local Jones Studios, among others, collaborated on the building's design, hoping to actualize administrators' hopes of engagement while incorporating key elements of sustainability.

Brian Masuda, Project Designer at Ennead Architects said ASU wanted to move the law school from the Tempe campus to the Downtown Phoenix campus so that law students could engage with other Downtown Phoenix programs, such as nursing, journalism and social work, while also placing students in a geographically advantageous proximity to the legal community in Phoenix.

“The idea that the building would be open and be in a downtown setting really meant that they would get more exposure and have the opportunity to show people how law affects their lives on a daily basis,” Masuda said. 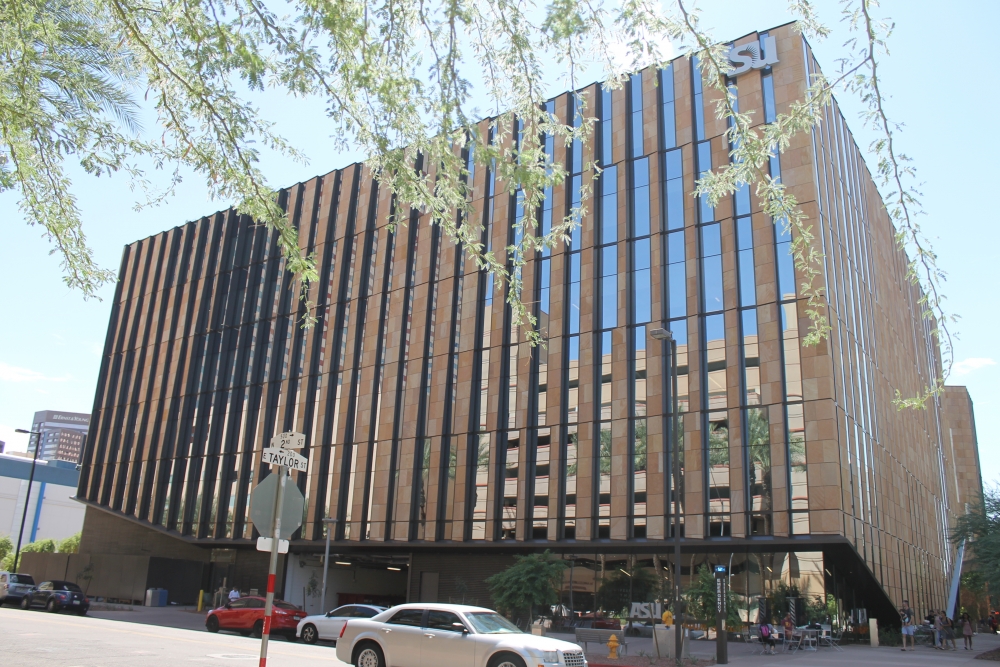 “We think that by basically cracking open the building we’re allowing people to flow through, and also exposing some of the core program elements that are housed within,” Masuda said.

The architects also incorporated a number of social spaces such as the W.P. Carey Foundation Great Hall, library and fifth floor courtyard, which are all accessible to the public.

Masuda explained that the library is one of the highlights of the building, as it has one of the most open floor plans of the law libraries the team has designed, and is meant to encourage informal learning between classes.

“There was a demand to make a high performance building. So, not only did it have to function on a social and a school level, it needed to be a building that was designed around sustainable principles,” Masuda said.

This same courtyard was one of the elements that increased the building’s sustainability, Masuda said, explaining that the two center-facing sides of the building block each other from sunlight, thus saving energy.

The exterior facade has been modulated with vertical sun fins which protrude out of the building in relation to the size of the window or other opening, he said.

Tomas Rossant, Design Partner at Ennead Architects, said the designers wanted to create a heart for the Downtown Phoenix campus, comparable to the traditional European piazza.

“The notion of the piazza and the heart are so important to the functioning of the city as a social context,” Rossant said. “Finally there is a social heart of downtown.”

The placement of the law school, while not only providing students easy access to the Phoenix court systems, also serves as a resource for ASU students studying in closely related programs at the Downtown campus, Rossant said.

“Nursing culture needs to understand medical liability. The press needs to understand legal constraints. There’s a kind of beautiful symmetry to the fact that at the very center of the campus [...] is also the institution that in effect, is the glue that connects every endeavor of American professional culture,” he said.

The Beus Center’s design is extremely progressive compared to that of other law schools, Rossant said, explaining that they hope to dematerialize the barriers between the institution and the public.

“Universities are in crisis, and President Crow is leading a revolution,” Rossant said.