Sun Devil Stadium has been an ASU icon since its original construction in 1958.

Now, 58 years later, the stadium has opened its doors to students and fans for yet another season of college football, revealing new renovations such as upgraded seating and additional bathrooms and concession stands.

The upgrades were meant to increase the quality of fans’ experiences, said Maggie Emmons, Corporate Communications for Sun Devil Athletics.

“It’s one of the largest projects in Arizona State history, and it’s going to bring a much better game day experience to all of our fans,” Emmons said.

The stadium concourse ceiling was raised to about 20 feet to increase airflow in the stadium and make it more comfortable on hot days.

Wi-Fi is now available in half of the stadium, and will reach its entirety after the project is completed in 2017, Emmons said.

In addition, the bleacher benches in the lower bowl will be replaced with individual seats with chair backs, arm rests, cup holders and on average, about four extra inches of legroom.

The $268 million renovation project began in 2014 and was broken up into three phases.

The first phase of construction equipped the stadium with a new student section and other upgrades, such as dedicated student entrances and a band seating area with access to the field at the south end zone.

It also removed some existing structures, including parts of the loge, some steel bleachers and concessions stands, to create a more seamless and pedestrian-friendly lower bowl.

Although the second phase of these upgrades is now complete, the final phase of construction will resume immediately after football season ends this year.

The project is funded by private donations from fans and the sale of university bonds to outside parties, according to Emmons.

Compared to last year, ticket prices on the west side of the stadium have increased by an average of 2.4 percent.

Emmons said ticket prices often increase due to inflation and cost of living, and this year’s increase is not substantial compared to other years.

Yet, for premium seating in the stadium’s west side, ticket prices have risen an average of 5.9 percent.

“When you look back at college, there are memories that you have that just stick with you,” Emmons said. “I know for me, attending football games with my friends, and then eventually working them as part of the athletic department, was such a huge time in my life.”

People connect to their alma mater through sporting events. They bring people together, she said.

“As visible and as passionate as our fans are about football, it allows us to also sponsor 25 other sports and give almost 600 student athletes the ability to come here and go to school,” Emmons said. “We’re lucky that we have a football team that is great and understands that they provide opportunities for all of our student athletes.”

To Anna Wales, communications specialist for the Ira A. Fulton Schools of Engineering, the stadium needed these renovations.

“This was necessary. It was starting to deteriorate with age,” she said. "Giving it a little bit of a face lift doesn't take away our history or the pride that you feel when you enter the stadium."

Wales and her family have been ASU football season ticket holders for over 15 years, she said.

“We eat, drink and sleep Sun Devils,” she said. “We don’t even use the name of that school down south.”

Wales’s daughter and son-in-law met while performing in the Sun Devil Marching Band.

Wales’s son attends the ASU Preparatory Academy, her husband is an alumnus, and she is in the process of pursuing a degree in communications at ASU, she said.

They’re a Sun Devil family. Wales said red or blue toothbrushes are not permitted in the house.

“I’ve learned a lot from watching our students and their spirit. I love our students,” Wales said. “That’s the best, when our Inferno gets going and they’re loud.”

Wales said her season ticket prices have risen over her years as a passholder.

She said her family had to switch their season tickets to another section because the cost of sitting in the loge, as they had done previously, had almost tripled.

Even with the downgrade, Wales said her family paid about one thousand dollars for each seat.

Yet, she does not mind. 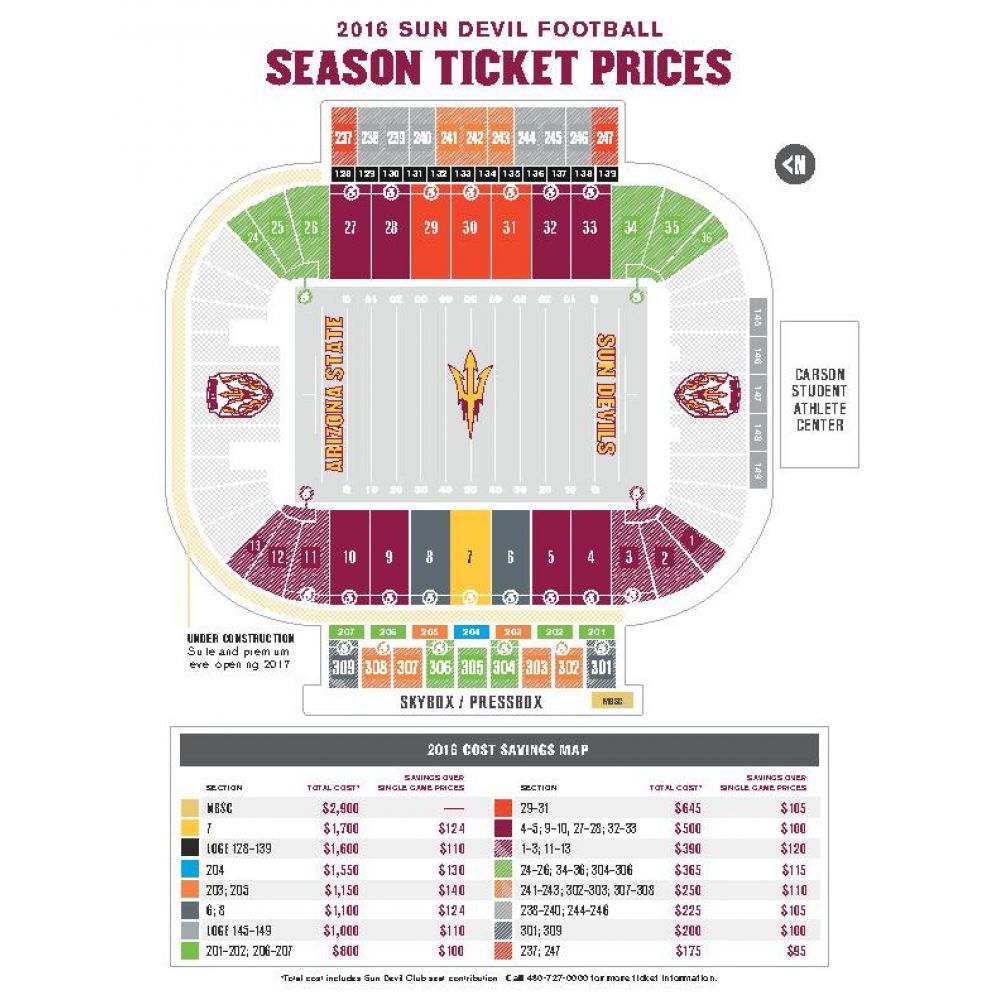 “So when I buy my season tickets, I’m not just buying a seat, I’m actually investing in our student athletes and that makes me really proud,” she said.

Since a student vote in 2014, students do not pay for individual tickets into ASU sporting events. Instead, each person is charged a $75 Student Athletics Fee as a part of his tuition.

Health sciences freshman Gurjeet Manhas said she does not agree with the way the Student Athletics Fee is set up, because she does not attend sporting events regularly.

Still, she said she sees the value of having sports like football on campus.

“(Football) is important because it gives us time to do outdoor activities and gives us time off from focusing only on studies,” she said.

Manhas said she understood why ticket prices would increase marginally, and ultimately, they will benefit the fans.

“The renovations are for our comfort,” she said.

The ASU football team will face Northern Arizona University in the first game of the season Sept. 3.