The redshirt senior carries more than the burden of leadership onto the field for the Sun Devils.

Before she made it to Tempe, the redshirt senior had a childhood filled with sacrifice, hunger, injury and doubt. Despite all the adversity and anguish that life has dealt her, Lara is forever grateful because it shaped her as both a person and a soccer player.

“I thank God for doing everything he did," Lara said. "Putting me in that family, putting me in situations I didn’t like but overcame, and bringing me to a place to call home.”

Sulphur Springs, Texas is where Lara’s family spent the first 17 years of her life. When Lara was three she was introduced to the game of soccer, which later proved to hold much more meaning than just a sport.

Neither of Lara's parents completed their early educations. Eventually they immigrated to the United States from Mexico, bringing with them a deep passion for their culture.

The Lara family was sometimes unable to make ends meet. Both of her parents worked at a dairy farm.

“Only eating beans and rice and occasionally having meat to eat was hard,” Lara said. “My parents got paid very well, but it wasn’t enough for three kids to feed.”

Lara found soccer to be a coping mechanism as violence echoed throughout the walls of her small family home. Whenever she was faced with tribulation, she could be found outside, kicking a soccer ball with her brother and sister.

“People saw us as this happy family in soccer, and then at the house it was different, it was violence and it was really rough,” Lara said with tears in her eyes. “You almost had to have two different personalities.”

While Lara played on many soccer teams in her hometown, none truly tested her skills and capabilities. It wasn’t until a trip to Dallas, two hours away, that she would finally enter the realm of competitive club soccer.

“The club team sponsored me and paid for everything," she said. “Luckily — thanks to God — my brother, sister and I got to play club soccer for free.”

It was in Dallas that Lara would be tested and feel her first leveling blow of defeat. After a tryout, Lara was told she was too small and was cut from the club team.

But Paul Hason, Lara’s club soccer coach on the “D’Feeters," saw her potential. After a year of playing with Hason, Lara would be benched, criticized and given a bigger work load than all her other teammates, unaware of the reasons why.

“My team would practice Tuesday and Thursday with games on Saturday and Sunday,” Lara said. “(Hason) would make me go Monday, Wednesday, Friday to go train with him privately, and I thought that this guy was crazy.”

One evening, Hason made the two-hour drive to Lara’s home to express his belief in the young player.

“He told me, ‘Look I’m going to be hard on you because I love you, and I see your potential, and I want to make you the greatest soccer player ever that you can be,'” Lara said.

Lara believes it's this tough love from Hason that helped form her into the player she is today.

“He made me into this soccer player,” she said. “This good shot, the curve, the way I look at the game, he helped me tune it up.”

Thanks in large part to her training with Hason, Lara gained a coveted spot on the Mexico U-17 women's national football team in her junior year of high school. However, one month before the games, Lara was in a regional tournament with her club team when she heard a pop from her knee, but she continued playing.

She came back in the second half sporting a knee brace, her mind racing with only one thought: She had to play in order to be seen by colleges.

As the play continued, Lara raced for a pass from a teammate and, as she turned to follow the ball, her knee caved in. She lay motionless on the ground. Her head facing her team’s bench. Lara’s coach looked down at her and shook his head.

A month before going to the World Cup for the U-17 team, Lara had torn her left ACL.

“It hit home because for a second I thought, 'This was it, no going to college, no giving back to my family,'” she said.

This wouldn’t be it for Lara. With the help from a team of doctors and physical therapists, she was back on the field in five months. She attributes her left knee injury to the reason she would soon play soccer at ASU, and called it "destiny." 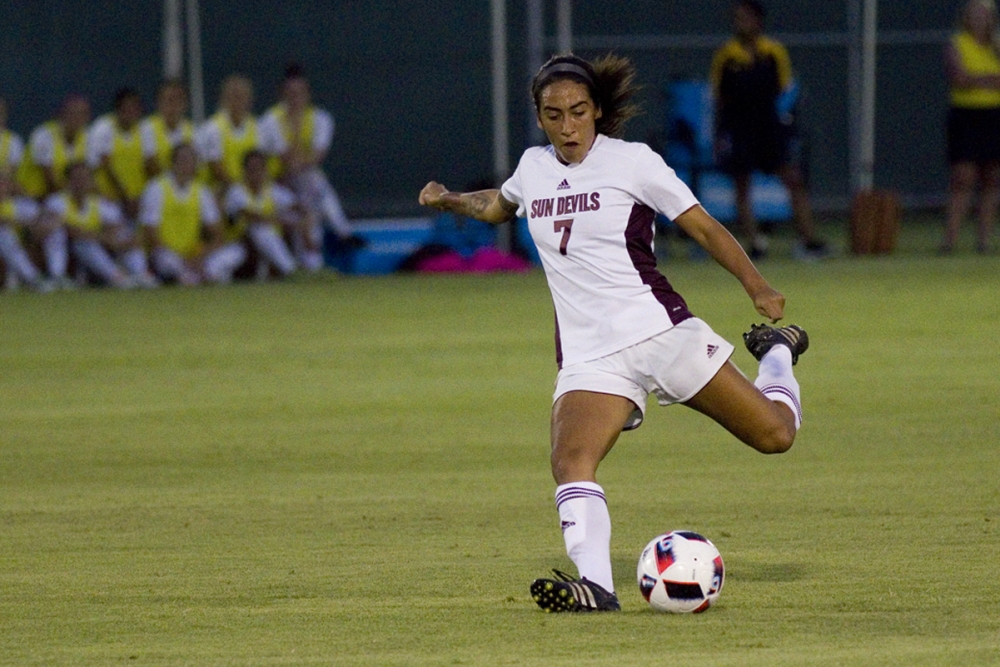 ASU head coach Kevin Boyd would not back away from Lara, like so many other coaches did after her injury.

“I have been around long enough to know ACL’s are not career-enders and athletes tend to come back not only strong, but I think they come back stronger,” Boyd said. “She’s a terrific player, and we thought she would help our program.”

However, one month before coming to ASU, Lara would face another grueling ACL tear, this time to her right knee.

“After my second one I thought, ‘Wow this keeps happening to me,’” Lara said. “I asked God "why?' I am going to school and going to go to the World Cup, which is my dream — and I didn’t understand why it had happened to me.”

Lara described her first year at ASU as her mental breaking point. She would attend physical therapy during the time ASU practiced, never getting to experience the team environment until game days, where she would be mistaken for a recruit visiting the team. She was a total stranger.

“I hated my freshman year,” Lara said. “I didn’t talk to anybody, gained a couple pounds, was a loner and just super depressed.”

It wasn’t until her sophomore year that Lara decided that her injuries were a result of her lack of humility.

“I thought I was better than everybody because I was going to the World Cup,” she said. “This was a way of God telling me to be humble, and I am glad it happened to me on both occasions because it literally changed my destiny and my perspective of life.”

Lara never fully transitioned into the pace of Division I soccer, but Boyd was another coach who knew Lara had the capacity to play at a high level.

“Her game needed to be developed for the Division I level, because she played too slowly, held the ball too long and we just needed to bring her up and make her less predictable,” Boyd said.

A decision to medically redshirt came later during Lara’s freshman season, giving her an extra year of eligibility to pursue a Master’s degree in communications. Lara goes to school in order to pay back her parents, who sacrificed so much.

“My mom gets low-income and is basically in poverty, so it's hard when your mom calls you asking for help, and there’s not much I can do for her right now,” Lara said.

Lara is the first in her family to graduate from college.

“Her journey has been a long one and she’s such a good person,” Boyd said. “And you think, not only is she the first one in her family to graduate from college, but she’s getting her Master’s and that’s incredible.”

Lara’s parents divorced before the beginning of her senior year of high school. Her mother was unable to provide for all three of her children, making the decision to send Lara and her brother with their father.

“I love my parents both equally so when they call and say business is not good it's hard, but it’s a motivator to keep pushing hard and get a master’s degree and get a better job,” Lara said. “When I get out of school I am going to settle down and help them out because my priority is to have them not work anymore.”

Lara said it is her faith that has given her the strength to keep pushing forward despite her many obstacles along the way.

“I honestly play for God because the obstacles he’s given me have made me a woman,” she said.

With Lara’s college career drawing to a close, she doesn’t want to be remembered by her career statistics. Instead, she wants the focus to be on her work ethic.