Sun Devil Athletics cracking down on enforcement of bag policy

While entering the ASU vs UCLA football game in Sun Devil Stadium on Oct. 8 a situation begins to unfold. With a baby in one arm and bag in the other, a woman tries to transfer all of her child's belongings from diaper bag to an ASU-approved clear plastic bag.

She was among the many fans running into issues with ASU's newly implemented clear bag policy. The policy states that the only bags fans are allowed to bring into the stadium are either see through or meet the small size requirements.

By no means is this only ASU's policy, the clear bag policy has been adopted all throughout college sports, including Alabama, FSU, Cal, Auburn and Ole Miss to name a few. 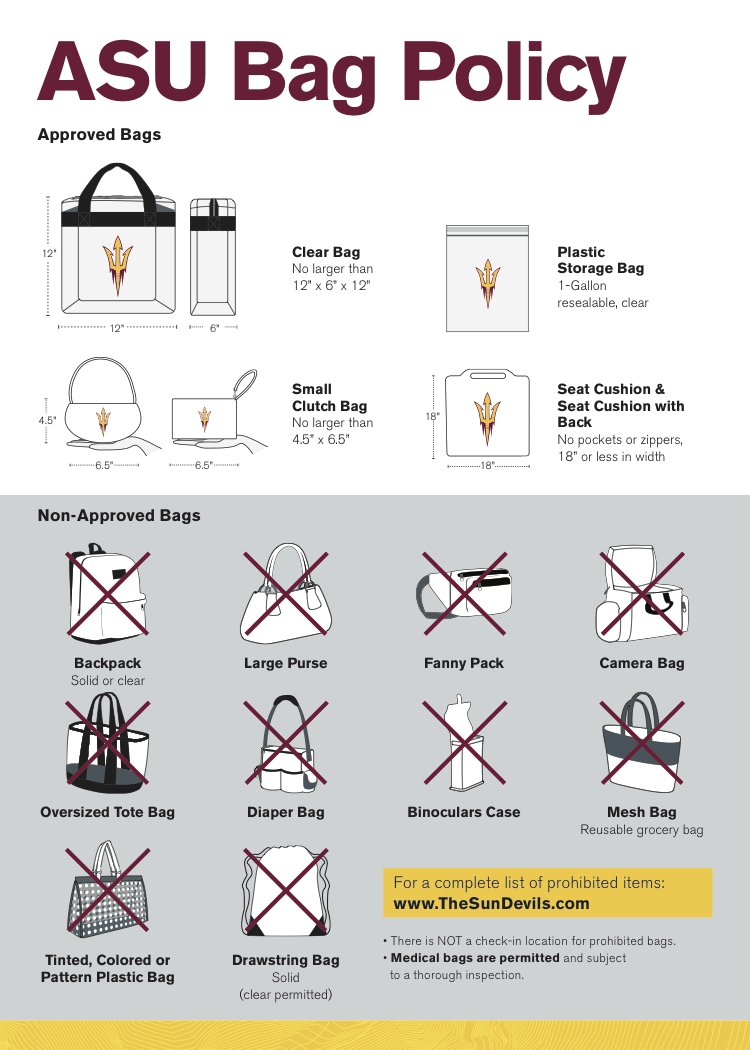 According to Margaret Emmons, corporate communications specialist for Sun Devil Athletics, the purpose of the policy has to do with the speed of fan entry to the game and their safety.

“The clear bag policy was instituted to one, help fans get into the games quicker because it expedites the security policy," she said "It also enhances the safety of our fans."

With thousands of fans entering the stadium on game days, the question was raised if the policy would be strictly enforced, if enforced at all?

“I think we knew there would be a learning curve,” she said.

For that reason the policy was not strictly enforced early on in the season.

“For the first couple of games we were a little bit more lenient on how we were enforcing it; because what we didn’t want to do was have someone bring something valuable and turn them away,” Emmons said.

Similarly, to help students get situated with the new policy ASU gave away clear bags on the Downtown Phoenix campus while students received their wristbands. They also gave them away outside of Sun Devil Stadium before the Texas Tech game on Sept. 10.

Emmons said ASU has become stricter recently on the policy after previously setting out to make helpful reminders for fans so they know the policy.

“We have communication outside all the games, we’ve given handouts, it’s on the tickets, we also provided clear bags as giveaways,” she said.

However, Joseph-Ramos Mata, criminology and criminal justice sophomore doesn’t believe those enforcing the policy are doing their job well enough.

“The policy is mediocre at best in how it is enforced," he said. "I have seen them stop some people, but I also have seen them let others pass by because they don't pay enough attention.”

Many of the students voiced their annoyances with the policy after being turned away from games and other events.

One fan, for instance, argued with a bag checker at the UCLA game because she didn’t have a clear bag and all her items wouldn’t fit into the one-gallon plastic bag they offered to provide her.

The security staff member enforced the policy and the fan and her two friends walked away without entering the stadium.

J.D. Loudabarger, associate athletic director for Athletic Operations & Facilities for Sun Devil Athletics, said that Sun Devil Athletics is focused on continuing to educate fans rather than making changes to the policy or its enforcement.

“Sun Devil Athletics will continue to communicate this policy in all available channels to help educate patrons prior to arriving to Sun Devil Stadium with a prohibited item/bag,” Loudabarger wrote in an email.

In fact, Loudabarger said there seems to be no update for the policy in the near future.

“Sun Devil Athletics continuously evaluates all of our game day policies," he wrote. "At this time there is not any major suggestions for a change in this policy.”

“I think it’s being pretty well enforced, people are getting the gist of things and understanding clear bags only,” Combs said.

She initially noticed the leniency in the enforcement of the policy that Emmons said was part of the plan.

“A lot of people didn’t know so they were more lenient, but I feel like the next couple games they will be more strict,” she said.

According to Emmons, Sun Devil Athletics has been stricter on the enforcement of the clear bag policy as of late.

“For the first couple games we weren’t as strict with enforcement as we now have been for the last two,” she said.