I kid you not: ASU alumna starts goat yoga in Gilbert

Say Baaaamaste with this creative new way to exercise

Attention yogis and goat enthusiasts; Goat yoga has made its way to Arizona.

Although the trend originally began in Oregon, this trend was recently brought to the Valley by longtime friends and athletes Sarah Williams and April Gould.

Williams got her start at ASU with a degree in exercise and wellness and went on to become certified in yoga and pilates.

After teaching yoga for nearly 15 years, Williams decided to open her paddleboard business, where she rents out paddle boards and teaches paddle board yoga at surrounding lakes.

Gould owns the three-acre farm in Gilbert where the classes take place in the middle of a field. The eight goats, some dressed in costume, wander around and are incorporated into poses.

The Nigerian Dwarf goats are dressed in outfits ranging from fairies to pirates and come with names like “ninja,” “warrior,” “Smhoo” and “Chainsaw.”

Gould said that many of the goats were bottle fed and are read bedtime stories as part of the family.

With five goat yoga classes so far, they are adding classes through December to keep up with demand. They are also planning special goat costumes, like turkeys and Santa Clauses, for upcoming holidays.

Gould and Williams have been friends since high school and competed on the show American Ninja Warrior.

Williams was on the show in 2013 and Gould in 2015. Gould was dubbed “The Goat Whisperer of Gilbert.”

“When she was training for Ninja Warrior she was doing all of these push-ups and squats with the goats,” Williams said. “When we had the idea to do goat yoga, I’m like 'April is the perfect person to partner with because her goats are already so nice.'”

Williams and Gould are also busy teaching parkour and paddleboard yoga in the midst of the goat yoga craze.

“I’ve always loved fitness and being outdoors,” Williams said. “It’s actually transferred into being a great thing with the goat yoga.”

With guests of all ages and ability, goat yoga has been filled to the 50-people max during each class. 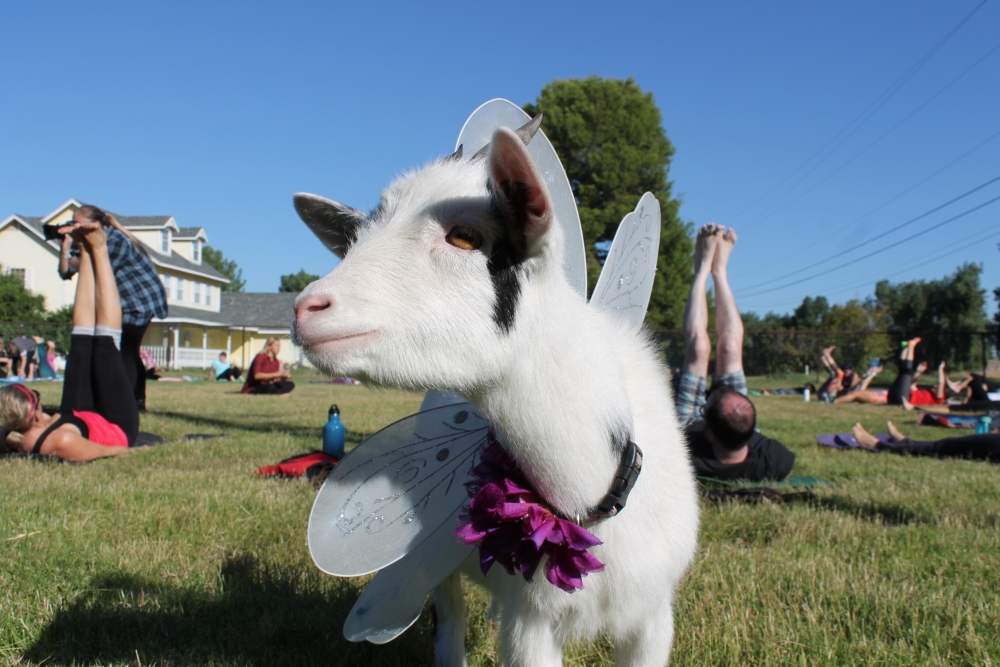 Mikayla Laib came from NAU to a goat yoga class to celebrate her mom’s birthday after seeing a segment about goat yoga on the news.

“We didn’t get her a goat for her birthday, so this is kind of close enough,” Laib said. “We already signed up for a December class, so we’ll be back in a month."

Jennifer Truong just completed yoga teacher training and went to the goat yoga class with her friends to celebrate.

“We just got together to hang out and do yoga with goats,” Truong said. “I probably didn’t do any yoga; I was just trying to play with the goats the whole time."

Truong showed off her acroyoga moves, which are a combination of yoga and acrobatics, and for the first time, posed with a goat on her back.

“They were just so therapeutic, and that’s a huge part of yoga,” she said. “They just real lighten the mood and make you happy.”

Williams highlighted the benefits of doing yoga with goats, including improving physical and mental health.

"The average college student spends way too much time indoors under florescent lights," Williams said. "The goats are so sweet, they love to be held and cuddled."

When asked where she sees Arizona Goat Yoga going, Williams responded that they would like to continue adding more classes and someday get on The Ellen Show.

The next open class is on Nov. 19 and each class is $10. To learn more about goat and paddle board yoga visit their website.