The Sun Devils are not a good team, but N'Keal Harry is a beast on the football field.

After the ugly 49-26 loss to the No. 15 Utah Utes on Thursday night, there really aren't many good reasons to watch ASU football for the remainder of the season.

Except for the fact that the Sun Devils have true freshman wide receiver N'Keal Harry, and he is an absolute stud.

Harry was a jack-of-all-trades during the Sun Devils loss. His final stat line barely makes sense, as he recorded eight catches for 114 yards, threw an amazing pass on a trick play for 46 yards and also scored on an insane 31-yard rushing touchdown.

Get you a Sun Devil who can do it ALL

I still can't explain how N'Keal Harry did that. He dropped the ball on the far side of the field and then, somehow, eluded five Ute defenders and then scampered into the end zone.

That play alone proves how special Harry is. On that play, everything around him was crumbling to shambles, and yet he still managed to make something out of nothing and score.

I'm not the only one who thinks Harry is a special player, as his quarterback Manny Wilkins had positive words about him after the game.

"He's really stepped up and has matured and is letting people know that just because he is a freshman doesn't mean he can't go out there and be the best player on that field," Wilkins said. "He's going to be a special player here for the next few years, so I'm just happy to have him out there."

Wilkins should be happy to have him out there, because Harry makes his life as a quarterback much easier.

On a night where Wilkins did not play his best, Harry bailed him out on multiple occasions and, at some points, was the main factor in keeping the Sun Devils in the game.

He was available all night and had multiple big plays along with critical third down conversions.

Moreover, he was so difficult for Utah to tackle. Harry would almost always require multiple tacklers to take him to the ground and, in the process, he'd gain extra yards.

The ASU receiver was a complete fireball and Thursday's game was his coming out party. 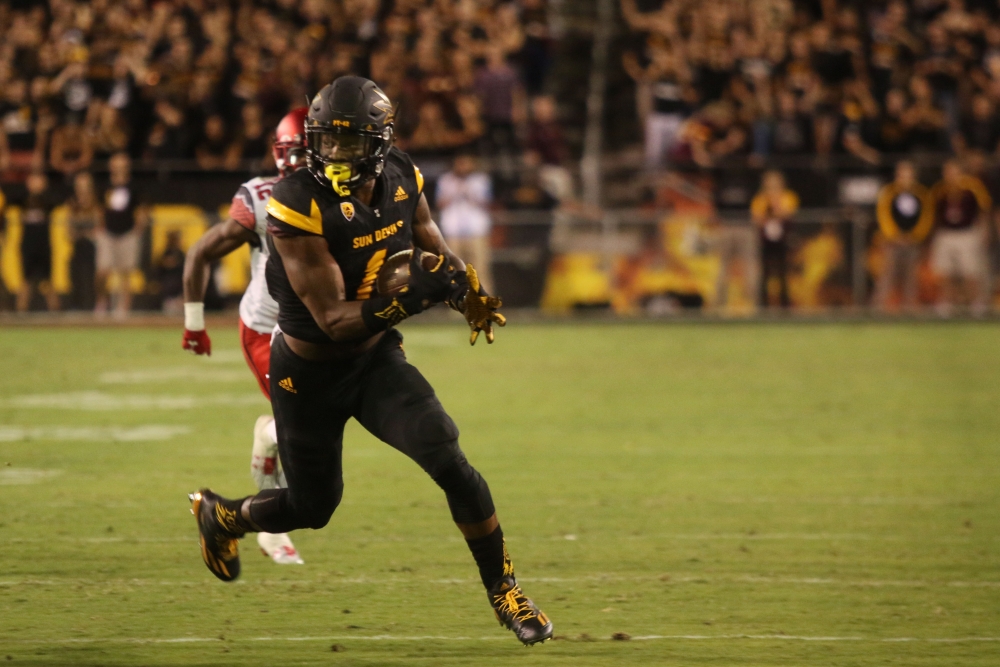 Harry gave us flashes earlier in the season that he was an amazing player.

He had early season touchdowns, including a spectacular one against UTSA, but he didn't ever dominate a game. Some of that was because he was still figuring out how to adjust to college football, and some of it was the injuries at quarterback.

But on Thursday night, Harry exploded onto the scene and, from this point forward, he is the main reason you should tune in to ASU Football.

With the rest of the Sun Devils' offense having inconsistent showings and the defense continuing to play poorly, Harry is a bright light that on a team that in going through tough times.

What's even better for ASU is that Harry is going to be on the team for a few more seasons. He'll be able to improve on his already high level of play while a young team matures and likely gets better.

And while guys like Kalen Ballage and Tim White are outstanding offensive weapons, they won't be in the ASU program for much longer. However, Harry can serve as a cornerstone for the future of the team.

Over the next few years, Harry is going to make some unbelievable plays. His showing tonight gave us a glimpse of what he's capable of.

His speed, instincts, route running, hands and toughness already make him a great wide receiver and he's still just a true freshman.Coach Todd Graham agrees, saying, "that guy is a warrior, I mean unbelievable for a freshman."

"He has what you want in a player. I was very, very impressed with him."

The Sun Devils aren't a good team this season, and they may not be great in the near future, but having N'Keal Harry on the team for the next few years gives them a sensational player that is only going to get better.

And if you're an ASU fan, that has to feel pretty encouraging.