In the era of parity in college basketball, it's not rare for a power conference team to fall to a seemingly undermanned side in early-season play.

ASU men's basketball avoided that burden Sunday, brushing aside the Cal Poly Mustangs 96-74 at Wells Fargo Arena behind the dominance of their backcourt.

Early on, it was a clear emphasis for The Sun Devils (2-0) to get their guards involved in scoring as much as possible, but those shots weren't falling. ASU made just five of 13 jump shots and shot just 40 percent from the field in the first half.

To supplement their shooting issues, the Sun Devils turned to junior guards Tra Holder and Shannon Evans to do some dirty work in the scoring department. 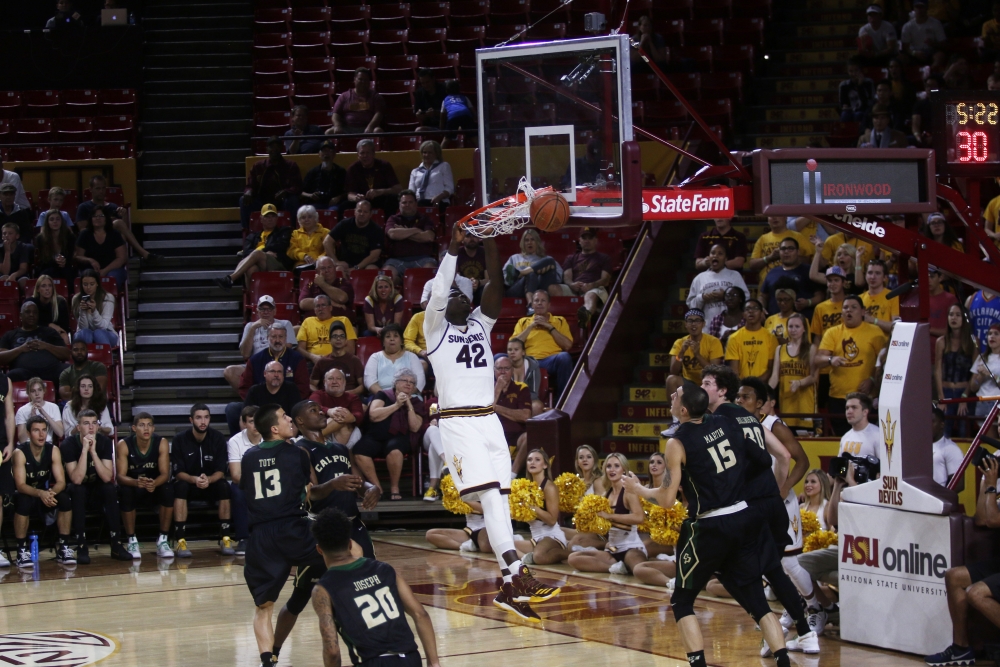 In the first two games, teams have rotated post players out to cut down passing angles for the guards and keep them in check. However, thanks to a renewed emphasis on freedom of motion for ball handlers, Evans and Holder have taken advantage of those matchups.

"It's natural that if teams switch a five-man on a point guard they're not going to be able usually to guard that player without putting their hands on him," ASU head coach Bobby Hurley said. "So having guys that can break down a defense on the dribble puts yourself in a great position to get to the free throw line."

The Sun Devils did just that, breaking up Cal Poly runs and getting easy points by shooting 42 free throws — compared to 22 by Cal Poly — to keep their shooting woes to a minimum.

Evans, who shot 4-of-10 from the floor but 12-of-12 from the line, took advantage of the rule in an attempt to get a rhythm in offensive sets. That allowed him to fill the stat sheet with 20 points.

"We really like the new rule," Evans said. "We just try to stay aggressive... I knew getting to the line would get me going and I felt like we both tried to do that."

With ASU struggling from the field, Cal Poly saw an opening and took it, bombing 3-pointers and cutting into an early deficit — eventually taking a lead late in the first half and keeping the game close. It was tied at 53 all after a timeout roughly a quarter of the way through the second half.

"It's been a crazy weekend outside of our little world here with a lot of upsets, which is going to be more of the norm in college basketball," Hurley said. "For us to have to respond, I think is a good thing for us."

From then on, though, it was all Sun Devils. Over the final 14:02, ASU outscored the Mustangs 43-21, including a devastating 12-0 run towards the end of the game that pushed the lead over 20 points.

With its tuneup done for now, ASU prepares to travel to Orlando for the Tire Pros Invitational, where the Sun Devils will play Northern Iowa Thursday and two other power conference schools for their first real tests, but Evans doesn't seem fazed.

"We're excited," Evans said. "We're going to go back to the drawing board tomorrow, touch up on a few things and get ready for Florida."