Surrounded by his robots, Dr. Wenlong Zhang poses for a picture. He laughs looking down at the camera screen through rectangular wire-rimmed lenses and asks to be sent the good ones.

In the picture, he rests his arm against its mechanical twin — a towering robotic limb resembling one that might hoist metal into place in car commercials. Nike tennis shoes with wrapped in tubes and battery packs lay on a desk, a two-legged experiment leans against binders and hockey puck robots accumulate near a desktop computer.

“There are a lot of labs here that focus on building the robots,” he says. “Our lab focuses on making them smart.”

Technology has the potential to create a collaborative world where tech complements humanity, and Zhang is determined to build that link. He is an assistant professor and director for the ASU Robotics and Intelligent Systems Laboratory, leading a crop of innovative student researchers from the Tempe and Polytechnic campuses.

As he sits in an office chair, he pivots and gestures toward different contraptions and picture boards throughout the lab. White boards scribbled with equations, algorithms and notes feature different handwritings — different minds, different ideas.

Around him, the work of his researchers decorates the lab with half-built quadcopters and wires. A track on the ceiling ends in a curtain of netting — a safety precaution for the humans in the room if a flying robot were to go rogue. The quadcopters are shoebox-sized drones with four rotors, similar to what Amazon may one day use to deliver packages in the U.S. The half-Lego, half-spy gear robots are part of a research project aimed at creating a swarm of flying, seeing technology that can operate autonomously, or without human input. 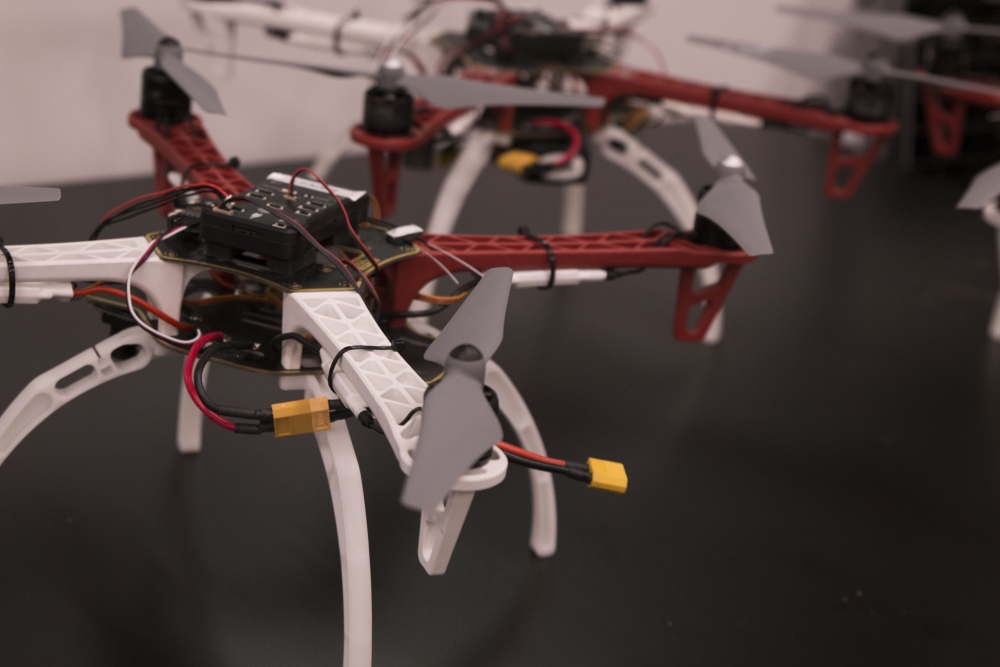 Several e-pucks sit grouped together, like green hockey pucks, but with wires, wheels and the ability to communicate. Both the e-puck ground robots and the flying quadcopters are subjects of Zhang’s hope to create collaborative algorithms to allow technology to interact and understand one another.

Zhang is fascinated with the concept of technology working together cohesively with humans, making actions more efficient and safer for people. The tall mechanical arm he leaned against before, for example, is like one that would be found on the floor of a factory. If a worker got in its way, it wouldn’t know to avoid him. Now, researchers in the lab are looking for ways to not only allow the arm to sense and avoid harming a person, but to have it cooperate and continue working alongside him as a part of the team.

“The way I convince myself this will work is by seeing how well it works for humans,” Zhang explains.

Network robotics — sometimes referred to as swarm robotics — is a collaborative way for robots to work together intelligently. In this type of research, a group of robots operate independently from one another, communicating and understanding when actions warrant commands. They could also be programmed to operate without human control, behaving autonomously, depending on their surroundings and the commands of other robots in their network.

If there were an earthquake today, Zhang explains, lives might be put in harm’s way to go into the rubble and begin rescue efforts. But eventually, he sees a swarm of quadcopters flying above the damaged city to count collapsed buildings and construct a map of debris-free streets before rescuers even arrive.

Then, the information could be sent to ground robots to move as a unit and turn valves to stop gas and plumbing leaks before they cause fires or floods. Together, both the air and ground robots could sense signs of survivors and notify rescuers of exact GPS locations.

In other, less extreme ways, Zhang believes applications of network robotics could be applied to everyday life.

“A happy robot is one that is saving energy by being more efficient,” Zhang says. He laughs as he says that would make him happy, too.

Zhang’s research spans many fields and ideas, moving as his brain does, from topic to topic as he invents new applications, scenarios and analogies as quickly as he speaks. His clarity in explaining the complexities of systems engineering displays a level of expertise and a knack for teaching.

Before delving into the research world of ASU in August 2015, Zhang’s academic drive led him to the completion of four degrees: one Bachelor degree, two Masters and a Ph.D.

Overlapping from his Ph.D. research, is his rethinking of gait analysis and rehabilitation. Zhang has been working to develop a way to reteach people to walk, especially after a stroke, accident or disease. Smart Shoes are tennis shoes modified with coils of air tubes beneath the soles. 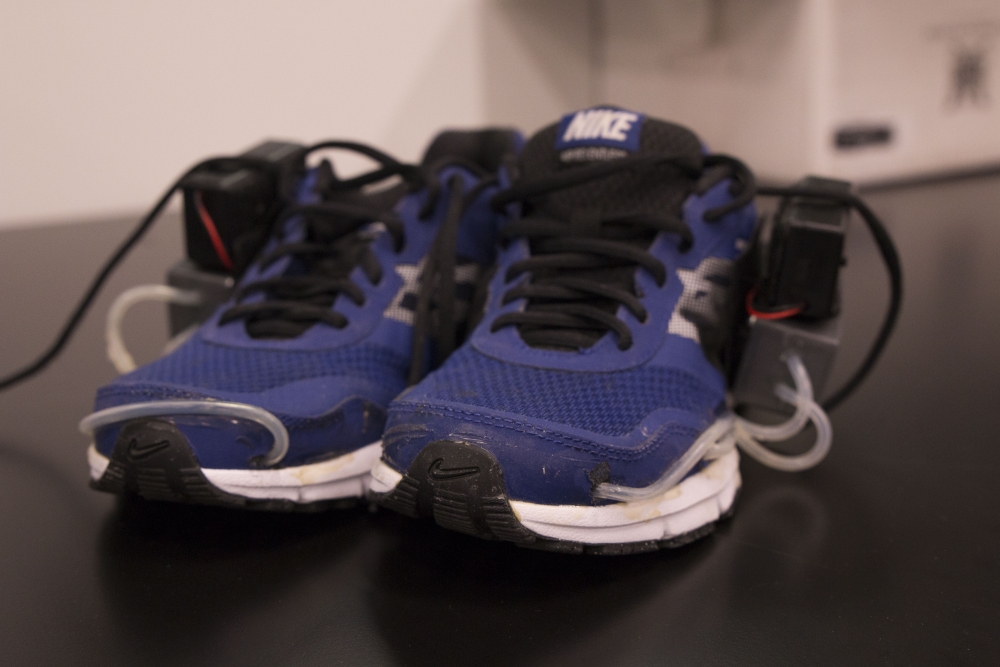 As a person takes a step, they place pressure on different parts of their foot — which is closely monitored by the air pressure within the tubes. With this specific information, physical therapists can clearly see where abnormalities in movement are being made, and therefore provide apt feedback for patients.

In Zhang’s lab at ASU, this research has been taken a step further by Prudhvi Tej Chinimilli, a Ph.D. candidate, who is advancing the technology to track micro-slips in a person’s step. Micro-slips are tiny abnormalities in the way a person’s foot contacts the ground — these small slips have the potential to either result in a fall or be tracked and corrected.

When Chinimilli presented his findings to Zhang and the group, he explained how the technology knows what activity the patient is engaging in — whether they are moving up or down stairs, walking, jogging or standing. With this technology, people who already have trouble moving can get through physical therapy from their own homes — without having to travel to a rehabilitation center. Eventually, there is potential for virtual reality to be incorporated into the in-home therapy as well.

Zhang’s academic background led him to explore the realms of systems engineering and the math that makes robotics possible. From a young age, he knew that engineering was a field he could grow into, where he could explore and collaborate with many different people.

His earliest interests in the tech world ignited with the liftoff of a rocket on TV, and a thought that wanted to be able to make that happen. Zhang was born in Harbin, China, a city near northern Russian border.

He says that a massive influx in immigration in the 1920s from many different European countries allowed him to learn and grow in a city where street corners held history from every culture and religion in their architecture. The city where his family still lives, Zhang says, is a part of how he came to find passion in the science of working together.

He received his first degree, a Bachelor of Engineering in Control Science and Engineering, at the Harbin Institute of Technology near his home city. Then, he began emailing universities in the United States.

“I have this strong motivation,” Zhang says. “Some students didn’t like the math, but I knew I had to get through it to do other things and understand them. So, I was happy I was doing it.”

After graduating from Berkeley in May 2015, Zhang brought this intuition with him to Arizona. He now directs a group of Ph.D., graduate and undergraduate students to innovate, build and program robots — especially ones that will be able to understand each other, communicate and process information.

Miles Mabey, an undergraduate engineering student, is working on his honors thesis, with Zhang as his director. Under Zhang’s guidance, Mabey will experiment and conduct research using a two-legged robot able to move in a human-esque way.

“Me and my friend decided it would be a cool idea to pitch our thesis idea early,” Mabey says. “A week later, Professor Zhang had borrowed a biped robot from another department, and we were starting to figure out which one he would get for our lab.”

Zhang says he saw the thesis project as an opportunity to grow the lab and learn alongside his students, bettering himself in areas where he doesn’t have as much experience. He says he is always looking for ways to improve himself and learn from those around him — which is why he surrounds himself with researchers, professors, students and people who like basketball.

Coming to a massive university like ASU, Zhang sees opportunities to grow, teach and succeed alongside his students and researchers. The size of the engineering program alone played a role in his decision to teach at the University. He says he is constantly looking for different ways to incorporate other projects into his own, even if the areas seem too different at first.

“ASU is a big university,” Zhang says. “I can meet many different researchers. I am always looking into collaborations with other professors — like the robots looking to collaborate with each other.”

He smiles at the comparison.