As protests have broken out all over the country in response to President Donald Trump's travel bans, ASU students followed the same trend with a silent march on Friday.

As hundreds of silent protestors marched through downtown Tempe, beginning at the Islamic Community Center of Tempe, the loudest sound was the applause coming from the citizens standing by.

While the protest focused on the travel ban, many of the protesters also held up signs opposing Trump’s plan to build a wall along the border of Mexico and U.S.

The protesters gathered at 4 p.m. and kicked off the protest with a call to prayer, which involved followers of different religions praying side-by-side.

The protesters began marching a little after 5 p.m. The march was promoted as “We Are All America – Silent March for Peace,” on Facebook.

The protesters ranged from all ages, faiths and ethnicities, and including many ASU students.

Anikki Giessler, a chemical engineering junior, said she marched in a display of unity.

“A lot of people are afraid right now,” Giessler said. “We are marching in solidarity with those who are afraid.”

Hamdi Hamad, a construction management graduate student, said not knowing where these policies would lead brought him to the protest.

“Those guys are banned today, I may be next, someone else may be next,” Hamad said. “Who knows who will be next?”

Hamad also expressed the importance of the diversity in this protest.

“We’ve got Christians, Muslims, Jewish [people],” Hamad said. “Everyone is here, I think that explains everything.”

The hundreds of protesters were lead by leaders of other various faiths who held up signs with things like "#WeAreAllAmerica" written across them.

The marchers made their way up Mill Avenue, many holding up signs which said “Love For All.” The protesters were met with applause from many of the witnesses.

While the protesters gained support from some witnesses, shouts of "Trump" and "He's going to build that wall" came from passing cars.

Beth Swadener, a justice studies professor who participated in the march, said the response from the crowd reflected the country's current division.

“We always appreciate the support but we also acknowledge that we are a divided country right now,” Swadener said. “This march is really about healing those divisions and it’s about love, not hate.”

The marchers circled back around Mill and made their way to the ASU bridge overlooking University Avenue. The protesters held up their signs as they lined up on the bridge, receiving cheers and honks from cars passing by.

After moving on from the bridge, the protesters finished with one final call to prayer to wrap up the evening.

Amy Aboalam, a high school senior who participated in the march, said that despite the jeers from some of the passersby, she thought the event got its message of unity across. 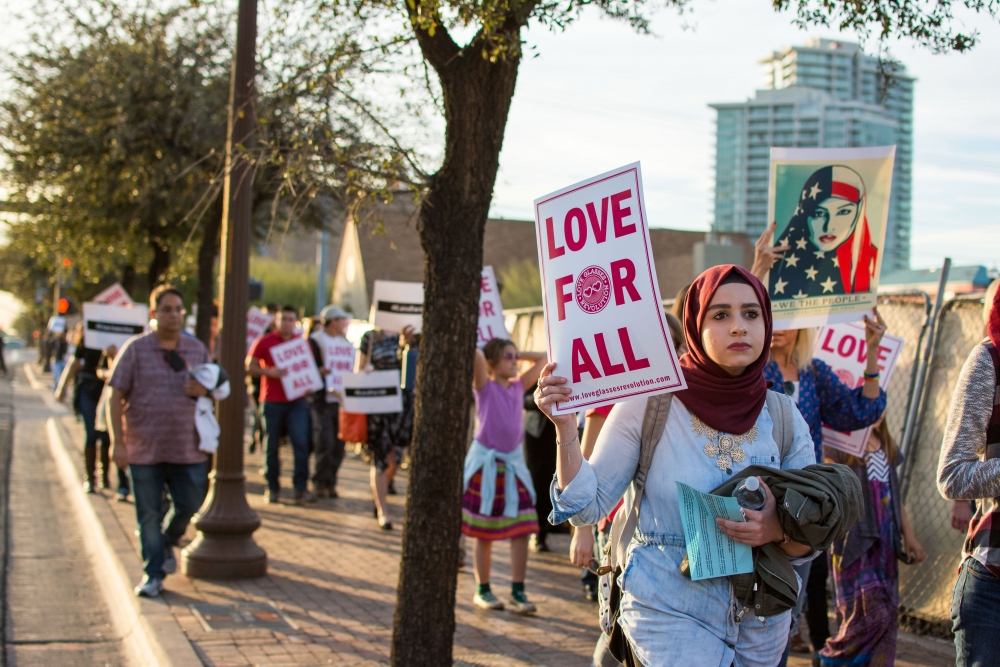 ASU hockey completes weekend sweep against RIT on the road

By Walker Smith and Nikash Nath