It’s the start of a new year and that means gyms are going to see an influx of customers trying to burn off holiday weight. For a lot of college students, the need to have the right attire is almost as important as the need to get back to a fighting weight. People walk around in Nike, Adidas and Lululemon which can be intimidating for those on a budget. Seeing people wearing high end clothes that a lot of people — especially college students — can’t afford is a major blow to confidence for some.

If this anxiety-fueled image sparks a feeling of recognition, just imagine an athletic wear company whose mission was to provide people — college students in particular — with affordable, high quality products. That’s what Arizona State University senior and biochemistry major TJ Uli is working to achieve with his company Ascension, a high-end athletic wear company he launched earlier this year.

“I’m a personal trainer on the Tempe campus,” Uli says. “Athletics is one of my passions, one of my main hobbies. I figured it would be a good way to help other people enjoy my passion while also doing something I can enjoy at the same time.”

After he graduates with a biochemistry degree this May, Uli will be applying to pharmacy school. He sees the business as something to do on the side, so he wanted to start it now before life gets busier than it already is for a college student on the verge of graduation.

“I think people have a fear of starting something in college because they feel overwhelmed. I’d say ‘Do it now while you have the time before you graduate’,” Uli says. “If I wasn’t a senior and didn’t have some extra time to be working on this, it would be harder than it already is. It’s not easy but if you just sit down and think about it for awhile and figure out how the logistics of it are going to work out before diving right it it makes it a lot easier.”

Starting a company while in college may sound daunting, but luckily for him, Uli isn’t doing this all on his own. He’s received words of advice from friends he’s made at ASU. One of these friends is junior and construction management major Peter Mettler.

“TJ’s a good guy, smart person. He has a great work ethic and will do almost anything for what he wants,” Mettler says. “I’ve helped him with refining his ideas and being a soundboard for him to voice his ideas to. He has a lot of great ideas and I try to make him see both good and bad sides of them to make sure what he wants to do is sound.” 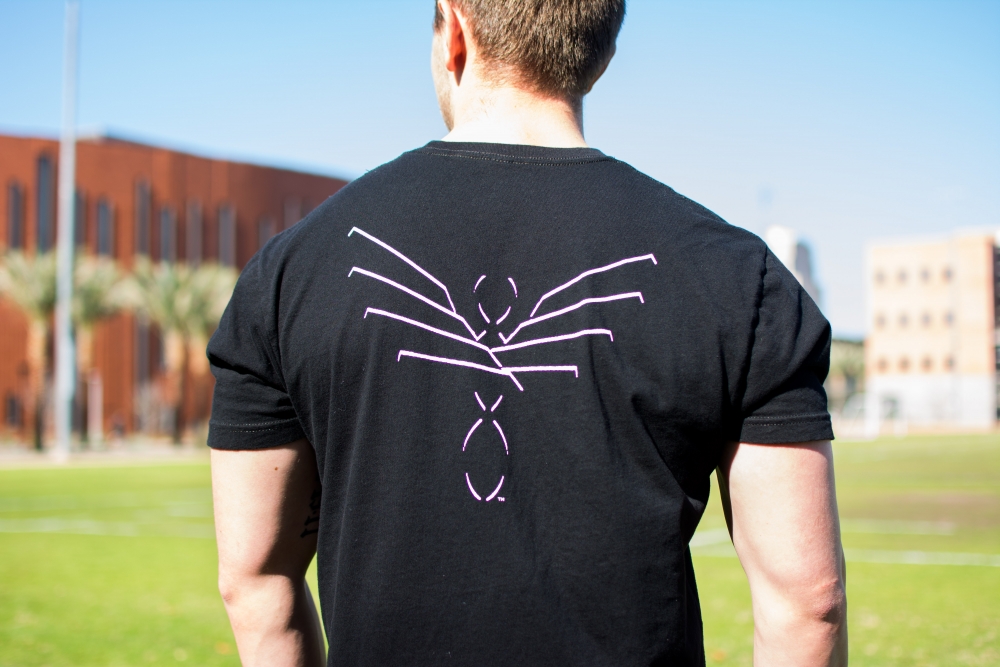 In the coming weeks, Uli will have representatives don samples of his active wear around ASU’s Tempe campus and the area around it to generate interest in his brand before officially launching his first round of products. Currently, Uli plans to sell tank tops and t-shirts for both men and women. One difference between his product and products like Nike is the price, but that’s not all.

“My product is more affordable and I would say more simplistic in it’s design,” Uli says. “It’s more based off of comfort and how you’re going to feel in the gym to make yourself feel more capable of being able to perform better. One of the things I worry about as a personal trainer is, OK, yeah that looks really cool, but are you actually comfortable working out in that?”

Down the road, Uli has considered selling his products online on sites like Amazon or Etsy if there is enough demand.

“I’ve thought about selling my product on other websites, but it’s just more competition and more efficient for the local community if I just sell them on my website for now,” Uli says.

According to Kim Ruggerio, professor of practice in marketing at W.P. Carey School of Business, the key to a successful business is successful marketing. People need to be aware of their market before launching, know the niche they are targeting, and most of all they need to be passionate about their product.

“Know your customer. Customer intimacy is important when launching a new brand. What are your differentiators in the marketplace?” Ruggerio asks. “Are you going after people who do yoga, running, hiking? The needs for each of these customers are different. If the student has done their market research on what is out there, what niche are they going to fill, then absolutely, yes, launch with your eyes wide open.”

Uli’s friends have no doubt that he will find success no matter what he does. This venture in particular, Mettler believes, will have great success because the U.S. places so much emphasis on fitness.

“Even though America is in the top three nations in the world with the highest obesity per capita, I find that there is a huge emphasis on exercising in this nation,” Mettler says. “It’s a crowded market and that means fierce competition but TJ’s the kind of guy that won’t give up on his ideas too easily even if the odds are stacked against him.”

Students on the Tempe campus should begin seeing Uli’s representatives soon, and the product soon after.

“We’re looking at launching in late January, early February,” Uli says. “I just ordered a bulk for my reps. They’ll be around campus for a bit. They’ll start selling around that time, I don’t have a specific date yet.”

For more information about Uli's company or to keep an eye out for a time when orders will be accepted, check out Ascension Athletic Apparel and Lifestyle on Facebook or his website.