From Binge-drinking to Innovative Thinking

A look at ASU's decade-long transformation

For what seemed like ages Arizona State University was synonymous with “party school” with media often portraying the school as one big frat party and the students as if they were all too drunk to care about grades or degrees.

But, there’s been a shift in that mentality over the last decade, solidifying the university’s metamorphosis from No. 1 party school to No. 1 in innovation.

“It’s a remarkable time in the history of ASU, it’s truly a good place getting better,” says James Rund, senior vice president of educational outreach at ASU. “It is achieving things that I owe a huge debt of gratitude to ASU President Michael Crow for his leadership, his vision and high and unyielding standards for the enhanced performance of the students and faculty.”

A State Press Magazine survey recently found that of 225 respondents, 46.2 percent of people thought mostly of “innovation” when asked about ASU while 23.1 percent thought of ASU as a “party school.” 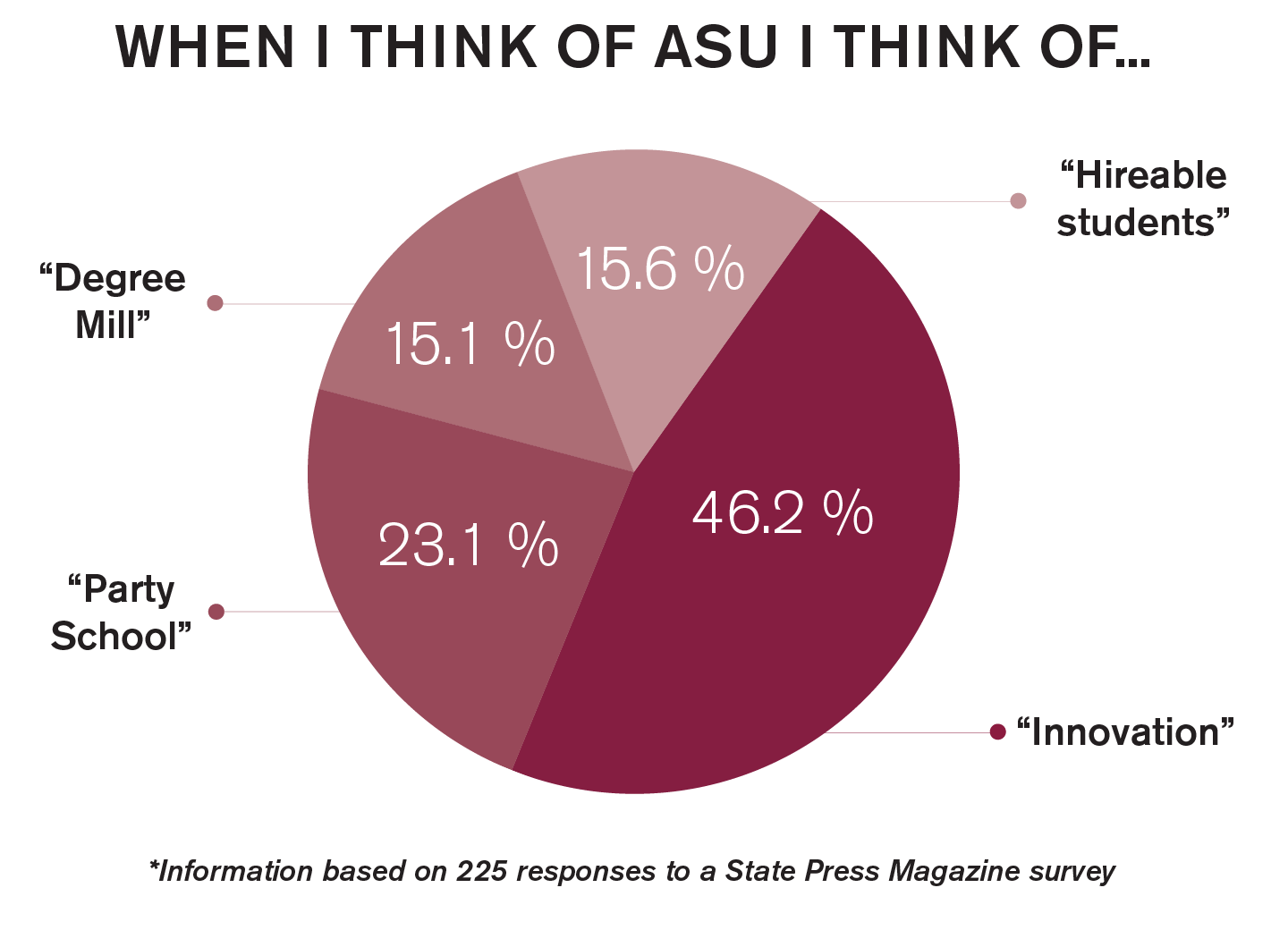 1987 marked the first year ASU became a staple on party school lists culminating in the number one spot in 2002, the same year President Michael Crow and his crew came on board.

But for the last four years, ASU has been left off all party school rankings and has instead grown to be the number one school in innovation two years in a row.

The Making of A Party School

Playboy and the Princeton Review release lists aggregating the top party schools in the nation based on a similar methodology.

Playboy explained in an email to the Huffington Post in 2014 that they determined the rankings based on “access to nightlife and musical events, and creativity when planning social gatherings.” The magazine also used information from the National Center for Education Statistics, the NCAA and the U.S. Economic Census.

David Soto, director of content development at the Princeton Review says its rankings come directly from the way students feel about their own university. 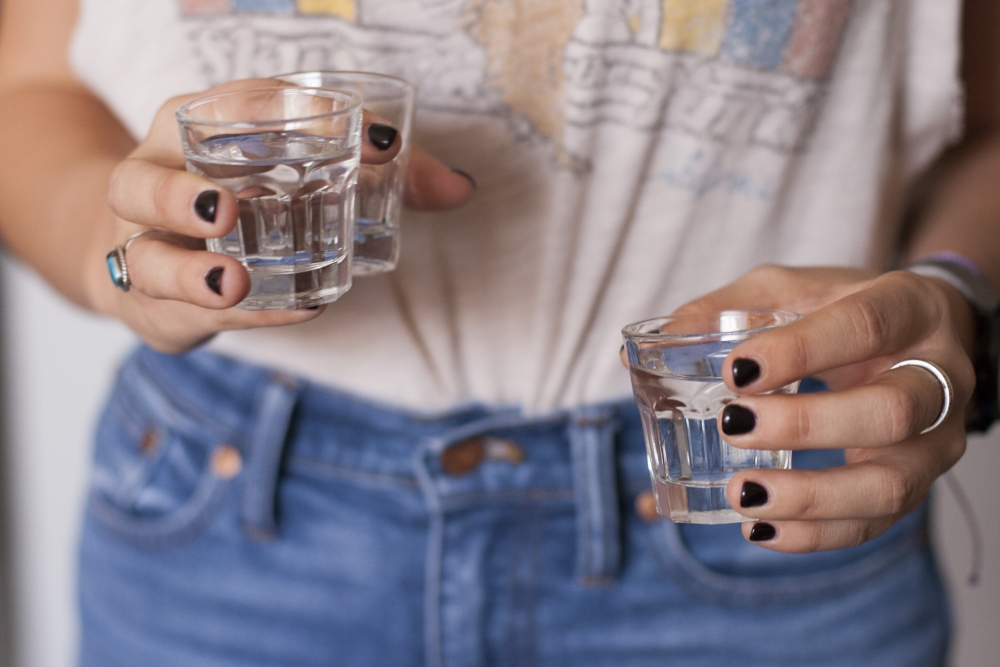 “We collect data from 381 schools resulting in 165,000 individual survey responses of college students answering questions about their school that leads to our rankings,” Soto says. “Our list is based on student responses because we want to go to the real experts on the matter, and that is the students.”

“The Top Party Schools list is more so to help students and parents to help determine the atmosphere of a particular college and doesn’t really determine for a lot of people where they should or should not go,” Soto says.

Soto, an ASU alumnus himself, says while the list doesn’t typically sway people from attending a university, it sometimes happens that a school makes an effort to curb the party scene on campus after being on the list.

“It can kind of be an agent of change on campus,” Soto says.

Dr. James Rund, a staple at Arizona State University since 1992, attributes the shift in atmosphere in large part to ASU President Michael Crow who began his work with the University the same year it was named the top party school in the nation.

“He felt strongly about the need for the institution to focus on the individual colleges and schools,” Rund says. “There were very strong, prominent colleges within the institution and President Crow focused on building the identity of those schools. It was an important part of the overall enhancement of the university in quality and perception that also had a synergistic effect in the pride of students and faculty in the institution and in individual schools and colleges.”

Rund says that ASU went through a period of major change when Crow came on, and he attributes ASU shaking its party school identity to one of the biggest changes that affected students. 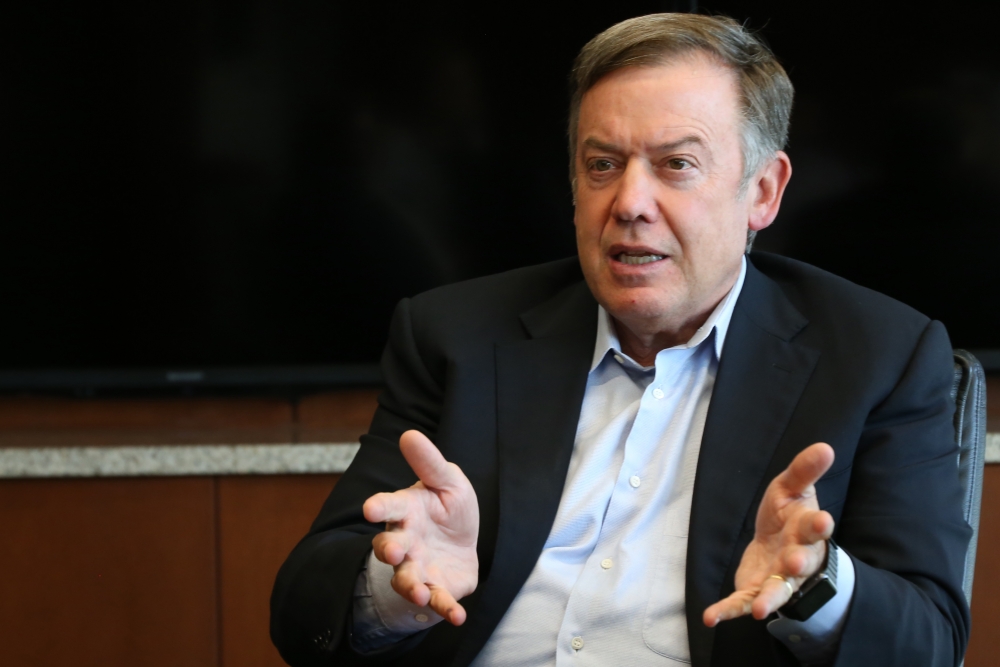 Before 2002, students would come to the University and for two years would only be permitted to take general studies classes. After that period of time, a student would be able to apply to a specific college or school and then for the remaining two years would be a member of that institution. Rund says with Crow’s vision, students would be admitted to ASU in the schools and colleges that fit their desired major.

“I think to me, one of the most substantive changes came in the form of students being admitted to their desired college when they were admitted to the university,” Rund says. “It created an immediate sense of identity and purpose for the students. It’s really something we kind of take for granted now, being admitted to the major in their freshman year and becoming directly connected to the reason they came to the institution in the first place, rather than having to wait for two years.”

Crow had several visions when coming to ASU, including the enhancement and transformation of integral schools into renowned research hubs and while those changes were important, Rund says a major shift in the university’s atmosphere.

“Upon coming to the institution, students were able to to immediately begin taking coursework that they cared about and that had a profound impact on student’s intention, engagement and achievement, truly more profound than any of the other dynamics on campus,” Rund says. “That direct engagement with their area of inquiry was a very big change.”

Rund says while party school lists may draw attention from media and students, the University elects to focus on other accolades.

“The lists that are important are the ones that speak to the quality of students and faculty,” Rund says. “International competitions and the other lists are of more value to us in measuring the university. Party school lists are often about selling publications. People have interest.” 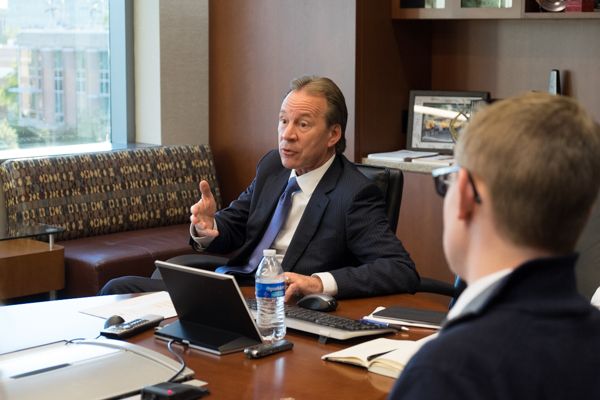 Rund says another contributing factor to ASU falling off the party school lists is there is a fluidity with the nightlife at the University.

“It goes in cycles, there is an ebb and flow with student’s interest and engagement in the school which can deter from other activities,” Rund says. “This generation of students has a level of engagement and that bodes well for the school and the priorities of the students.”

But nothing, Rund says, is more important than student engagement with their schools from the get-go and the engagement of students early on in their collegiate career is what has really helped to morph ASU’s public image. 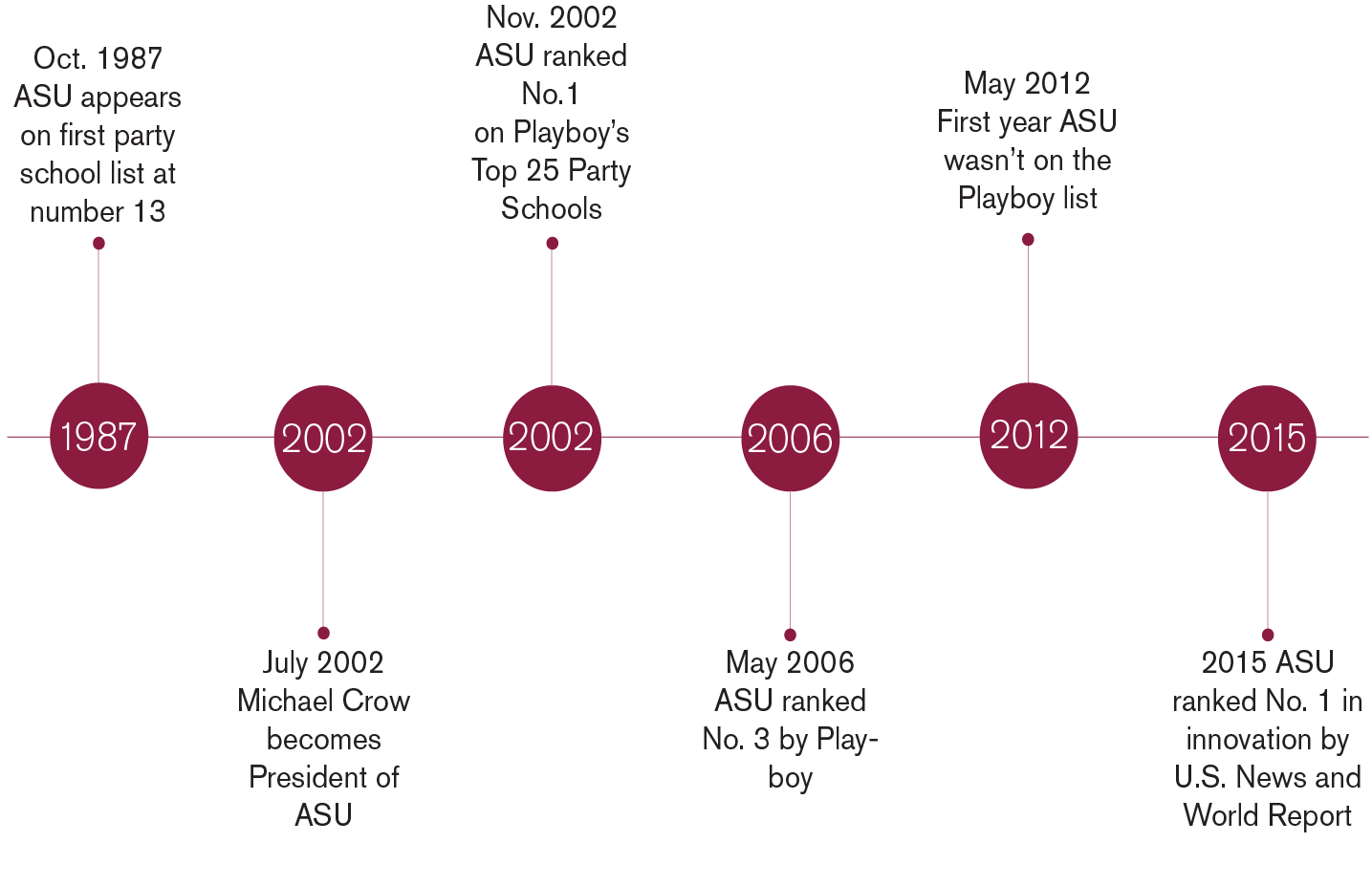 “Involving students in every facet of life at ASU is where the magic is,” Rund says. “Having them involved in research and professional programs and entering the school of their choice from the beginning is huge for students. It’s really a synergistic effect and it’s invigorating for the rest of the staff. We are really building human potential and positioning students for success, those are the things that matter.”

A Show of Force

The University’s placement on the party school lists has historically not determined the actions of the ASU Police Department, according to Lt. Terry Lewis.

ASU’s police department has added personnel and deterrent classes in the last decade, but only because of the growth of the university, Lewis says. Lewis says party-related incidents were much more common before Alpha Drive, colloquially referred to as Frat Row, was torn completely down in 2012.

“The number of people attending parties has decreased due to [the addition of] Adelphi and Alpha Drive frat houses no longer being present,” Lewis says. “With the frat houses, there were larger parties. Now, with more dorm rooms, the parties are just smaller and more numerous at times.”

Police officials have always stressed alcohol awareness on campus and have changed their method in the last decade, but not their message.

“We have always made classes and information available regarding dangers of underage drinking and drug awareness, as well as patrol officer enforcing a Zero Tolerance policy when it comes to underage drinking and drug possession,” says Crime Prevention Officer Becky Garcia. “Classes are provided through ASUPD Crime Prevention Unit and are ongoing and available to all departmental staff, students, and faculty.”

Garcia says the Crime Prevention unit has taken a more proactive approach in the last 15 years as well. 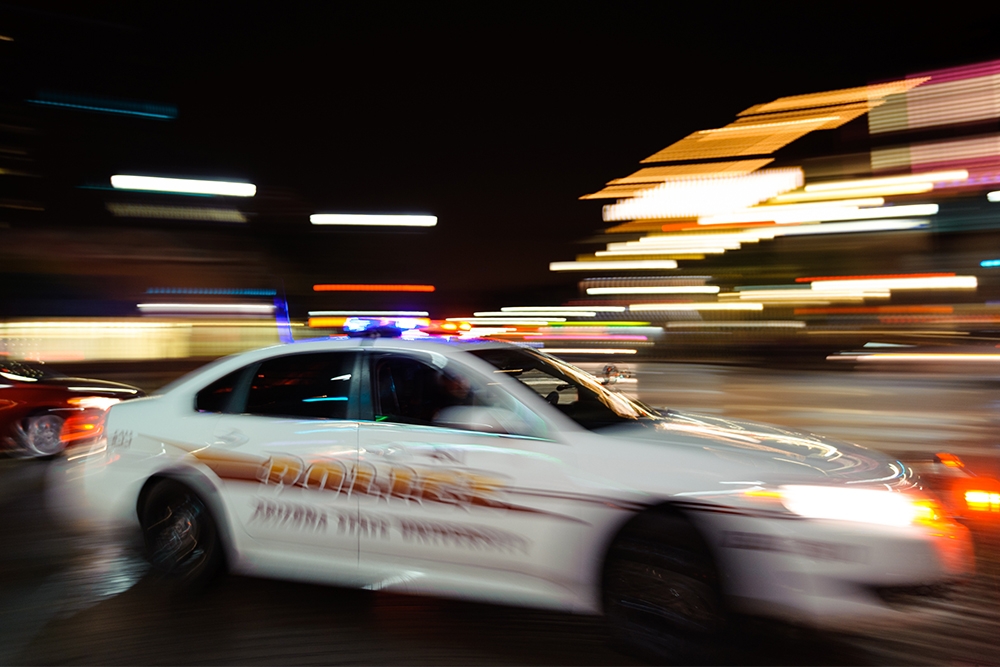 “This includes talking to students about alcohol and drug use prevention at New Student Orientations,” Garcia says.

“We also meet with student organizations on all four campuses to make sure they know the ASUPD Crime Prevention Unit appreciates any opportunity to speak with their groups about any issue or topic. We always include personal safety and the dangers of alcohol and drugs. Many students are also very interested in knowing the potential legal consequences that can arise from an arrest, which is a deterrent itself.”

ASUPD officials state that they haven’t seen a drastic change in crime in the years that ASU was put on any party school list. Lewis says the only changes in crime happen when the population increases dramatically at the university.

In 2013, the last time ASU appeared on any party school list, alcohol referrals and arrests on the Tempe campus totaled 2,863. In 2015, the same statistic was 2,553. Though lower, there isn’t a stark contrast between the two figures.

Many students say ASU has been misconstrued and have had a positive experience while at the university.

“Everyone told me that ASU feels like a party school,” says Ileyna Whitenstein, a painting sophomore. “I think any school can be a party school, it just depends on if you go to the parties or not.”

Whitenstein says that what people told her ASU would be like, and what it has actually been like has been completely different. She says she’s enjoyed her time here and has nothing but positive sentiments about the University.

“When I think of ASU I don’t think of partying, I think of the pretty campus,” she says.

Finance freshman Cesar Castro says when he thinks about ASU he automatically thinks about the W.P. Carey School of Business and “amazing weather.”

“I think it’s a great school, the people are serious about their studies but also know how to have fun,” Castro says. “No one is super uptight or takes themselves too seriously.”

From binge-drinking to innovative thinking: Ask an expert from The State Press on Vimeo.

Reach the editor in chief via email at Alexa.Dangelo@asu.edu or Twitter at @andangelo15 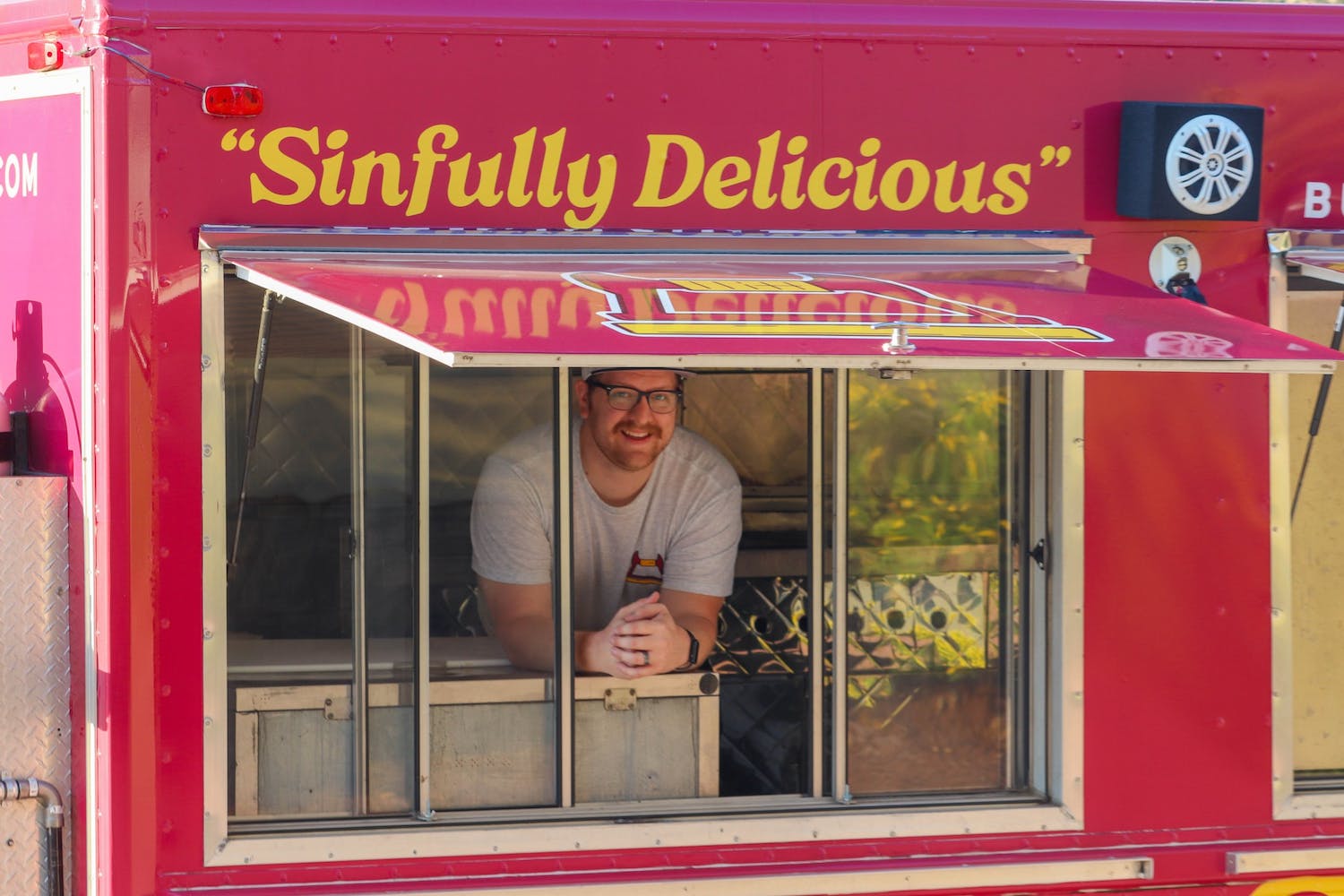 A Sun Devil-inspired food truck is heading towards ASU