The Sun Devils stayed, but their standing will likely shift with a tough upcoming schedule

Every Monday, The State Press will be taking a look around the Pac-12 men's basketball landscape as the conference tournament in Las Vegas nears.

This week was one of the rare instances when the best and worst of the Pac-12 Conference excelled, while those jockeying for position in the middle of the standings stumbled. 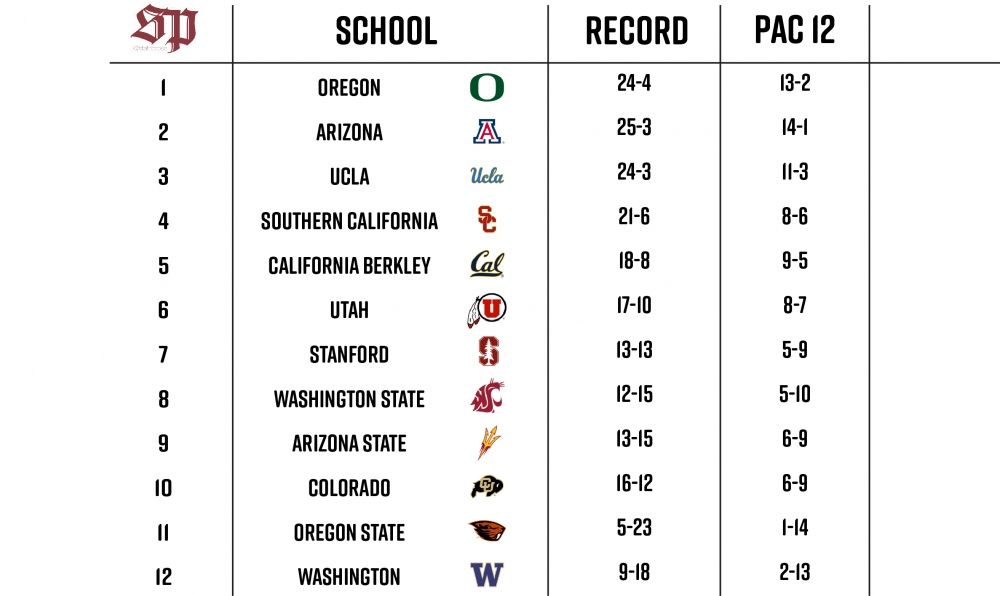 With four wins in a row, the Wildcats have rebounded nicely from their loss in Oregon a couple weeks ago. The Wildcats get to play their final three games in the state of Arizona but have to host No. 5 UCLA in one of the country's marquee matchups.

The Bruins redeemed their January loss at Galen Center with a 32-point win over crosstown rival USC. Freshman guard Lonzo Ball had his fingerprints all over the game, leading his father to once again assert that Ball is among the best basketball players on the planet.

The Ducks have clinched a bye in the Pac-12 Tournament but still have a lot to play for in the final two weeks. Oregon can't afford to let up down the stretch against weaker competition, especially with two Pac-12 teams ranked ahead of them in the AP rankings. Three road wins would bolster their resume for the selection committee and could give them a No. 1 seed in the NCAA Tournament, even without winning out in Vegas.

The Golden Bears sit squarely on the NCAA Tournament bubble, but a loss to Stanford threatened their status on the edge. A head-to-head win over USC gives Cal an inside edge at the final bye in the Pac-12 Tournament, but style points are necessary for the committee to see in the coming weeks.

The Trojans had an opportunity to climb into the fourth seed in the conference tournament, but fell to UCLA Saturday. USC has four more chances to pass Cal, but no head-to-head meetings leave the Men of Troy with grasping at straws.

Entering the weekend, the Utes needed to finish their season strong for a chance at March Madness but may have ended their trek before it started. Utah is the Pac-12's version of the San Diego Chargers after becoming the lone bright spot for Oregon State's depressing season, losing at Gill Coliseum and brightening the wintry skies in Corvallis, if only for one night.

The Sun Devils finished Saturday's loss to Washington State with a 2-21 scoring margin over the game's final 7-plus minutes, losing sole possession of seventh place in the conference in the process. The good news for ASU is that its final three games are at home. The bad news? Two of those teams are in the AP top five.

The Buffaloes, too, had an opportunity to make their mark on the conference, but took one on the chin from Oregon in a drubbing at Matthew Knight Arena. Home games the rest of the way give Colorado a good chance at maybe even the sixth seed in the Pac-12, but uneven play has cost the Buffs all season.

Despite atrophy around them, the Cardinal refuse to break out in the muddle of the conference. Stanford knocked off Cal and are a half-game behind ASU and Colorado in a tight bottom-half of the Pac-12 standings.

The Cougars continue to be a bugaboo for ASU this year, as they picked up their second win of the season over the Sun Devils. In fact, ASU is the only team the Cougars have beaten twice in a season since Oregon State and USC in 2011-12. Wazzu actually topped the Beavers three times that year, as the Cougars advanced past Oregon State in the CBI semifinals.

Rejoice, Beavers! This year's iteration of Oregon State will not go winless in Pac-12 play, as they won their first conference game Sunday night against Utah, holding on to a win despite two late Ute possessions down a point. Instead of being historically bad, the Beavers can hold onto that one win when their season is ended on the first day of the Pac-12 Tournament.

The Huskies have dropped nine in a row, but nearly beat both Arizona schools at home this weekend. Freshman guard Markelle Fultz put up identical shooting lines from the field against both Arizona and ASU (7-16, 2-6 from 3-point range), cementing his status as the best freshman in the country, despite a lack of team success.

ASU football outmatched in home loss versus No. 13 Utah