Every Wednesday, The State Press will be taking a look around the Pac-12’s uber-competitive women’s basketball landscape as the conference tournament in Seattle nears. With each team fighting for a shot at a NCAA Tournament bid come March, each weekend’s Friday-Sunday set of games should be full of exciting action and marquee showdowns.

If the season ended today, the brackets for that conference tournament would looks as follows, based on conference record:

Here’s our third weekly Pac-12 Women’s Basketball Round-Up heading into another weekend of conference play, including storylines, top performers and power rankings, as well as a look at the bracketology projections of ESPN’s Charlie Creme.

Kelsey Plum isn’t the only prolific scorer in Seattle. Natalie Romeo, a senior guard at Washington, poured in a career-high 32 points on 10 three-pointers in the Huskies' win over California Friday night. Although she was held scoreless two days later against Stanford, Romeo proved that when she gets hot, she can be a vital spark for her team.

The Beavers still own the beaver state, but not by much. Oregon State swept their rival Ducks in a home-and-home series Friday and Sunday, winning the two games by a combined 10 points. The two tight wins kept OSU hovering just outside the AP Top 10, and kept Oregon firmly on the bubble, as the Ducks continue to search for resume boosters going down the home stretch.

Player of the Weekend

Showing off the mid-range game! @KristineAnigwe with 15 points & 6 rebounds in the first half https://t.co/dMITiBV50s 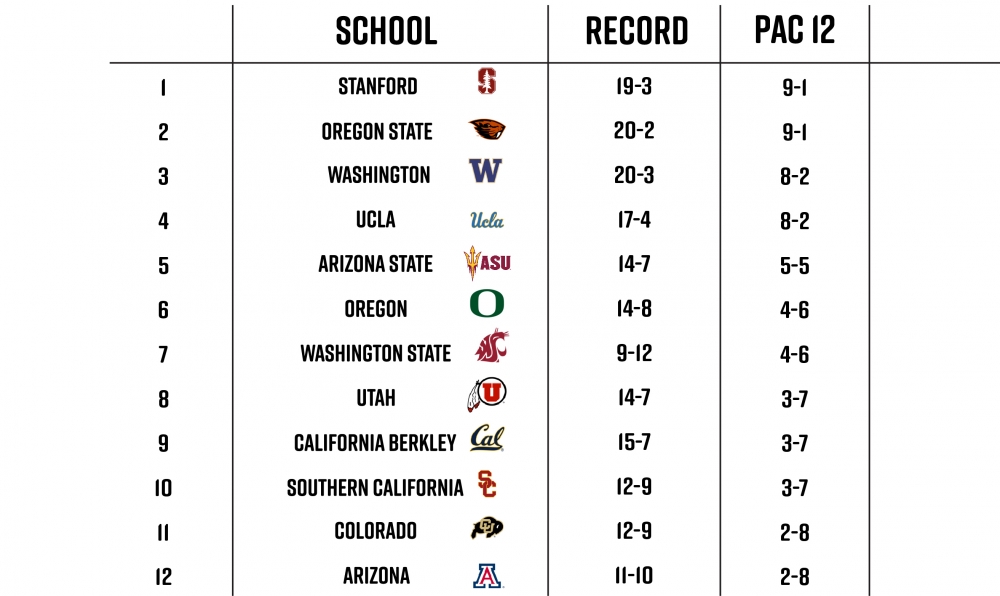 #7 – Washington State (9-12, 4-6) | LW: No. 9
Last Weekend: vs. Stanford (L, 76-54), vs. California (W, 84-79)
Breakdown: The Cougars’ win over California essentially kept their season afloat; WSU only remains alive because it ranks fifth nationally in strength of schedule. The Rocky Mountain schools await this weekend.
This Weekend: @ Colorado (Fri.), @ Utah (Sun.)
Bracketology: Out (EVEN)

Games to Watch This Weekend

No. 11 Oregon State @ No. 23 Arizona State – Friday, 6 p.m. MT: The Sun Devils are in need of a marquee win going into the final few weeks of the regular season, and a home game against Oregon State could provide that opportunity. The Beavers certainly have other plans, and will look to stay hot with another Top-25 victory.

No. 13 UCLA @ No. 8 Stanford – Monday, 7 p.m. MT: Stanford is riding high after knocking off Washington but will need to stay level-headed with the talented Bruins coming into Palo Alto. UCLA, once favored to potentially win the Pac-12, can put itself in position to do so with a road victory at the always unfriendly Maples Pavilion.