ASU fights underrepresentation of women in the arts

Discourse about the  plight of women in STEM is common at ASU, but many female students in art fields feel they face just as many challenges, with the added obstacle of less media coverage. By raising awareness of the issue, some professors are working to make these programs more equitable.

Some ASU arts professors and students notice a higher number of women enrolled in arts degrees, but also felt that the high number is not reflected in how many women become playwrights, producers, or hold leadership positions in the art fields.

Michael Satterwhite, a male student pursuing an art studies degree, said he noticed a bias against his female counterparts at school.

"When someone wants to get a painting done or commission a piece, they always seem to come to me and my male friends before they'll come to a female student," Satterwhite said. "It's not always consistent, but there's definitely a bias favoring male artists."

Faculty members in ASU art programs reported that they are acutely aware of the problem of women getting passed over for roles and jobs and are working to change it from multiple angles. 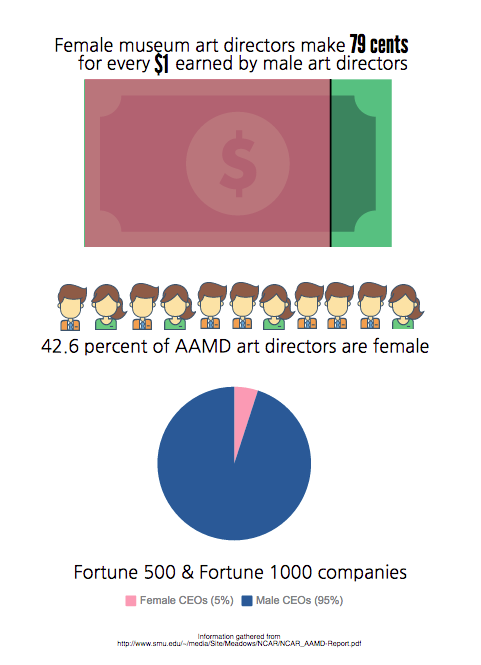 The two largest theaters in the Phoenix metro area,  Phoenix Theatre and Arizona Theatre Company, produced no plays written by women during their 2016-17 seasons.

Lance Gharavi, a Herberger faculty member and the artistic director of ASU's MainStage productions, said he is actively trying to combat the under-representation of women in theater by being conscious of the shows that he chooses for the season.

"We want to lean toward equity without becoming obsessed with numbers," Gharavi said.

Gharavi said while their production of Titus Andronicus is very male-dominated, MainStage is also producing a show called Men on Boats that is only acted in by female and gender-nonconforming students.

"Equity is not only in authorship of plays, but in the kind of stories that get told, and whose stories get told," he said.

The art school is working to not only increase opportunities for female students, but to educate the students in arts programs on the ongoing challenges women face in art fields.

Bonnie Eckard, a theater professor, says that the Herberger Institute for Design and the Arts is working to create an "ongoing dialogue" concerning the issue of female underrepresentation.

"We don't operate in isolation of the culture we live in, and our overall culture is very male-dominated, across the board," Eckard said. "When people leave ASU, we hope they will be aware of this imbalance, so they can advocate to get more equity or be in a leadership role where they hire people to be more representative."

Art students are already reporting that this open dialogue within their insular community is making a noticeable difference in the way male and female counterparts consider each other.

Patrick Askins, a film major, said he personally still encounters issues of women not having the opportunity to work on sets except as make-up crew, but he sees an overall improvement in equity for all.

"Equity is a topic heavily discussed ... it's trending toward getting better," Askins said. "Anyone sticking to older, more traditional ways of running shows becomes noticed and ostracized by the community. "

While students in the art world may be aware of the issue, faculty said they were also concerned with the idea that people outside art fields may not be aware of the gender-gap — in order to truly achieve equity, they said, the dialogue needs to extend to people of all backgrounds.