Get to know the DeGravina 2017 executive ticket, one of four tickets running in this year’s Undergraduate Student Government elections on the Tempe campus. Aundrea DeGravina, a psychology and political science junior, is running for president. She is joined by vice president of policy candidate Dayton Potter, a global politics and film production junior and vice president of services candidate Rilee Robinson, a political science and public relations sophomore. 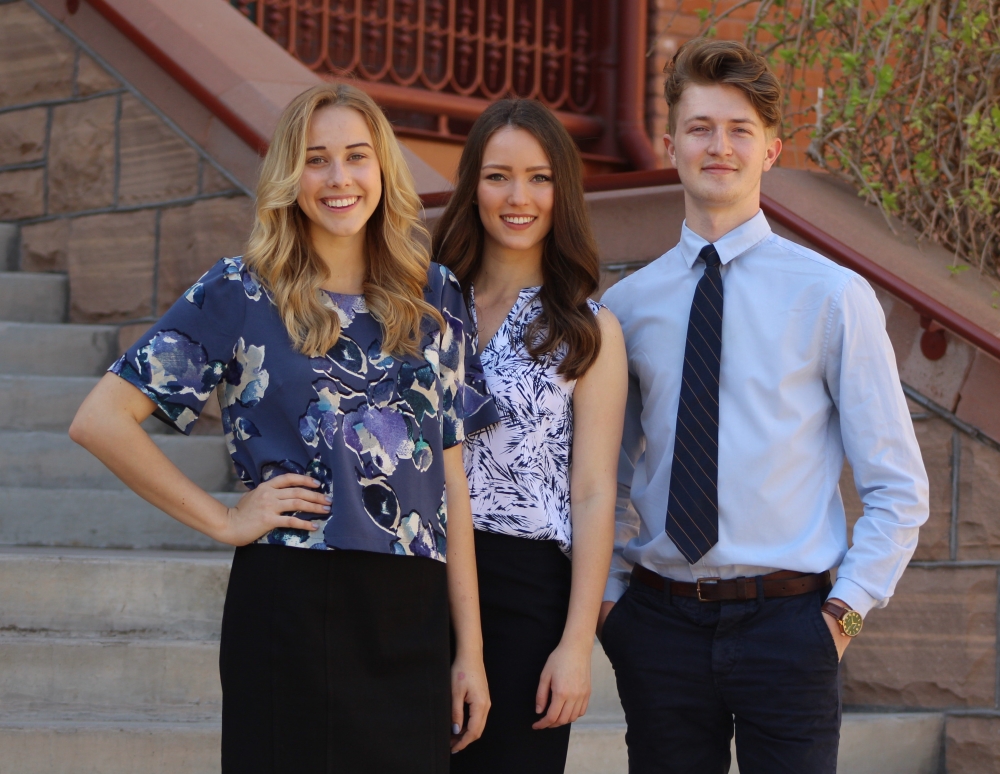 Dayton Potter: “I’ve noticed that there’s been a little bit of a disconnect between the state of Arizona and ASU recently, most notably the last two years. It really doesn’t feel like we’re being represented to the state government. So, the ... main thing that I’m trying to work on is relationships."

“I plan to have a group of student advocates going to the capitol, you know, as regular as about a month, so we can forge those relationships. Like I said, it’s a pretty bad relationship right now.”

Rilee Robinson: “The initiative I’m most passionate about is offering legal services for students. What we want to do is partner up with Sandra Day O’Connor downtown, and we want to have students be able to get free legal advice. A lot of law students have to do pro-bono work in order to get a job after graduating, so they would definitely be in on this, and this is something that’s been done at other big universities.”

“Another thing that’s important on our ticket is protecting and preventing sexual assault. We know that this is a really hard issue to talk about, but we think that, first of all, students need to be able to have these conversations with each other.”

“We also think there needs to be tangible ways that we can protect victims. So, what we want to do is get something put into the (Student Code of) Conduct that says that a victim’s previous sexual conduct, or the attire that she was wearing, can not be used against her at a hearing.”

Aundrea DeGravina: “So, there’s two things I’d like to focus on in my platform. Mental health awareness on campus. There’s a lot of statistics that can be thrown around about how big of a problem it is for our students, and the problem is that we don’t have conversations.”

“The one thing I do want to do is have a campus-wide mental health campaign. I want to get all stakeholders to the table.”

“The second part is making sure that student government is viewed as a resource for students.”

“When we talk with people, I want people to know that our mission, ultimately (is) …. We serve the students.”

“I want to have two outreach events a month, so we can see what the students are looking for in their Sun Devil experience. We can’t pretend to know all the answers, and we can’t speak on behalf of the thousands of students that are on this campus.”

Thoughts about USG Elections keeping you up at night? Reach out to us to find out how and why we are #RealPeople with #RealResults.

Why are you qualified for the positions you seek?

AD: "I did spend two years in student government as a senator for the College of Liberal Arts and Sciences."

RR: “I have seen USGT from an outside perspective, as I’m currently serving on the Downtown (Phoenix) campus as a Cronkite senator.”

“There’s a lot of commuter students and a lot of double-majors, and I don’t think they’re being represented on the Tempe campus as well as they could be.”

DP: “I’m a senator for WP Carey, I got elected last year. Before that, I was an intern with the policy department. I started with the government operations committee, so I’ve been writing bills a lot. I think I’ve written more bills than anyone else in the Senate this year.”

“As the VP of policy, you need too be able to understand that you can be wrong sometimes. But, you need to make sure that you’re doing the outreach and you’re talking to people.”

What motivates you to run for this office?

AD: “I did run last year, that can’t be ignored, I am the crazy one to try this twice. I think the reason why I’m driven to do this, get up, lose sleep, not sleep at all period, is because I’m really passionate about our campus community. I really think that student government is great, but I really think we can be doing so much more.”

“I’ve seen the really great things that we can accomplish Downtown, and I think Tempe could be accomplishing more.”

DP: “Mine's a bit of a combination of the two, actually.”

“ASU is huge, there’s obviously no denying that, it’s the largest public university in the country. With that, comes a lot of responsibility.”

“I feel like I can represent people, people that don’t have voices to speak out or are normally afraid to speak out. I’m there for them, and they can speak through me.”

Read More: Everything you need to know about USG elections, a voter guide