Artists and scientists are often stereotyped as opposites: the former as flowery, creative spirits and the latter as mechanical, matter-of-fact beings.

The university setting is the perfect place to debunk this myth.

This semester a group of ASU students has partnered with University researchers to share their scientific findings through the arts in a trans-disciplinary project that has allowed dancers and composers to collaborate with scientists in groundbreaking ways.

The results will culminate in a performance Wednesday evening titled “Science Exposed: Bringing Science to Life through the Arts.”

From the research lab to the stage

One aspect of the performance involves turning science into movement and dance. Institute Professor Liz Lerman led a class called “Animating Research” with a mix of about a dozen students from a variety of backgrounds and majors.

Lerman said the focus of the course was on translating scientific material and information into artistic performances the public can understand and connect with.

“This goes along with President Crow’s idea about the New American University, and how research doesn’t just live on the shelf when it’s done,” Lerman said. “These dances don’t just live on the stage and then they’re over. In both science and art, the purpose of our work means to expand beyond the tiny universes of our field. Projects like this move the needle in that direction.”

At the beginning of the semester, Lerman invited researchers from the ASU Biodesign Institute into her class to explain their work. Her students then each selected a researcher to shadow and work with to develop a performance piece based on their work.

Lerman had three requirements for each resulting performance. First, the students had to illustrate something the researcher was doing that could be understood without interpretation. Second, they had to personalize it. Third, they had to make it interesting to the public.

The result is different for each student. One student created a series of ballet dances about how beautiful viruses can be under a microscope, while another focused on advancements that allow researchers to photograph movement of atoms and molecules.

A third student, named Roopa Singh, has collaborated with a researcher working to demonstrate that salmonella can be used to cure colon cancer in mice — with hope that it can eventually be used to combat cancer in humans.

As a Ph.D student in justice studies Singh said this is her first class of this nature and she was surprised to find out that ASU researchers were working on an alternative treatment to cancer.

“Just to imagine, wow, maybe people in the future won’t have to go through chemotherapy, will never have to lose their hair, get super sick off radiation, you know? That would be awesome,” she said.

Singh said one of the challenges that ASU researcher Wei Kong helped her realize is the importance of public opinion in funding and resources for scientific research.

“If I’m able to help Wei evoke something to the public that helps shift public opinion around salmonella so there would be a more widespread acceptance of the use of the bacteria to cure cancer, then I will really feel like I’ve done something worthwhile with my semester,” Singh said.

Wednesday’s performance will also showcase the works of Stephen Mitton and Zachary Bush, who are both pursuing their master’s degrees in composition at ASU and spent the semester working with researchers focused on studying Alzheimer’s disease.

Both students have composed five-minute pieces that will be performed Wednesday night by a group of student musicians as part of the "Science Exposed" event.

Mitton said the opportunity to study Alzheimer’s research appealed to him because he has a personal connection to the disease: his grandmother’s husband passed away from Alzheimer’s about five years ago.

“I saw the development of the disease and how it affected both my grandma and her husband at the time,” he said. “I saw how difficult that was and the different challenges it posed. I thought this would be a great opportunity to learn more and write a piece about it.” 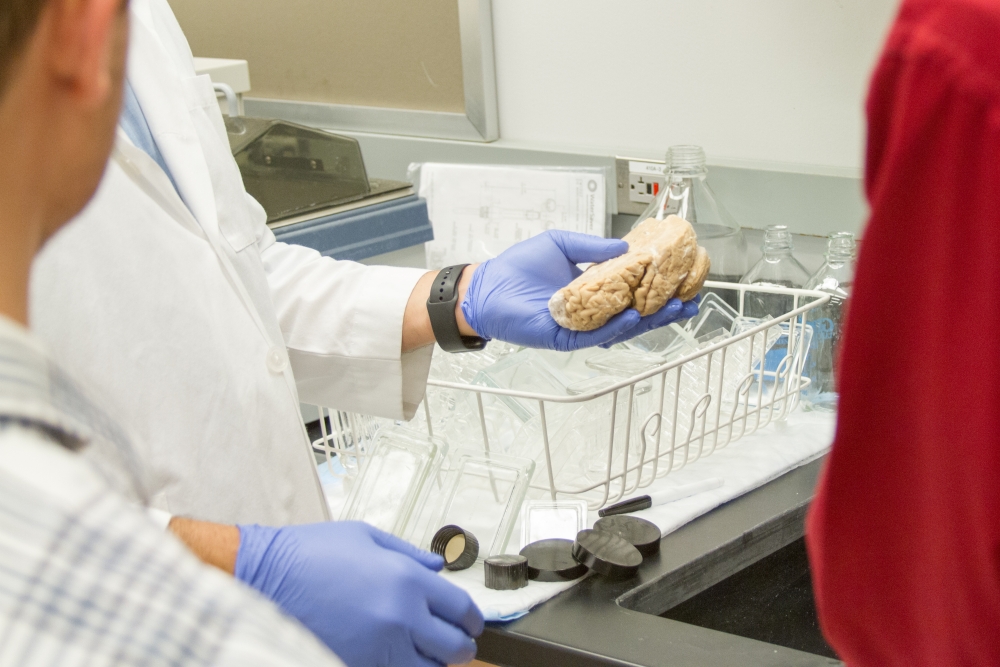 Mitton described his piece as a “very emotional, loose” piece conveying the emotions that Alzheimer’s patients and their caregivers go through.

“My piece has a lot of changes of tempo, very quick changes of mood that are unexpected," he said. "My reason was that Alzheimer’s is a changing disease, so every day is going to be a little bit different.”

ASU research professor Paul Coleman, who welcomed the two composers into the lab and explained his research to them, said he hopes this will spark more collaboration between the fields of science and art.

"This is completely new to me, and I enjoyed it," he said. "I hope that this is something that will continue ... I think that the bringing together of two different worlds that many people think of as being in opposition is a good thing."

The "Science Exposed" performance will be held Wednesday, April 26 at 6:30 p.m. in the Biodesign Institute building. Admission is open to the public but attendees must register online by April. 24.