Parents held a community meeting on Tuesday with the hope that they could do something to prevent the impending closure of the Mary Lou Fulton Teachers College Preschool.

Despite testimonies from over a dozen parents, Teachers College Dean Carole Basile said the decision was final at the meeting, which included preschool executive director Allison Mullady and Senior Vice President of educational outreach and student services James Rund.

“I think right now we are done here,” Basile said in response to a parent’s question about the finality of the situation. “We’re not done with early childhood education. We also have hundreds of students who we need to create a quality program for.”

The original announcement was made in a Feb. 18 letter to parents, but several parents at the meeting said the Teachers College could have done more to salvage the Preschool, which will close on July 28 after 20 years of operation.

“Fix the problem instead of destroying it, deleting it, flushing it down the toilet, then leaving it for nothing and then go “replicate it” somewhere else,” said parent Tianna Stubblefield at the meeting. “You got rid of all the resources. You got rid of the people-capital … those people have more than a price tag, they have experience, they have empathy, they have love, dedication to these children. My son would be lost without them.”

Basile was hired in the summer of 2016 and said in an August interview with ASU Now that she was planning on changing the direction of the Teachers College.

“We are willing to leave past successes behind because we have to be able to move forward,” she said.

But Mullady, who has directed the preschool since October 2014, said she was told about the closure in January.

“I wasn’t involved in the actual decision to close it," she said. "I’ve been involved in trying to facilitate the support afterward — facilitating what we’re going to do with the families, how are we going to support the students, the staff and help them all transition after the closure.”

Basile initially agreed to an interview after the meeting, but she cut it short after one minute when she requested to go off the record.

Teachers College spokesman Paul Gediman provided a statement from Basile the next morning. A follow-up interview could not be scheduled in time for publication.

“We recognize that this has been a blow to the community,” part of the statement read. “While the pre-school in its current form will close at the end of July, we are pursuing other avenues to work with the community in innovative ways to ensure that early childhood education is a priority, and the knowledge that ASU brings to this community work is not lost.” 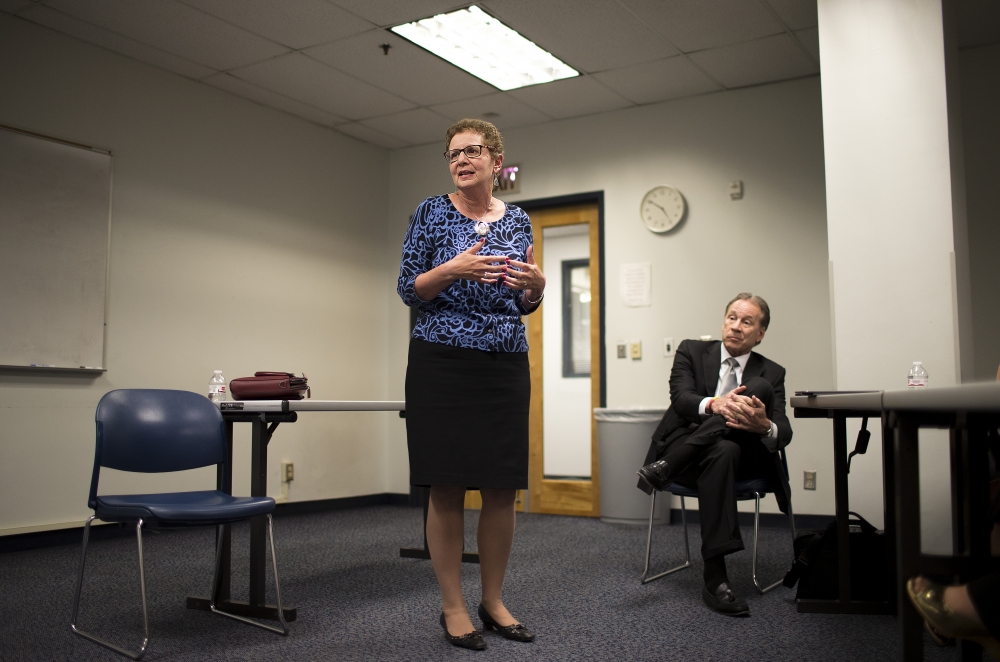 Basile said the preschool closed due to financial issues.

“We’re losing hundreds of thousands of dollars here,” she said during the meeting. “It costs me $500,000 a year, that’s the bottom line. This college has put $2 million into this center for the last three years. It’s not tenable. Unless somebody wants to give us a very large endowment to be able to keep this thing running, then we have to figure this thing out in a different way.”

Budget documents provided by Gediman showed the Teachers College gave the preschool just over $500,000 in operation funds in fiscal year 2016.

But separate budget documents obtained independently by The State Press showed that his figure is a combination of a $400,000 "voluntary transfer-in" and a $100,000 overall budget deficit that resulted in a net $500,000 cost to the Teachers College.

“From a fiscal perspective, we were upside down in this preschool by a lot,” Basile said during the meeting. “The investment has been tremendous by the college, and you have to understand that the money for this preschool comes from the Mary Lou Fulton Teachers College. This is where the dollars are coming from.”

Many parents said at the meeting that the preschool’s struggling financial situation should have been made more transparent before the closure was announced.