After transgender ban, military members wait for what's next

The Department of Defense is reviewing the transgender military ban

On July 26, President Donald Trump announced a new military policy, but he didn’t do it in a press conference or an official statement. In true Trump fashion, he did it on Twitter.

“...the United States Government will not accept or allow Transgender individuals to serve in any capacity in the U.S. Military,” Trump tweeted.

This decision nullified a Department of Defense policy from the Barack Obama administration which would have authorized transgender people to openly serve in the military.

Although Trump's policy has polled poorly and come under fire from military officials, one ASU veteran said it's not the military's responsibility to be accommodating.

“Only you decide what makes you happy and if having a transgender change is what does that, fine,” said Dustin Logan, an ASU communication senior and 8-year veteran. “But the problem is that the military does not adapt to you, you adapt to it.”

Logan said that during deployments throughout his career, it was sometimes difficult for soldiers to have access to medicine. He expressed concern that transgender military members may not be able to take the prescribed hormone treatments during a deployment, which he said could cause a “psychological imbalance.” 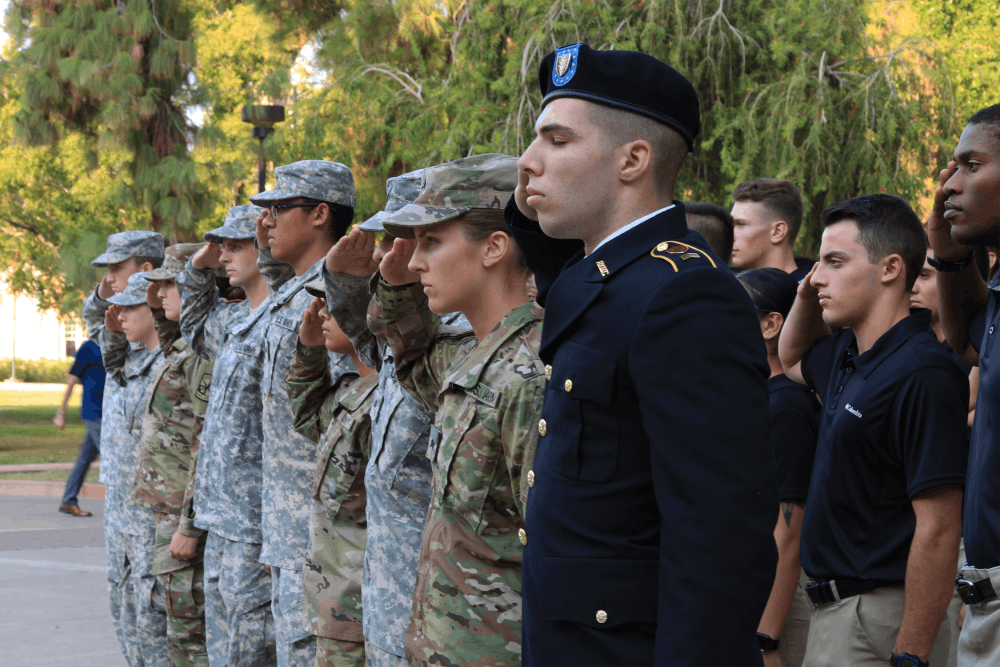 ASU ROTC recruits stand at attention at the flag raising ceremony on the Tempe campus on Tuesday, Sept. 5, 2017.

“If you wanna serve your country, I don’t believe that anyone should not be afforded that option,” Logan said. “You’re more than welcome to make that choice to have a transgender surgery but it may make it so that you’re not allowed into the military.”

Stephanie Anne Donoghue, a transgender Air Force veteran and Arizona native, rejects the idea that it’s a burden to have transgender people in the military. Rather, she said being transgender contributed to her success.

“I attributed that to being able to look at it from the male aspect and the female aspect and put them together,” Donoghue said. “From a national security standpoint, we’re risking getting rid of a lot of good ideas.”

Donoghue doesn’t believe Trump’s motives for enacting the ban are “tremendous medical costs” or “disruption.” After all, she said, the Pentagon spends five times more on Viagra than it would on care for transgender military members.

....victory and cannot be burdened with the tremendous medical costs and disruption that transgender in the military would entail. Thank you

“He’s surrounded by people that are religious extremists,” she said. “He’s trying to keep those people happy. But even more so, I think it’s a distraction from other issues. He’s distracting from ... how involved he was with the Russians.”

Regardless of his support for the ban itself, Logan said he found the way the president announced it to be “totally unacceptable.”

“It’s a huge topic,” Logan said. "It’s such a big topic that really hits people. That was the wrong way to go about it.”

Currently, the ban is under review by U.S. Defense Secretary James Mattis.

“I will establish a panel of experts serving within the Department of Defense and Homeland Security to provide advice and recommendations on the implementation of the president’s direction,” Mattis said in a statement.

In the meantime, military officials are left without official guidance on how to move forward.

Dallas Eubanks, the U.S. Army Recruiting Operations Officer at ASU, said that for now, nothing is changing.

“We just continue on with the current status which is, it doesn’t matter if someone came out as transgender, we’re not gonna process them out until we get further guidance," Eubanks said.