Stories are a cherished aspect of any culture. They can be shared in any medium. They can be used to educate as well as to entertain. They are an extension of ourselves and our beliefs.

That is the philosophy of Phillip Murrell, 36, a second-year MBA student in the W.P. Carey School of Business. While on active duty in Iraq in 2010, he began writing screenplays, which led to writing fiction. He recently published his first book of a four-part series entitled "Bystanders."

“I’ve always been a big fan of stories, regardless of medium,” Murrell said Wednesday. “I always liked writing stories as a kid, but I didn’t think to share it until 2012.” 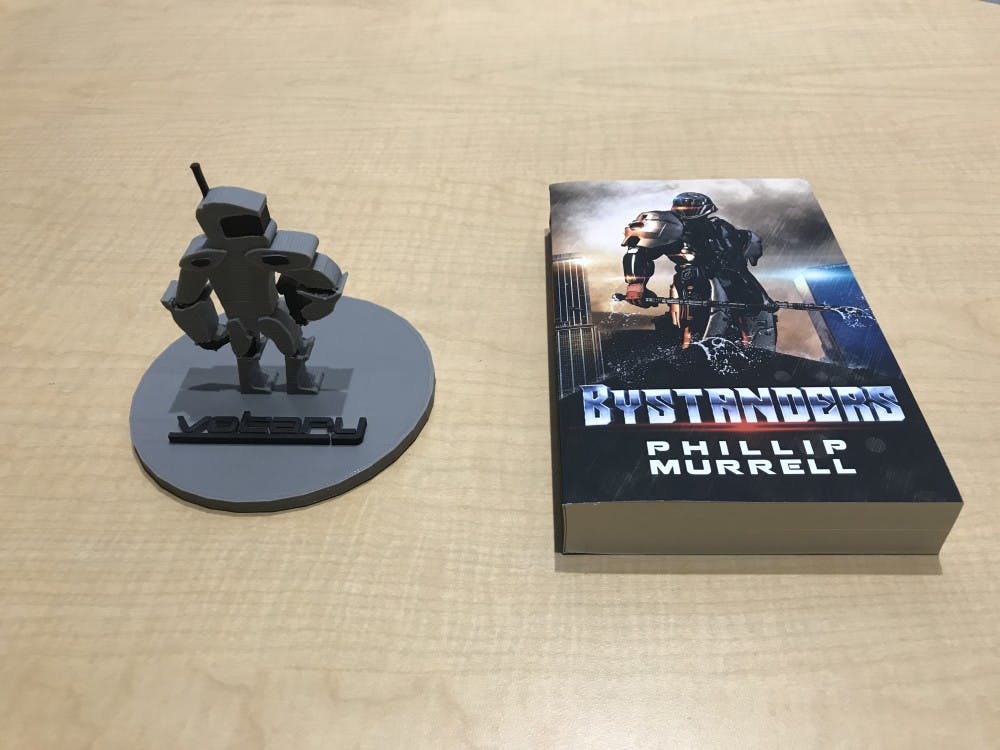 The front cover of the book, accompanied by a 3D-printed figurine of the protagonist.

"The city of Colberton has a vigilante named Votary," the back cover of the book reads. The cast of characters includes a reporter, police officers, paramedics, criminal bosses and teenage fans who witness the acts of Votary and ponder the identity of this mysterious hero.

The twist to this story is that the reader will not know the identity of Votary and will learn more as the characters do.

Murrell credits this decision as his method of addressing cliches and going against them. This is his technique for engaging the reader.

“You have to take some cliches and flip other ones,” Murrell said. “It’s a cliched story.”

Keeping both the characters and the readers in the dark about the identity of the superhero was an intentional narrative choice as well, he said.

“The whole character will be a mystery,” Murrell said. “Most people will determine the identity of Votary by the end of the fourth book.”

The time from concept to publication took two years, he said.

Since "Bystanders" was self-published, Murrell sought the aid of an independent editor for this process. He found Michael Garrett, who is renowned for being Stephen King's first editor. The cover of the book was designed by a freelancer from 99designs.

“They both did great jobs for me,” Murrell said.

After graduating from the University of Nevada, Las Vegas in 2001, Murrell joined the Army in May 2002. In all, he has been stationed in five different countries, including South Korea, Iraq, and Afghanistan, and 14 different states. He cites his father's own experiences as an incentive for enlisting, and described himself as "a fan of adrenaline."

While stationed at Fort Campbell in Kentucky, one of his roles involved training the 101st Airborne Division staff on proper counter-improvised explosive device techniques.

"They paid me to blow things up," Murrell remarked of his military time.

But after spending 15 years in the military, Murrell decided to further his education.

“I wanted something in a logistics program,” Murrell said. “W.P. Carey was consistently at the top of the results.”

After enrolling in the School of Business, Murrell shared his love for stories with faculty and peers. His work on "Bystanders" caught their attention as well.

"He spoke with passion about the book he had written and how much he enjoyed working on it," said Sandy Somers, assistant director of career services in W.P. Carey, in an email interview Sunday. Somers had previously worked with Murrell as a career coach.

"It sounded intriguing so I was eager to get a copy. I started the first few pages and it was hard to put down!" Somers wrote in an email.

Those who have worked with Murrell in the past admire the drive he has shown in his craft.

"I've been consistently impressed by his dedication to his work and the drive to share it with the world," said Jimmy Haight, one of Murrell's MBA classmates. "I saw how he poured himself into his stories and I loved understanding the emotion and reasoning behind his character arcs."

“Write what you know,” Murrell suggested to aspiring writers. “If you don’t know, you’ll assume things. You’ll put in a lot of mistakes because that’s what you’ve heard.”

To that end, Murrel stated that he is actually looking forward to his first negative review.

The first volume of Bystanders is available on Amazon now, with the second volume slated for a December 2017 release.