The Center for the Study of Race and Democracy partnered with Barrett, the Honors College Wednesday night to bring students and community activists together in downtown Phoenix.

The goal of the event was to encourage people to “use whatever talent they have for (activism),” said Shamell Bell, the guest speaker at the event.

Bell is a Ph.D. student at the University of California, Los Angeles who was invited by longtime friend Mathew Sandoval, a Barrett faculty fellow, to share her talent for street dancing to raise awareness for the Black Lives Matter movement.

“It was important for me to bring (Bell) out so that we can change the way we think about being engaged in a social movement,” Sandoval said. “Not everyone has the capacity or willingness to go out into the streets and march ... but there are so many other ways to get involved, art being an incredibly positive way.” 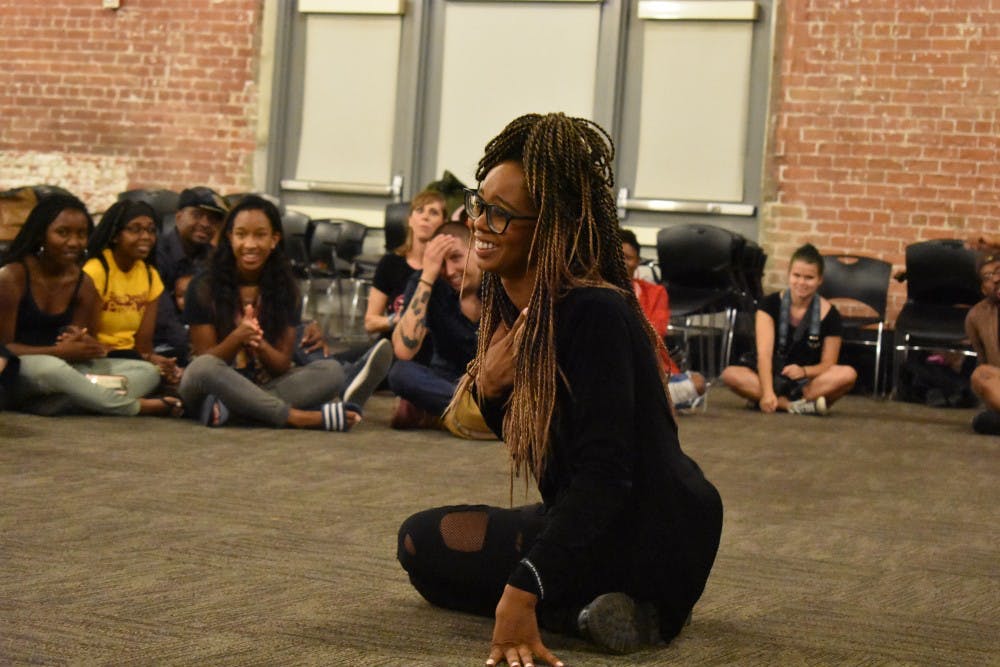 Bell wasn’t only there to lecture on how she has decided to advocate for Black Lives Matter – after the lecture had concluded the chairs were set aside, Anderson .Paak blared through the sound system and the lecture hall quickly became a dance hall.

Bell said she thinks it's important to teach people how to dance and perform because "street dance is the voice of the youth."

"I think it’s important for us to get their voices so that (their voices) raise consciousness," Bell said. “Using street dance as a way to connect with each other through social dance, I think that’s what important for the Black Lives Matter movement.”

“We are here to love … even though we have so much negativity going on," she said. "I’m encouraging people to look within themselves to heal (themselves) in order to help heal other people."

The overall message was “to be true to who you are, and connect in a way that is true to yourself," said Sarra Tekola, a doctoral student at the School of Sustainability.

Tekola said that this event was important to her as a community organizer because it helps encourage students who feel oppressed to speak out.

“There’s a lot of apathy, and because of all these things that are put on (students), people don’t want to speak out," Tekola said.

She said the event showed students that "we can speak out, we need to stand up, and we can’t be silent anymore."

Community organizer leads a workshop on street dance activism from The State Press on Vimeo.

Another attendee at Wednesday’s lecture, Erika Moore, an ASU alumna and coordinator of Projecting All Voices, said she came out with a similar feeling of renewed purpose.

“It reminded me of my position and how every day I wake up, I should be doing something for the movement with the talents that God has given me," Moore said.

“I would say this is a message of hope … that exists not only in the Black Lives Matter movement but in movements, generally, that exist to find equality and equitable relationships.”

Wednesday night’s event illuminated to some that there is an intersection between artistic creativity and political activism. To Sandoval, that’s just the beginning.

“The goal of tonight: to get people walking out of here thinking ‘oh man what can I be doing …  what do I have to lend?’" Sandoval said. "That’s how Shamell [Bell] started."