There are over a dozen pieces of public art that students walk by every day at ASU, but some may not realize the history or significance behind each work.

Public art can be of any size and made of any medium, but what makes it unique is its prominence in public spaces. Traditionally, when someone wants to see art they go to a gallery or museum exhibition, but public art is unavoidable and exists in spaces where it is not the main focus. 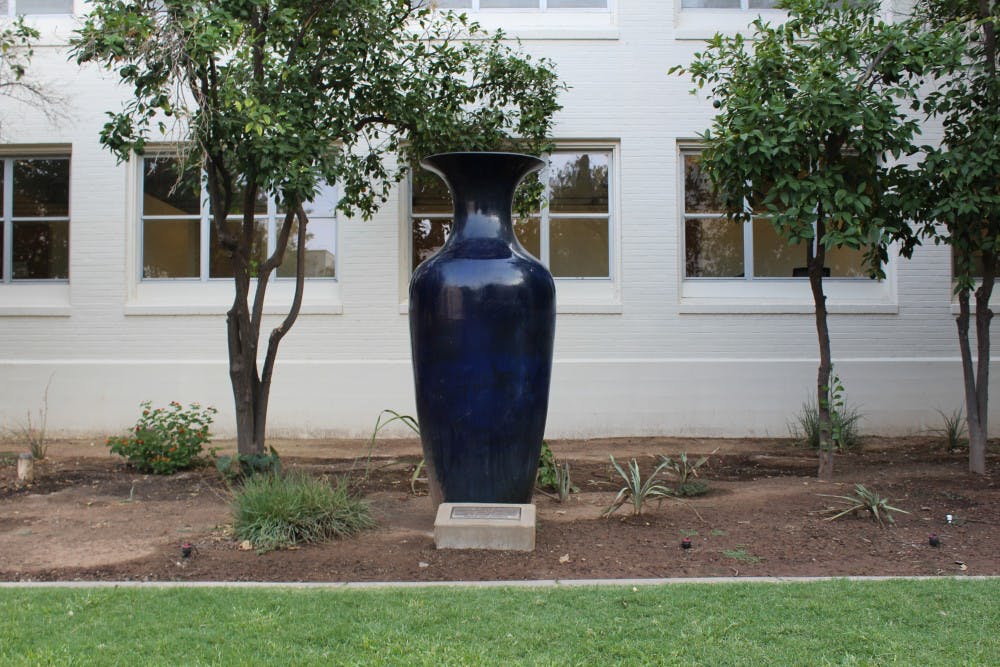 Anyone who has been in the “Secret Garden” courtyard, between Dixie Gammage and West Halls, has probably seen “Blue Vase.” This aptly named unattributed vessel dates back to the 1893 Chicago World’s Fair and has been in the garden for over 60 years.

Sam Fresquez, a junior majoring in intermedia art, said public art is important because it allows artist to have conversations with society, especially to communicate with people outside of the art community.

“(The art community) can be an echo chamber of the same ideology and same beliefs over and over again, and then there’s no point in doing it," Fresquez said.

Fresquez also said she thinks the ability to have conversations through art is especially important on college campuses and that she wishes there was more student art on the ASU campus. 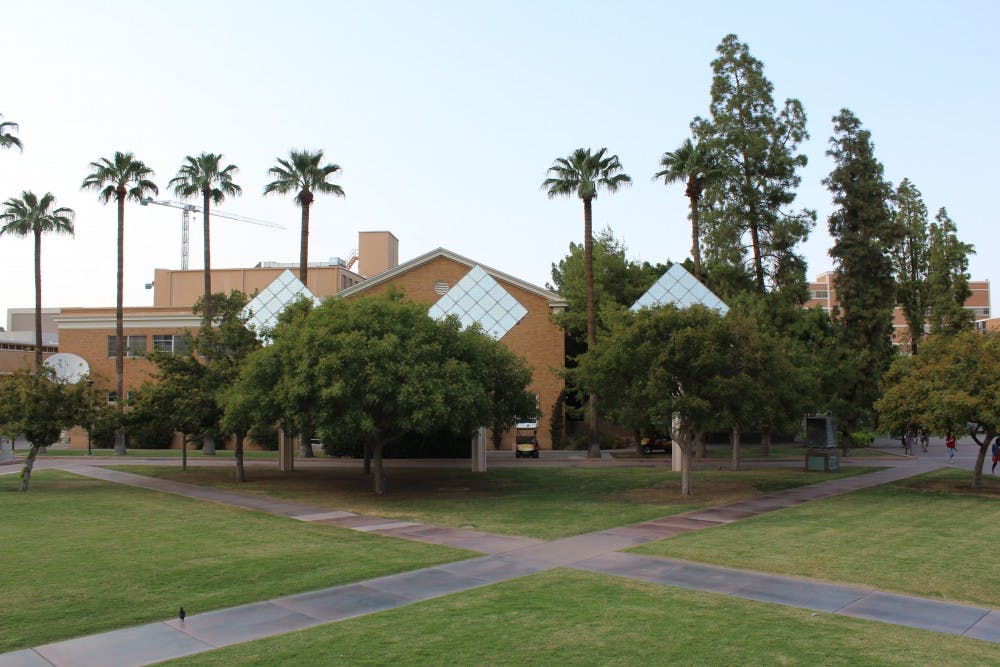 “Time Garden,” on the lawn of the Hayden Library, is a piece by sculptor Dale Eldred that was installed at ASU in 1990. The piece is composed of three 22-foot towers with panels atop each that reflect the sunlight differently throughout the day.

Eldred has said of the piece, “The Earth turns, time passes, light manifests itself in ways we have not understood, and this high-tech sundial brings the poetry of light and time and color closer to the viewer's experience," according to ASU's website.

Three pieces on campus, “Industrial Development in Arizona and Spanish Influence in Arizona” by Joseph Henninger and “Hopi Flute Player” and “Fountain in Cast Stone” by Emry Kopta, were commissioned as part of the Federal Government’s Public Works of Art Project (PWAP). 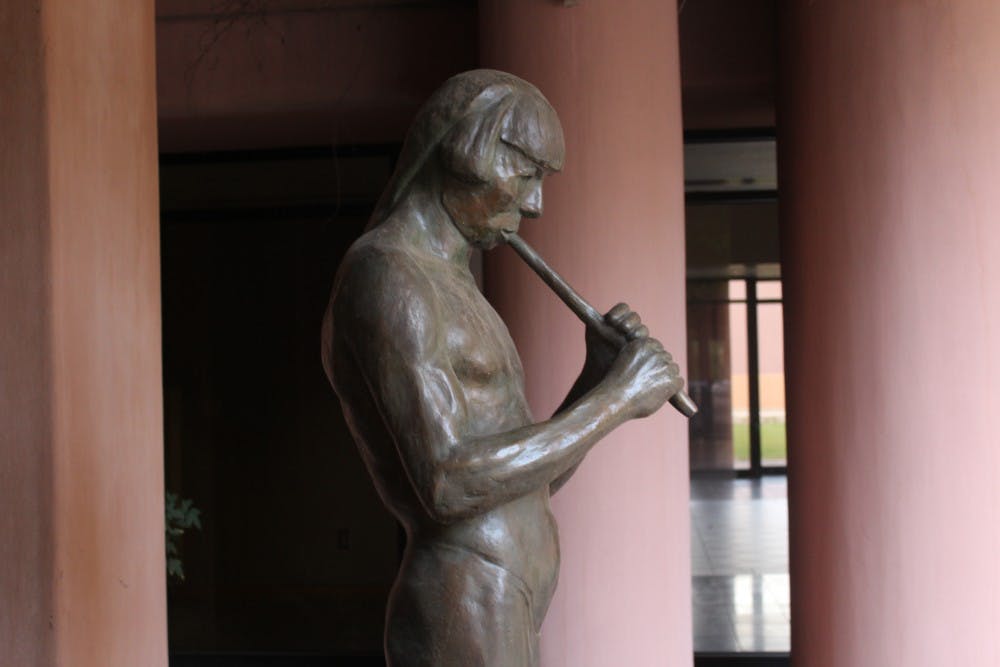 Art piece "Hopi Flute Player" by Emry Kopta is pictured in the courtyard of the Music Building on ASU's Tempe campus on Thursday, Sept. 7, 2017.

The PWAP was organized in the 1930s as part of Franklin D. Roosevelt’s New Deal, to promote art and the employment of artists during the Great Depression.

“Public spaces in general are greatly enhanced by art,” said Rebecca Rothman, ASU alumna and director of public art for the city of Tempe. “People will remember ‘oh that’s where that is,’ or ‘I love being in that space because it’s different.’”

Rothman said there is more than an aesthetic value to public art because it can also enhance a space through creative placemaking, strategically shaping the character of an area through art.

She said public art on college campuses can challenge students to think differently and question their daily environment.

“College campuses are a space where inquiry, curiosity and research are the mission, so art can create a conversation that touches on all of those things," Rothman said.

ASU's interactive map lists 16 public art pieces on campus, calling them “points of pride,” but there are some pieces that are not listed.

One of the newest pieces on campus that is not on ASU’s map is James Turrell’s Skyspace: Air Apparent. Located on the east side of campus near Rural Road, Skyspace was installed in 2012 and has a large opening in the ceiling, showcasing the sky.

Chris Janes, a freshman majoring in business finance, said that although he’d assumed the public art pieces on campus have a history, he’d never really thought about them as more than just visual art.

“I mean, I think it’s definitely more applicable to other people than to some,” said Janes, “but I think that everyone can appreciate it.”

Besides ASU, there are dozens of public art pieces around the city of Tempe. Check out interactive maps of Tempe’s public art here. 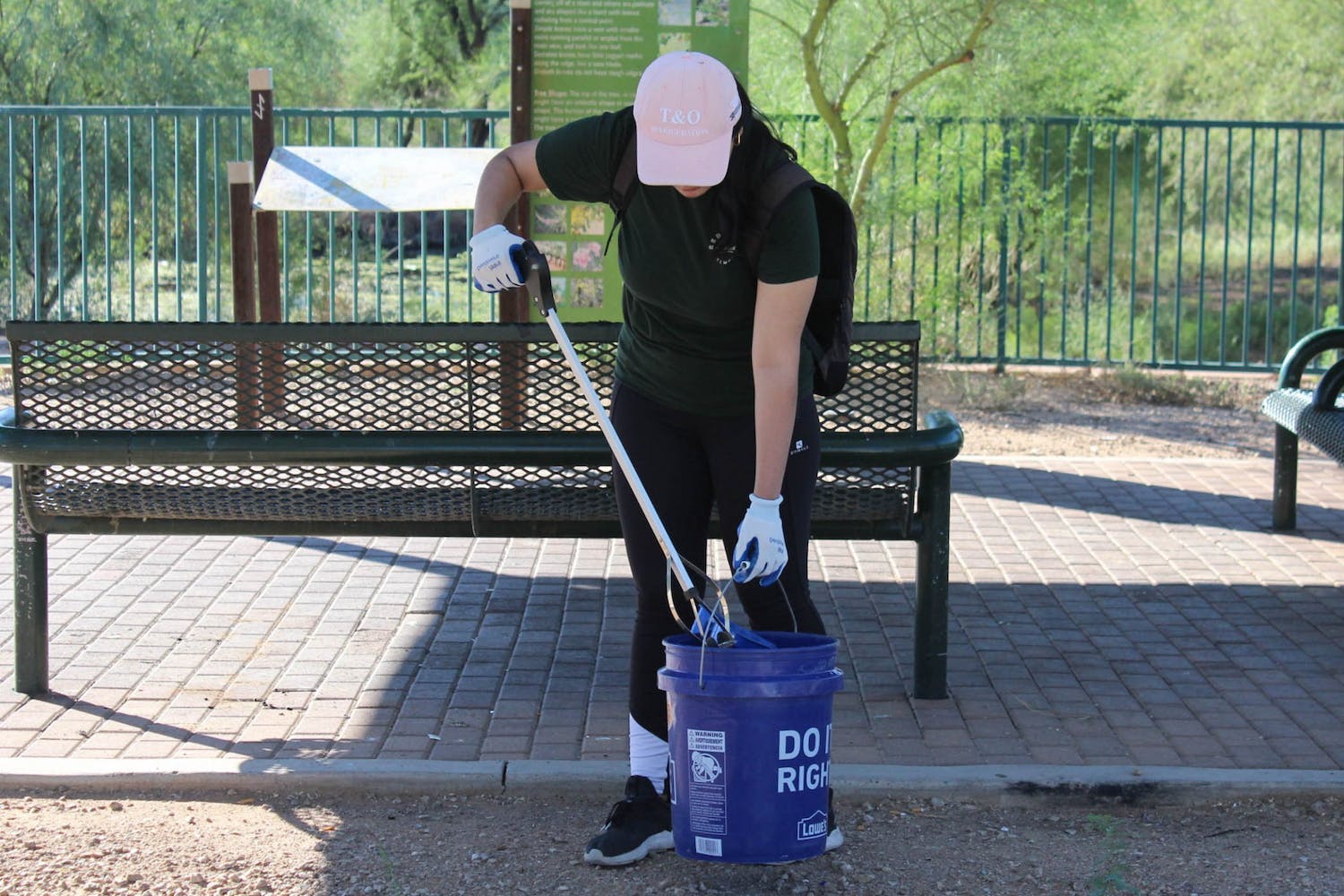 Keep Tempe Beautiful is cleaning up the city with the help of ASU students, volunteers