Look across any ASU campus and you will see posters promoting travel abroad programs. Now, ASU students in these programs have found creative outlets to reflect on their experiences abroad.

This idea fuels the “Dine in or Take Away” exhibition at the Grant Street Studios’ ASU Step Gallery, just a short distance from the downtown Phoenix campus.

The exhibit, which ran through Sept. 16, highlights the work of ASU undergraduate and graduate students in the Herberger Institute for the Design and the Arts who traveled abroad to Germany, Italy and Greece to visit major art festivals this past summer. It also examines what it means to be a tourist on the move, responding to and consuming the world around them.

Meredith Drum, an assistant professor at Herberger, said they had this exhibit in mind before their travels began.

“From the early stages of planning our study abroad trip to the Venice Biennale and Documenta 14, Erika Hanson (another Herberger professor), and I wanted to produce a show of the students' work upon our return to ASU,” she said in an email interview.

Drum said she was uncertain if the art school had held such an exhibit before, but she said it serves as a reflection of the students' experiences abroad.

“For our students, who are all studio artists, the exhibition of new work made after the trip offers a method of processing their experiences in harmony with their studio practices," she said.

In the Warehouse District gallery where the students' work is displayed, there are several pieces, including videos, paintings and performative objects, according to the ASU events page for the exhibition.

“The range of mediums employed by these artists is wide,” Drum said. “Many of them are continuing to work with familiar tools, yet they pushed themselves to use them in new ways.”

A video exhibit by Enrique Borges, a senior art major, recorded the sounds of numerous settings while giving a glimpse of the sky. Borges said each camera was pointed skyward to take in the heights, intended to make a person consider their place within the cosmos.

“There is an element of smallness that I believe is necessary to ground us as people into our place within the cosmos,” Borges said. “As I consider my place on this earth and in the greater universe daily, I look to my natural environment to give me a sense of comfort and belonging.”

Above the smartphones and tablets displaying his videos hang a collage of items Borges collected on his travels. Bags, receipts, tickets, tags, passes and more are strung together on bright blue yarn as a way of realizing that “Everything is Connected," as his piece is called. 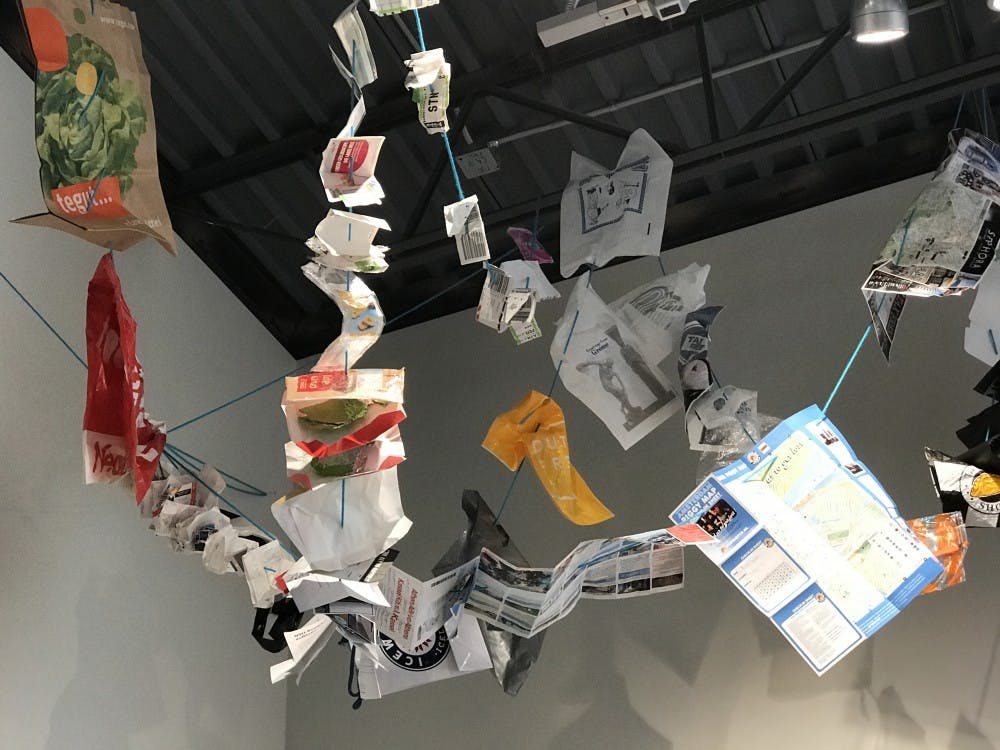 Brandi Cooper, a graduate student in ceramics, constructed a number of shelves with multi-colored paper clay sculptures atop them.

Cooper said the sculptures are meant to celebrate the capacity of nature to reoccupy its own space by invoking images of wild plums bursting from the ancient walls and arches of Palatine Hill in Rome.

“No matter where I find myself in the world, I am continually amazed at the resilience and fecundity of nature,” Cooper wrote in a personal statement. “I witnessed a biotic revolution occurring.”

Lena Klett, a second-year graduate student studying fibers, examined the term “place" in her two pieces at the Step Gallery.

Klett said both external and internal factors come together so that a person projects themselves onto their surroundings and shapes their experience of being in that space.

Her first piece is a triptych entitled “Scores: How to Build a Home," which she said offers three suggestions for constructing this space in unorthodox manners.

Her second piece is a porcelain sculpture entitled “How do You Say…..?" which Klett said reflects the struggle of communicating in a different language she faced while abroad. 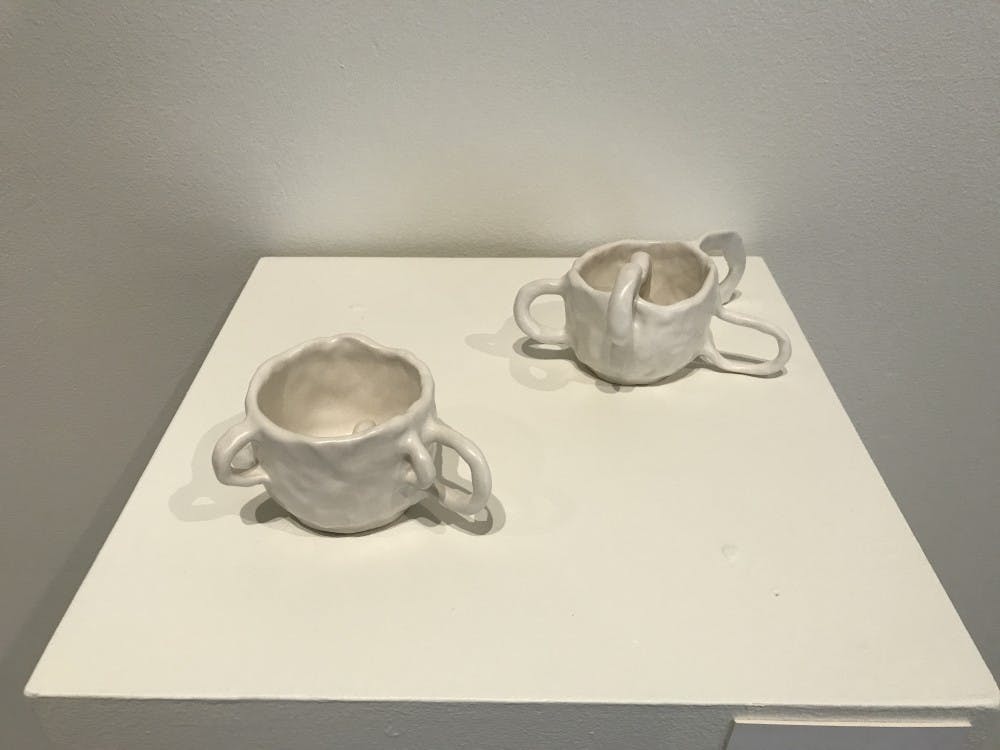 “Over the course of the Mobile Studio program, I became increasingly troubled by my own inability to fully communicate with the people in the places we visited in terms of language, culture, and worldview," she said.

The idea of the body being a vehicle to understand the connection between a person and the space they inhabit played a prominent role in Klett’s pieces, she said.

“What is the connection between debris, earth and sky?” Borges said. “What is our place within the cosmos?"