His gallery, 'To Live Without Borders,' uses art to highlight the border's impacts

In downtown Phoenix, college students and art admirers could escape a crowded night at October's First Friday at an exhibit curated by an ASU graduate student at the Modified Arts gallery.

The show consisted of work by printmakers, photographers and sculptors that create work representative of the effects of the border within southwestern communities.

Caruso said his work is specifically focused on the border fence and its history, and how he wishes to “take down the barriers” that divide people.

“Most of my time during my undergraduate degree I was afraid to talk about issues that I was really consumed about, being a white male," he said. "So I played in lanes of things that were of less interest to me although I was still doing a lot of activism in my interests outside of the arts.”

Now, Caruso said he has succeeded in overcoming that fear and helps to bring others to the spotlight. The gallery had been created in collaboration with artists who did research along the border, including intermedia art junior Sam Fresquez.

“I appreciate the lineage of art… and it’s not like I’m doing a charitable thing," Caruso said. "Sam’s work is very strong and a lot of her research deals with language barriers.”

Fresquez said she appreciates that Modified is a popular gallery visited by people from all walks of life.

"This is where I grew up, walking through and I went to school down the street," Fresquez said. "It’s very childhood reminiscent, and that's nice.”

She said she feels her work highlights the intersections and crossroads within the spaces created in this border state. She also hopes to affect viewers by showing them the relationships and connections among all communities.

Taylor James, an ASU alum with a masters degree in photography, also contributed to the exhibition. 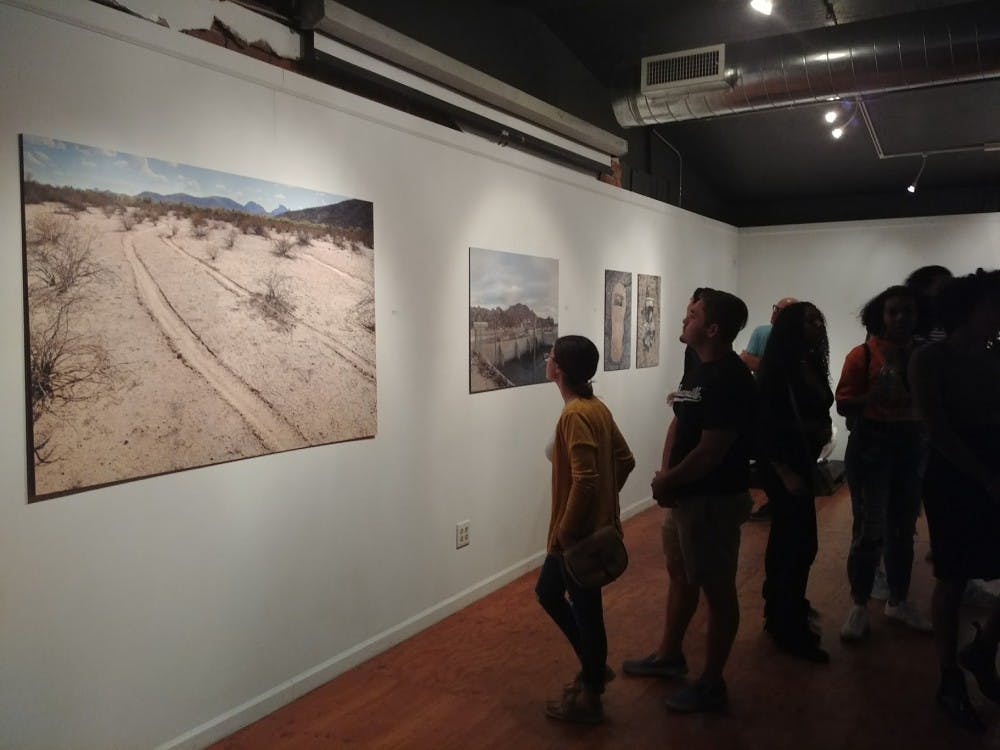 Some of his art stemmed from working alongside Samaritans in Ajo, Arizona. His body of work includes photographing locations where migrants have died or have been rescued in the desert.

“No one should die in the desert, there’s no reason for that to happen," he said. "That’s really where it started and just trying to ... make sense out of it.”

James moved to the Southwest from the East Coast and educated himself in the “reality of what's happening," he said.

“The perspective of the border is so skewed from what the reality of it is, especially that far removed from the border," James said. "So to come and undo my perspective a little bit or educate myself, and then hopefully take that same education and show someone else on the East Coast who has no idea of what's really going on.”