ASU teams up with NASA to depict Psyche asteroid

A group of ASU students are developing creative projects for NASA

NASA has partnered with the ASU School of Earth and Space Exploration to map Psyche, a mysterious asteroid made of a nickel-iron core similar to the Earth’s. Scientists have already determined the asteroid’s shape and size, but not what it looks like.

Psyche is set to become the first asteroid made of metal that humans have ever explored.

Conveying the excitement of the mission and interpreting the asteroid’s potential appearance has been left in the hands of a group of 13 ASU undergraduate students from different majors working to express the Psyche mission through an artistic lens.

Catherine Bowman, an associate research professor in the School of Earth and Space Exploration, leads the development and coordination of student collaboration opportunities for the Psyche mission. She worked with a board of reviewers to evaluate the 46 applicants for the internship program, and tallied their scores to select the top 13 undergraduate students to join the Psyche Inspired program.

Bowman said each student comes from a different major, including astrobiology, digital culture, engineering and art.

The goal is to interpret Psyche's appearance creatively in a way that is scientifically plausible, said Brooke Owen, a senior biology major and the Psyche Inspired project manager, said.

"A lot of what our interns are taxed with is being creative and using your imagination,” Owen said.

Joining the Psyche Inspired team is also about fulfilling principle investigator and SESE director Linda Elkins-Tanton's mission — “to inspire people to be bolder in their own lives,” Bowman said.

“(Elkins-Tanton's) idea was to bring creative people together, to use their creative talents to explain the mission, to express the excitement and creativity that’s inherent in something like an exploration mission to the public in a way they’ve never thought about before, and bring the mission to new audiences through creative works,” Bowman said.

Isaac Wisdom, a freshman studying music and culture, said that, due to the silence of space, crafting music has posed a challenge.

“I feel like my job is a little bit harder than some of the other interns because the visual medium is a lot easier,” Wisdom said.

His idea to write separate pieces to symbolize the process of the Psyche mission was inspired by other composers’ interpretations of outer space, such as Gustav Holst’s "The Planets."

“If I follow the mission throughout its conception to the eventual end, each movement would have a different feeling,” Wisdom said. “For the idea generation, I see that as sort of hectic — a little messy, but somewhat structured.”

Despite his nerves, Wisdom is ready to take on the project.

“I’ve always loved space and space flight," Wisdom said. "I used to think I want to be an astronaut, but then I realized being an astronaut is really hard. So I’ll stick to what I’m good at. I’m excited to be a part of it in this way."

Caralie Cedarleaf, a senior sculpture major, is just as excited.

“I took my first astronomy class this semester, so I was really jazzed about it," Cedarleaf said. "I was getting really excited about making art based on what I was reading in my astronomy textbook."

Cedarleaf has a personal background in astronomy, as well.

“My great grandpa worked on the Voyager Mission,” she said. "I just felt like it was a cool opportunity for me to get involved in something that my family has a tie to.”

Owen reviews every proposal, and each intern is expected to produce one project per month, highlighted on Psyche’s social media pages. 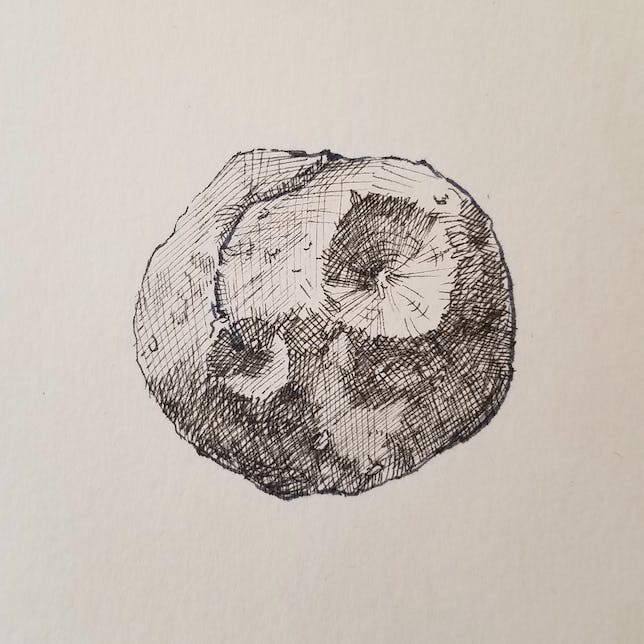 A rough sketch of the Psyche asteroid drawn by Sofia Garcia, freshman painting major, on October 1, 2017.

“Our goal is to really highlight one student at a time so that people can really focus on their work and learn a little bit about them,” Bowman said.

All the projects will be showcased in a public art show at the end of the year, which will be livestreamed online. The projects will also be displayed each month in Interdisciplinary Science and Technology Building 4 on the ASU Tempe campus.

“What we’re trying to do is use art to evoke public interest and make people realize it’s not scary. It’s fun,” Owen said.