Women interested in skateboarding on the Tempe campus can now connect with their peers through the Women’s Skate Club, a new organization aimed at creating a community among female skaters.

Ruth Mora, president of Women’s Skate Club and a freshman in film production, said in the first meeting of the club on Nov. 15 that they want to create a community of women that can call on each other for support — or just to ride. 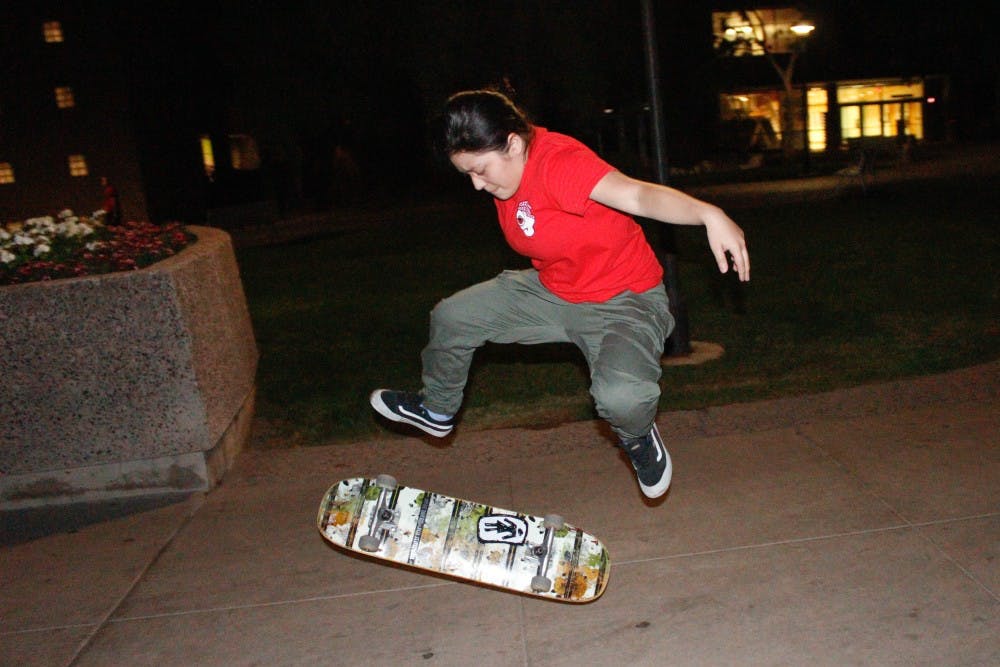 “We want to encourage women in the field of skateboarding, longboard and cruising,” Mora said during the meeting. “We’re here to learn and have fun.”

Mora said that for now the club will probably practice around campus, using parking lots and secluded areas, but next semester the club plans to expand and bring in more local female skaters

“There’s actually a lot of local AZ girls who are really good, and I feel like they would be willing to teach us,” Mora said to the group.

All women with an interest in skateboarding, longboarding and cruising are welcome to join the club, according to the Women’s Skate Club page on SunDevilSync. The club will have extra boards available to borrow for women who might not have their own.

Mora said the next meeting won’t be until the spring semester, but all members are encouraged to register for the club in SunDevilSync as well as follow the Facebook, Instagram and Twitter to keep up with club news.

After the meeting, Gabriele Frias, a senior in filmmaking practices who handles media relations for the club, said they hadn’t expected a huge turnout at the first meeting so it was exciting to see several women show up.

“We had more people that couldn’t show up, but I think we’ll have a pretty decent sized group of women,” Frias said.

Frias said the idea behind building the community is so women have people they can meet up with at anytime to go skate.

“The club is a place for the women on campus to find a group that they fit into, like longboarding,” Frias said. “I’m excited for next year when we can get into it more and get more and more women.”

Suzy Williams, a freshman in biological sciences, said that her interest in longboarding and improving her skills led her to the meeting after finding the Women’s Skate Club on SunDevilSync.

“I was just looking through all of the clubs at ASU because I knew I wanted to get involved in something, but I wasn’t sure what,” Williams said.

Williams said she had a lot of fun at the meeting, and that getting involved with the club while it is still growing gives her the chance to get to know everyone better.