Growth around the ASU Tempe campus is likely to continue after the Tempe City Council’s approval of a $21 million dollar tax rebate for a luxury hotel company to build a hotel and conference center on university property last week.

The newest plans to add a hotel and conference center reflect a growing trend of luxury developments around ASU that will change the way ASU students live, work and pass time in the area surrounding campus.

The council voted 6-1 to approve the resolution in a special meeting on Jan. 11. Opponents of the resolution mostly included residents who said the deal was unnecessary, but its supporters made a business case for the development and its opportunities for tourism and growth.

Rep. Athena Salman (D-Tempe), who testified at last week's council meeting, described the agreement between Tempe, Omni and ASU as “another tax giveaway to a corporation that could afford to build otherwise” in an interview after the vote.

Salman said ASU could better use the land to develop research facilities, such as the new Biodesign Institute building under construction on the east side of campus, or as a site for student residences.

Under the resolution, ASU will lease 2.25 acres on the southeast corner of University Drive and Mill Avenue to Omni Tempe, LLC, which will develop a 330-room hotel and 30,000-square-foot conference center.

Picture yourself here. Rates starting at $109 but hurry these prices will only last until April 6th! https://t.co/WaqXB23PmB pic.twitter.com/cgo2PTpg0l

The city expects the revenue from the project to exceed the value of the tax incentives, according to the resolution. The agreement caps the tax breaks Omni will receive at $21 million.

Omni is a luxury hotel group with facilities in domestic and international cities including locations in Scottsdale and Tucson, according to its website.

Beyond the recent deal, construction began at the intersection of University Drive and Forest Avenue in early 2017 on a mixed-use development operated by the Opus Group, a Minneapolis-based commercial real estate development company that specializes in luxury apartments. 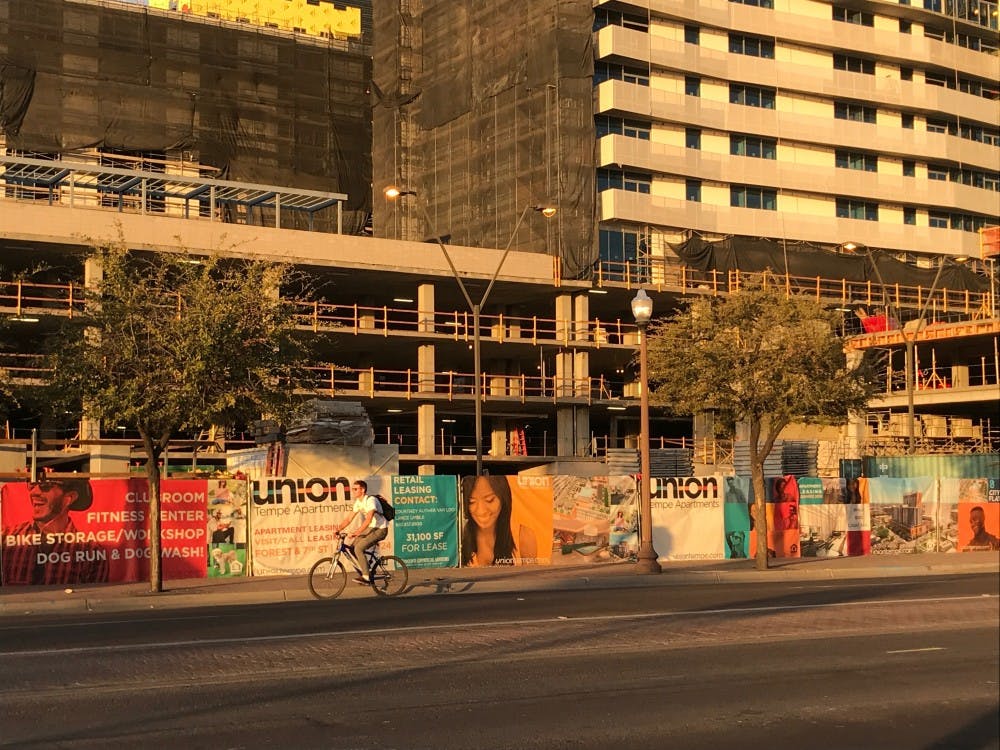 Students in the market for luxury residences now have several options, including Sterling 920 Terrace, which describes itself as “the ultimate luxury student housing” and West 6th Tempe, where rents range from $1,309 to $8,249.

In February of 2017, The New York Times cited Rise on Apache, a development near the ASU Tempe campus, in an article on rising expectations for amenities in student housing.

The growth of luxury developments makes it more challenging for students looking to find affordable housing options around campus. According to RENTCafé, an online apartment listing service, the average monthly rent for an apartment in Tempe is $1,097. That number has increased steadily since January 2015, when the average was $919, representing an almost 20 percent climb.

The Omni development also raises concerns for on-campus student housing and parking. The lot is currently an ASU parking lot, and the loss of parking spaces will affect parking on and near campus, where space is already limited and many yearly parking permits cost students more than $700.

The Arizona Republic reported that ASU is seeking to enroll 125,000 students by 2025, 90,000 of whom would be on-campus students. This growth will increase demand for on or near-campus residences.

ASU did not respond to requests for an interview at the time of publishing.

During the Jan. 11 meeting on the resolution, councilmembers also highlighted that if the property was not developed by Omni, there is a good chance it would be developed into on-campus residences, which would not generate any revenue for the city.

Members in support of the Omni resolution pointed to the project's projected boost to tourism, as well as the fact that the company will be required to contribute $400,000 per year to promote tourism in Tempe.

“We don’t have a ballroom in Tempe that can hold a conference with more than 1,000 people,” Mayor Mark Mitchell said at the meeting. “This is a game-changer for the tourism industry.”

Brian McCartin, president and CEO of the Tempe Tourism Office, said at the meeting that the tourism industry sustains one in 13 jobs in Tempe and that the conference center would allow local organizations such as ASU to host large events in the city.

However, several Tempe residents spoke in opposition to the resolution, saying that businesses should come to Tempe to truly invest in the community rather than in search of tax breaks.

Councilman Kolby Granville was the only councilmember to oppose the resolution.

“It’s understandable why ASU doesn’t pay property taxes,” Granville wrote in a statement released on his Facebook page the day before the vote. “However, we did not, as a society, decide that a hotel should be off the hook. And yet, that’s what’s happening here.”

The hotel is set to open in 2020, according to a city press release.