Intramural sports no longer give women more points for scoring, but that changes in the regional and national championships

Scoring is the same from the little league level all the way up to the professional level. Recreational soccer awards one point for a goal, and the same goes for MLS. Similar scoring schemas can be found for basketball, baseball and most other sports, but co-recreational leagues are different.

Even at ASU, until this academic year, intramural competitions featured gender-specific scoring. However, after a two-year process, the rules have been eliminated for the purpose of equality.

Nevertheless, gender-specific scoring is still at play in some regional and national tournaments.

Formerly, in co-rec intramural leagues throughout ASU, a woman was awarded nine points if she scored a touchdown – three points more than the regular six allotted to men. A single goal in soccer was scored as two points, instead of the traditional one point, and any made shot in basketball by a woman was counted as typical scoring plus an extra point.

“I thought that was completely ridiculous because that’s a huge difference, especially in a sport like soccer,” intramural student coordinator Alyanna Harina said.

Harina, a student coordinator for the last two years and a journalism junior at ASU, participates in intramural leagues and said it was odd that a woman’s goal was worth double the standard amount.

“There’s nothing really that makes it special, other than the fact that we’re girls playing,” Harina said. “And even that I don’t think should be considered as something different.”

If a co-rec team had a woman who scored two goals, then a man needed four goals just to tie. In football, two touchdowns scored by a woman meant a male needed three touchdowns to knot it up.

A change toward equality

The difference in scoring appeared odd to some women and made them feel less equal, but Harina said it was mainly the men who verbalized a discomfort with the rules.

“It was definitely some student feedback with both intramurals and ASU as a whole,” said Nick Deponte, senior program coordinator at the Downtown Phoenix campus. “Just with kind of the campus climate as far as gender equality being such a huge emphasis everywhere in our nation right now, and especially in college … we want to be leaders in that.”

In an effort to support gender equality, ASU has several leagues that students can choose to participate in: men’s, women’s, co-rec and open.

While men’s and women’s leagues are specific to those genders, co-rec allows students of both genders to play on a team with certain caveats (required number of each gender on a roster). Whereas for an open league, students are not required to identify their gender.

“We don’t tell a student what gender to identify as,” Deponte said. “They would identify as that (gender) when they create their account on IM leagues, and we have training with our staff members of whatever they identified with on IM leagues – that’s what gender they are. So we don’t question that at all.”

As the leagues progress through the regular season and onto the playoffs, teams are eventually sent to participate in regional and national championships. 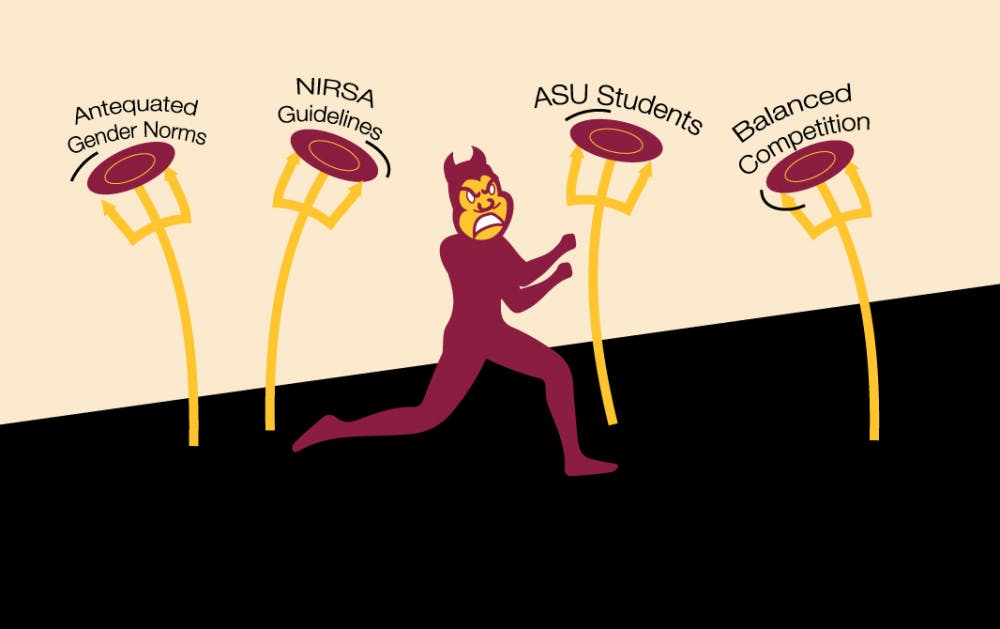 The National Intramural-Recreational Sports Association, now called NIRSA: Leaders in Collegiate Recreation, is the organization that typically puts on the regional and national championships.

Although each university can set its own rules, NIRSA has established a rulebook for flag football, but not for basketball or soccer. The NIRSA Tennis Championship Series is played by World TeamTennis rules.

In flag football, a woman's touchdown is still worth nine points instead of six, meaning that playing in NIRSA's Football Championships requires teams to compete with gender-specific scoring.

NIRSA senior director of professional development, Mary Callender, said the scoring rule was   implemented to encourage participation and had nothing to do with a woman's athletic abilities.

“When the co-ed rules were originally developed, it was to encourage equal play or play among the students,” Callender said. “There was tendencies in co-ed rules or co-ed play for men to not be inclusive of the women on the team, so this was a way to encourage participation for the women, not be exclusive."

Valerie McCutchan, NIRSA director of national sport programs, deals heavily with the National Championship series. In fact, the NIRSA website lists her as the individual to contact if someone has questions regarding the championship series.

McCutchan declined to comment on the flag football rule book.

However, she said NIRSA’s Tennis Championship Series is a strong example of inclusivity.

Similar to ASU, NIRSA allows athletes to play as whatever gender they identify as. Nevertheless, the soccer championship, for example, doesn’t provide a co-ed division. There are men’s, women’s, men’s open and women’s open.

The gender-specific open leagues are reserved for individuals who identify with the specific gender, but that doesn’t mean men and women play together on the same team.

NIRSA’s rules are updated every two years, and “all rules are under consideration” with the newest edition of the rulebook set to come out in the fall of 2019.