Follow three international students to see how they celebrate their culture

Malak Al Turki is an international student from Saudi Arabia. After getting married in Saudi Arabia, she moved to the United States in 2015 with her husband to start school at ASU, where she is currently a sophomore studying chemical engineering. Al Turki explains the challenges that come with having an eighteen-month-old daughter, Jehan, and what it is like taking care of her home along with her studies at school. Time management is what keeps her in check with all of her responsibilities. Coming from Saudi Arabia, she expresses that she misses her family and knowing that they will be reunited soon motivates her to do well in school and with her new family. Al Turki brings part of her culture and religion with her. She wears a hijab and follows the traditions of prayer and fasting. Some hobbies of hers are going on nature walks with her family and reading novels.

Mohit Kapoor was born and raised in Mumbai, India. In August 2016, Kapoor came to the United States to study at ASU for his masters in structural engineering. This is his final semester at ASU, and he will be graduating in May 2018. At ASU, he works as a transcriber for the DRC Alternative Format, converting documents that are easily accessible. After his family, of course, he misses the food especially from India and aspires to make a butter chicken dish just like his brother. His brother would make it perfectly, according to Kapoor, and he explains that he has not yet mastered the dish, but hopes to one day cook with his brother back in India and learn his secret recipe. Kapoor loves his family and friends, and in the Indian culture, they celebrate many festivals and gatherings, one called Holi, the “festival of colors.” The Indian Student Association held the event, Holi, on ASU’s campus and Kapoor, along with his friends, went there to celebrate with colored powder and to appreciate the culture.

Monica Hsu is from Taiwan and came to the United States in 2016. She came to ASU to complete her masters degree in mechanical engineering. She will also be graduating this spring semester in May 2018. Hsu has been involved with an automotive engineering competition called the EcoCAR 3. The EcoCAR 3 is the most recent US Department of Energy (DOE) Advanced Vehicle Technology Competition (AVTC) series, which invites 16 North American university teams that are participating in the competition to redesign a 2016 Chevrolet Camaro. Hsu is the controls team lead, assisting with the technology such as controllers and electrical systems. In the future, she would like to work in an automotive industry to achieve zero fatalities. During her undergraduate years in Taiwan, Hsu was able to hear about Christianity and became a Christian believer when her professor talked about the Bible. Only about four percent of Taiwanese people are Christian, and because of this, she was not able to be around other Christians. Her family members are not Christian, so coming to the United States, it was important to her to find a Christian group. She found a group called the Navigators and meets with them for events and bible studies. Living in the United States, she is not surrounded by much of the Taiwan culture, so she often cooks Taiwanese food at home and was able to demonstrate what chili noodles were, along with some condiments that go with the dish. Hsu’s closest tie to her Taiwanese culture in the United States is through the food that she eats. 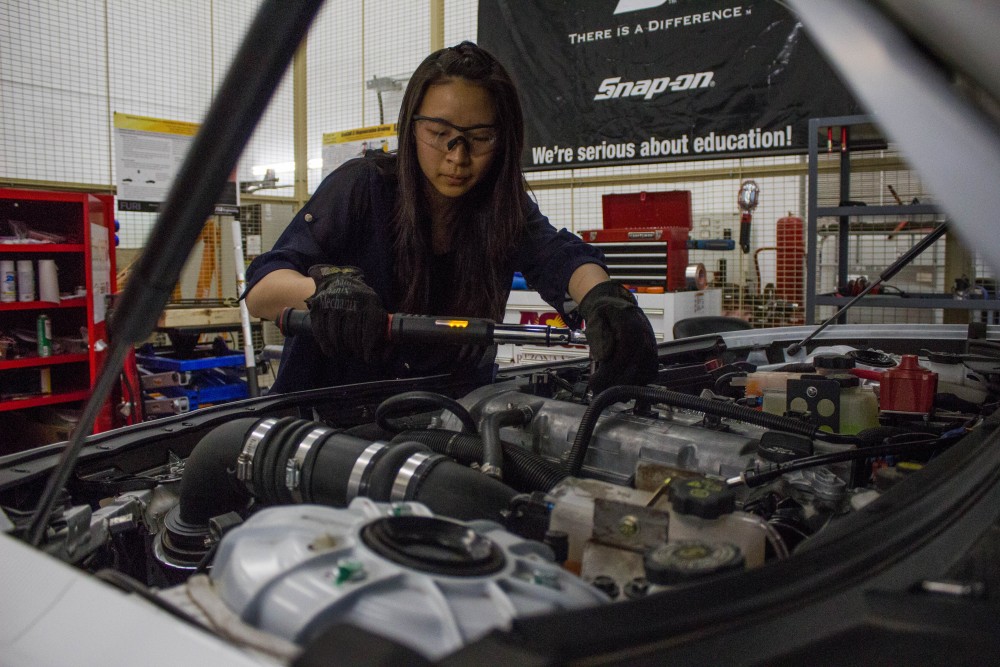