For 15 years, ASU funding requests to the Arizona Legislature for building repairs and safety improvements have been ignored amid complaints of disrepair, according to ASU documents and officials.

ASU has received less than 1.5 percent of the funding it requested for building maintenance since 2002, and a 2016-2017 survey of ASU faculty showed 24 percent of respondents reported maintenance problems on campus.

In the survey, ASU faculty reported issues with water leaks in classrooms, elevator malfunctions, insect infestations and asbestos tiles in poor condition, among other structural components.

In 2014, The State Press reported leaking pipes and water damage in the Physical Science and Engineering Research buildings as well as power outages across campus. ASU Facilities Development and Management declined an interview about recent maintenance funding and its effects on campus.

The lack of funding runs counter to the Arizona Constitution's guarantee of "proper maintenance of all state educational institutions."

James Sliwicki, the director of ASU budget operations, said maintenance issues at ASU are mostly paid for by taking on debt through bond issuances. 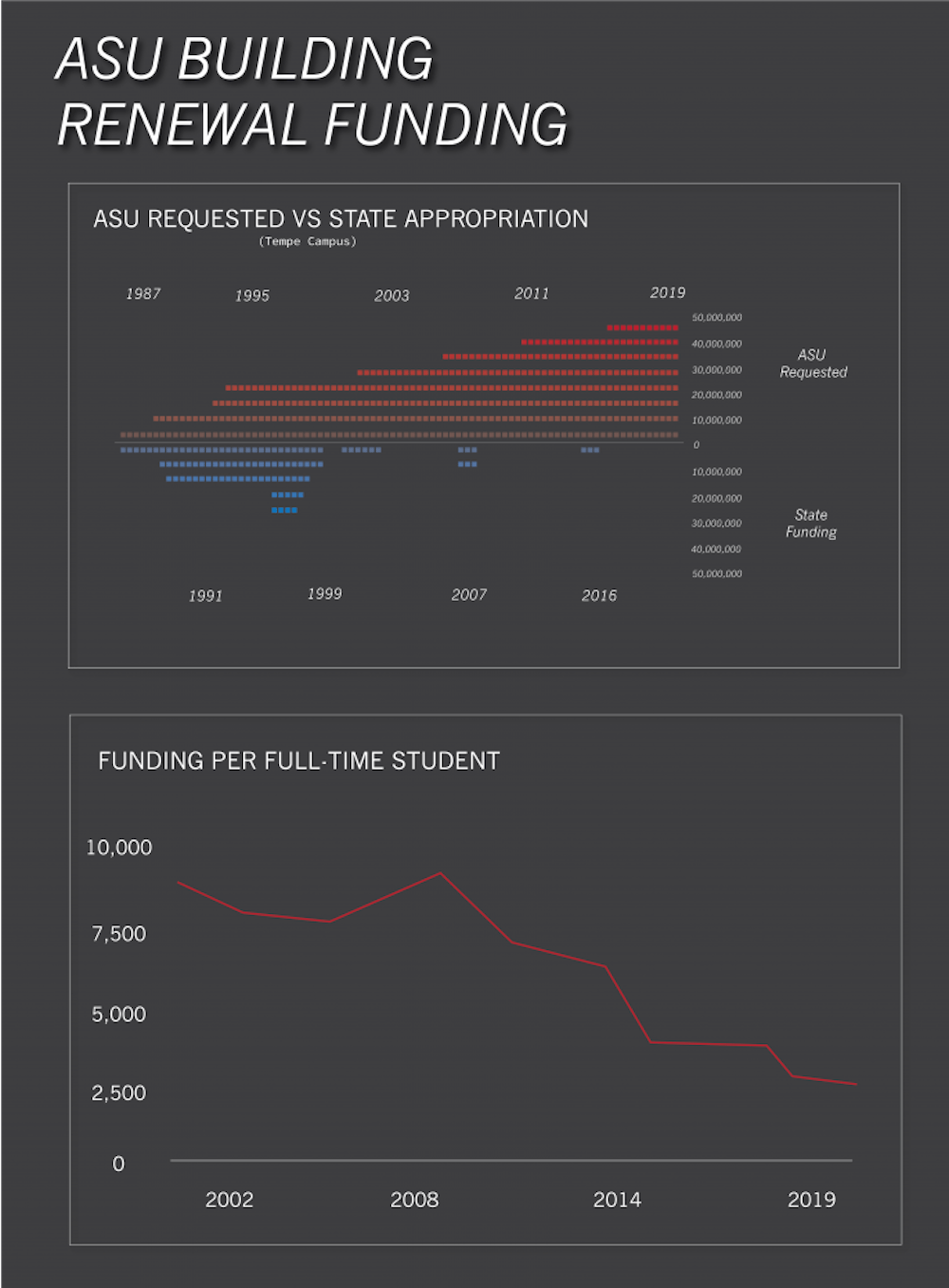 Essentially, ASU pays for maintenance by taking out loans and then paying them back with tuition dollars.

“We pay for the bonds with tuition because that’s really the only money we have,” Sliwicki said. “At the end of the day, tuition is paying more and more of the price of what the state has really not stepped up to cover.”

The money that universities borrow for these needs is referred to as deferred maintenance. Arizona universities are required by law to calculate the costs of maintenance and submit it to the legislature.

Sliwicki said ASU has received less than 10 percent of the total money requested since 1986.

This results in a backlog of maintenance funds that bleeds tuition dollars, he said, and forces ASU to prioritize the highest needs, like fire safety and elevator repairs, while less immediate issues are neglected.

“The deferred maintenance needs are real; we do have leaking roofs and issues,” Sliwicki said. “There are always going to be projects that just don’t make the cut ... because other priorities (that) arise in the meantime take precedent.”

Sliwicki said the legislature doesn't fund university maintenance because the state doesn't have enough money and they expect the universities to cover it.

"In short, there’s not enough money (in the legislature) to pay for everything," Sliwicki said.

In the letter, Klein referred to $671 million that public in-state universities had to borrow to pay for maintenance needs such as fire alarms, roofs, and asbestos mitigation.

UA has faced similar maintenance issues due to the lack of legislative funding.

Arizona Public Media reported in March last year that UA students and faculty complained about poor air quality and respiratory issues inside a science building that was behind in maintenance due to lack of funding.

This lack of funding for maintenance hit UA again the year before, when an electrical failure at Banner-University Medical Center in Tucson cut power to the hospital, according to The Arizona Center for Investigative Reporting.

"I thought, 'My god, when was the last time we did that?'" Brophy McGee said.

She said maintenance for universities has been a low priority for years.

"There are just so many needs and limited funds, and that’s been the case since I’ve been involved in politics," Brophy McGee said.

However, she said the legislature did pass an important spending bill in 2017 to help remedy building problems at Arizona public universities.

The spending bill will allow universities to borrow and split $1 billion over the next 24 years.

"The legislature passed the bill that allows for a billion dollars in bonding for the building of new facilities and also the maintenance," Boyer said. "If a billion dollars of bonding capability doesn’t help mitigate that then I’d like to know where that money is being spent."

In an email, Sliwicki said the funds provided by the bill could pay for part of the maintenance backlog if the University administration decides to spend it that way.

The extra money may not be enough to pay off deferred maintenance for buildings at ASU, according to data provided by Budget Operations.

The estimated amount of deferred maintenance at the end of 2019 was over $268 million, which is a little over a quarter of the spending bill's bond allocation for the three state public universities.

Brophy McGee said the state struggles to balance funding for important priorities, even failing to maintain its own buildings.

The long-term lack of funding for buildings matches the trend of slumping support for universities from the Arizona Legislature.

ASU President Michael Crow and ABOR have asked policymakers to provide universities half the cost of in-state student tuition.

Sliwicki said Arizona did give over $4 million to ASU in 2017 to help meet resident tuition at 50 percent, however, that amount covers less than 5 percent of what is needed.

Sliwicki said there were no appropriations for 2018 or 2019 to meet resident student tuition any further.

In an interview with The State Press on March 2, Crow said the state is "grossly under-investing in the students from Arizona."

"The state’s investment is way below where it needs to be," Crow said. "We want the state to fund half of the cost (of in-state tuition) and occasionally, every once in a while, a research building ... meaning we can build things and make things happen."

Crow highlighted the unusual nature of lacking public funding for universities in a speech at the Operational Financial Review event in February, which is available on YouTube.

"At most universities, at Penn State, Ohio State, Michigan State, ...  they have fabulous administration buildings built in unbelievable glory from public resources," Crow said at the event. "We have no such thing. We have no such investments. We have nothing."