In a lecture hall built to sit over 100 students, four people gathered to hear about what should be done if an active shooter came to any of ASU’s campuses at a seminar in late February.

He said cars make good shelter if an emergency breaks out near a lot. The engine is the best part to hide behind because it's the thickest, he said.

The biggest takeaway: People should run, hide or fight depending on the often hard to predict situation.

In case of an emergency, ASU has plans in place for how students should react — but those plans have limits. In recent years, active shooter emergencies have plagued the U.S., and four of the 10 deadliest single-day shootings took place at schools.

Currently, the University offers training courses for students to prepare for the possibility of a mass shooting and is planning on making those courses required.

There is a detailed, tactical response plan for law enforcement and the University, said Allen Clark, executive director of preparedness and security initiatives. But he said the ASU Emergency Operations Plan was unavailable for viewing by The State Press, citing security concerns.

Other large universities and government agencies, including Virginia Tech University — which had its own high-profile shooting in 2007 — and the Federal Bureau of Investigation, teach the Run-Hide-Fight plan in case of an active shooter.

It was the Virginia Tech shooting that changed the calculus for campus security staff at colleges across the country.

"Changes began happening at the state level immediately. Around the country, emergency preparedness task forces were being formed, attorneys general were being commissioned to evaluate school security and recommendations were being made for emergency response standards and requirements," wrote Zach Winn in a 2017 article for Campus Safety Magazine, a trade publication tailored to hospital, school and university security staff.

A report presented to then-Virginia Governor Tim Kaine in 2009 about the shooting addresses lapses in several security protocols that are standard in ASU's shooter plans.

The Virginia Tech Police Department "erred in not requesting that the Policy Group issue a campus-wide notification that two persons had been killed and that all students and staff should be cautious and alert," the report said. Moreover, "senior university administrators, acting as the emergency Policy Group, failed to issue an all-campus notification about the ... killings until almost 2 hours had elapsed. University practice may have conflicted with written policies."

And while responders successfully followed directives calling for a triage of victims, the report identified organizational shortfalls in leadership and the dissemination of information and resources to families — all priorities in ASU's plans.

The University has an emergency response guide, which guides students on how to act in certain situations, ranging from fires to chemical spills in a classroom. It does not make specific mention of an active shooter situation.

Everyone should be aware of their surroundings, especially in an emergency situation, ASU Police Sergeant Parker Dunwoody said in a statement.

"Sometimes the way you came in will not be safe to go out. Sometimes it is safer to shelter in place," he said in the statement. "The premise of the active shooter training is to get you thinking about your safety until first responders can arrive on the scene.”

The University also offers six instructional videos online that students can sign up for through MyASU. Each deals with a different potential active shooter scenario, such as in a place of work, on campus or in a domestic setting.

ASU offers instructional videos and a course on active shooter training on the Tempe Campus almost weekly, but both are optional. When State Press reporters went to two different trainings, only a small handful of people were present.

On the West, Downtown Phoenix and Polytechnic campuses, students or faculty can request the training at any time from ASU's crime prevention unit, Harris said in an email. Tempe students can also request specific training for their club or department.

Clark is making a shorter video on active shooter training that will be mandatory in the future for ASU students and faculty, Clark said.

Eventually, he said it could be included in MyASU to-do lists, the priority tasks section on student and staff ASU accounts. These tasks can range from advising holds to surveys and financial aid updates.

When the University needs to get an alert to its students and faculty quickly, it turns to its LiveSafe app, which gives push alerts and advisories. Those who have the app on smartphones get notifications when emergencies occur on or near campus and can use the app to get assistance walking home through location tracking, among other features.

The app is geofenced, meaning only users near the incident will receive push notifications. This is good for members of the ASU community who were tired of receiving dozens of alerts about bee hives and other inconveniences.

About 16,500 students, administrators, faculty and staff at ASU have downloaded the app, according to Rudy Bellavia, managing director and chief of staff for the Office of Business and Finance, who brought the app to ASU. This means that about 19 percent of the ASU community has downloaded LiveSafe.

If a student does not have the app, ASU will send an emergency text or call to students if there is a serious threat such as a shooter.

ASU President Michael Crow said getting an emergency alert out to the ASU community would be key if an active shooter were to come onto campus. He noted that ASU Police is trained to deal with such a situation.

In a crisis situation, ASU Police is capable of making decisions and acting without approval from Crow or other University officials, he said.

ASU Police has contact with other police departments throughout the Valley, which would be important during an emergency situation, Crow said.

The Tempe Police Department has assisted in arresting people who have made threats on the University in the past.

"We have dealt with, through the years, a number of complicated issues with people making threats against the University," he said. "All of those people have been brought to justice."

In 2015, there was a threat of a shooting on ASU made via 4chan, an online message board. Though it turned out to be false and from a 12-year-old in Canada, the child was arrested.

This year, a former ASU student threatened Sun Devil Athletics on Twitter, he was quickly arrested and no attack took place.

ASU takes such threats very seriously, Crow said. If there is a threat on campus and the University finds out, that student or faculty member will be suspended while an investigation takes place.

Clark said the University has a Behavioral Response Team that addresses worrying behaviors in a "hazard mitigation" capacity.

"If somebody comes onto the radar screen and we're worried about their behaviors, what they're saying, this team assembles," he said. "It's gonna involve clinicians, counselors, law enforcement, a whole host of people from around the campus that then looks at their actions and social media. They're going to try to research what they can and ... give kind of insight to the administration on do we feel is a threat legitimate or is it not a legitimate threat."

Of all the responses that mass shootings generate, one of the most common is an inquiry into the shooter's mental health. This is reflected in portions of ASU's plan to address a shooter scenario.

If there were to be a shooter or other attack on an ASU campus, there would be counselors at the scene ready to help people, Clark said.

"We have approximately 30 clinician counselors, which is an extremely large pool," he said. "And so all of those will come to bear in our plan, all of them will be either dispatched out to site to start dealing with people that are on the site."

Crow said most campus shootings around the country have been done by mentally unstable individuals, so the University has plans to try and help such people before these instances occur.

ASU's counseling department offers services including individual counseling, crisis services and outreach services. This platform allows students to seek help for themselves as well as for others when needed.

Clark said in most instances, counselors are bound by patient confidentiality but there are some cases where they can divulge information about their clients if there is a credible security threat.

“ASU works hard to raise awareness of and provide training to faculty, staff, and students on how to recognize student mental health concerns,” Associate Vice President and Director of ASU Counseling Services Aaron Krasnow said in an email. “We do this through extensive trainings and online resources.”

Plans work, until they don't

ASU crime prevention coordinator Charles Eberspacher taught the active shooter training on Feb. 27 and said students and faculty should come up with a plan as a class or department based on their specific building.

ASU requires that every building has an emergency evacuation plan for various possible situations that could arise.

"The first step in preparing for the unforeseen emergency which may cause the entire and/or partial evacuation of a building is to create an Emergency Evacuation Plan," according to the plan template, which leaves room for customization based on the building.

Gina Sleeper, a freshman studying aerospace engineering with a focus in astronautics, attended the recent active shooter training because she realized she was not prepared for such a situation.

She originally heard about the training under the "Events" section on the Sun Devil Rewards app.

"Every day, the app lists events occurring on all ASU campuses and provides information on their time, location, and cost," said Sleeper.

Sleeper said attending the event gave her a feeling of reassurance.

"I feel like I would be more prepared to respond accordingly to that in a way that would be safer for me," said Sleeper.

But preparations, plans, command structures and mobile apps can only help so much. Active shooter situations have an inherent unpredictability, Eberspacher said.

“You could be right today and wrong tomorrow,” he said to students at the training session.

Video: Hayden expands on the tradition of a library

By Zachary Van Arsdale | 19 hours ago 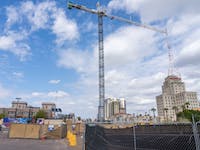 By Greta Forslund | 21 hours ago

By Katelyn Reinhart | 21 hours ago