Semester in Lyon: The French strike

The French are known to protest government policies

The French love a good strike.

This isn’t a stereotype.

The right to strike in France is written in their constitution, and they consider it one of the only ways to get the benefits that the people deserve.

I hadn’t really thought about la grève, or the strike, until last week. I was told in one of my classes that the metro wouldn’t be working on Thursday, March 22 because the workers were on strike.

Some of classmates were outraged because they live far away from the school, rely on the metro for transportation and have midterms on that day.

Then, we were told starting April that Société nationale des chemins de fer français, or the government-owned train system, would be on a strike schedule for three months. The workers would strike for two days, then work for three days and repeat.

SNCF workers are striking because of President Emmanuel Macron’s train system reform to become competitive – France will be introducing private railroad companies. This means less benefits for SNCF workers because the company will need to have a profit instead of depending on the French government.

Unfortunately, April is when my university has a two-week long break, so all the students usually travel throughout Europe. My mother is coming for it, and we have plans to use the train to go from Lyon to Paris and from Paris to London.

Our travel plans don’t fall on days when there is a scheduled strike, but it did make me think. I understand the greater picture and why the people feel the need to strike. On the other hand, there are people who rely on the train system for their commute to work and for their travel plans.

Despite all of this, I wasn’t face-to-face with the reality of the French strike until March 22. I live close to the school, so I managed to avoid the craziness with the metro strike.

However, I came to school to find every entrance to the school barricaded. My university isn’t as open or as large as ASU. It’s one very large building with courtyards inside. So if the entrances are barricaded, there’s no getting inside. 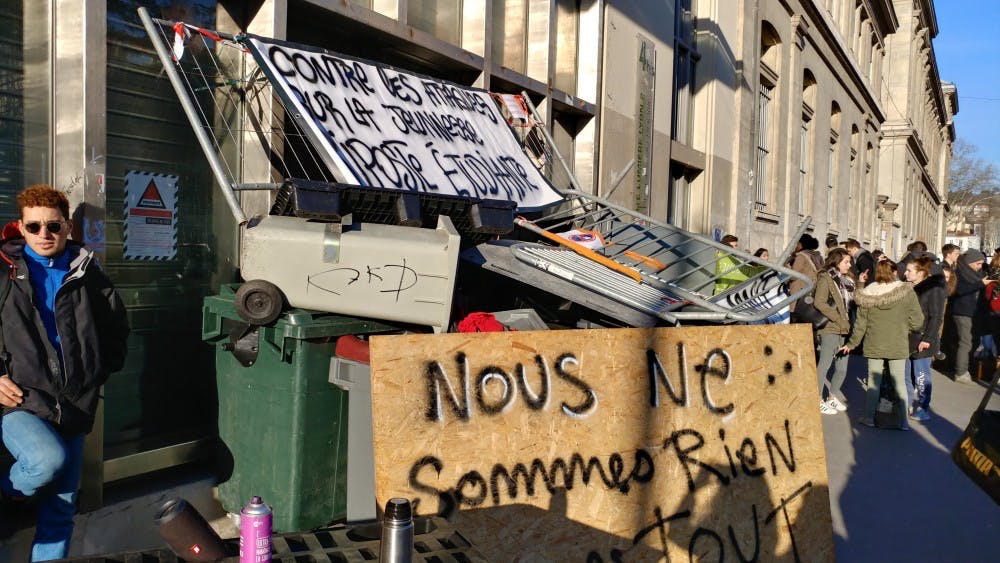 Alexa Buechler
When I showed up for class on Thursday, March 22, I found all the doors barricaded. The barricade pictured is in front of the main entrance of the school, University of Lyon 2.

This strike was due to new selection policy for universities. The French government pays for students to receive a higher education; however, now they are selecting which students go to university because they can’t afford to send everyone.

My classes were cancelled for the day. The following week, I was shocked when my French teachers told us that these were mild strikes, and some universities had been closed for weeks.

I guess I only had a small taste of the French strike.