Fashionistas and techies alike are joining forces to create garments that speak to people, both figuratively and literally.

These garments, all wearable tech, spread awareness on important topics and provide functions through clothing that can benefit wearers.

This marriage of clothing and coding comes through ASU's Fashion Technology class, which allows students to contribute to the growing world of functional, technological clothing.

The class is taught by Galina Mihaleva, a visiting Assistant Professor at ASU, and the class focuses on how technology can be used in clothing to complement the functions of the human body and enhance personal expression.

On April 4, there was a Wearables in Smart Fabrics Fashion Show that reflected these values by displaying ASU students' creations. The tech ranged from a Social Armor Jacket that reacts to physical signs of anxiety to offer a protective shell for the wearer, to a garment that suppresses the pain of menstrual cramps though thermotherapy and aromatherapy.

Interdisciplinary studies junior Benjamin Viton, who won best overall for function and aesthetic, created a tracksuit that was inspired by the conversation around sexually transmitted infections.

On the sleeves of Viton’s tracksuit, there are technological stripes that display changing text with information on STIs.

“I wanted to make a garment that will literally have the conversation– a conversation whether it’s educating people or destigmatizing sexually transmitted infections,” Viton said.

He created this effect by incorporating digitally addressable LED strips. He chose this specific type of LED light to have more control of the different colors and brightness of the scrolling text.

He said he programmed the technology and created the tracksuit with little experience in the subjects of fashion design and computer science.

Viton said that the class called together students studying different subjects, an experience that doesn't occur often when students stick to classes in their major maps. He said that these students learned from people in different industries as well.

"We were having all of these International Fashion speakers coming in and talking about their relationship with technology and engineering people," Viton said. "We learned how all of these different fields science and design come hand-in-hand.”

Dennita Sewell, a professor of practice in the Herberger Institute for Design and the Arts said that wearable technology has been evolving over the past few decades as technology has become a greater part of peoples' lives.

“I think this whole project really planted a seed and hopefully encouraged (students) and gave them the tools to look at this in a larger way,” Sewell said. “I think textiles will become and are becoming an increasingly important part of this wearable technology world and this real area of investigation and research.”

Sewell said that these students, who are from different educational backgrounds, became successful in their work through collaborating and teaching one another.

“The class was comprised of engineers as well as fashion students,” Sewell said. “By collaborating, they were able to share their knowledge to come up with the final product.” 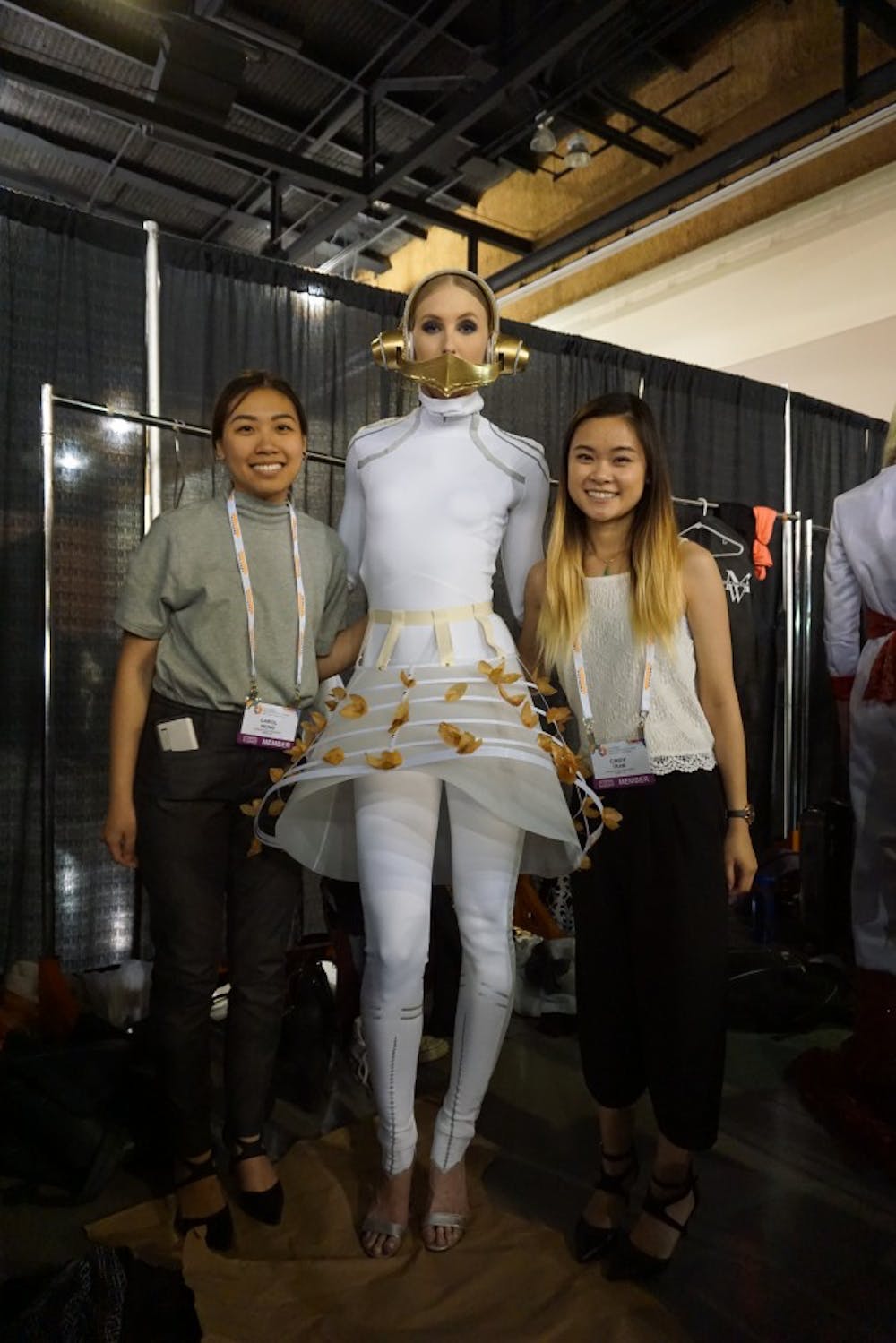 Cousins Cindy Tran, an Industrial design senior, and Carol Wong, a fashion design senior, created a garment to bring awareness to the different types of pollution in urban cities.

“We created a mask where a model presses a button and it will come up and cover her nose,” Tran said. “Our garment is actually a jumpsuit which can help protect the user from the air pollution if the person is exposed to air pollution for a long period of time because (pollution) can also affect their skin.”

“For waste pollution, we wanted to find a different type of material to use,” Tran said. “We used kombucha … It can be an alternative material that can be used in textile. It's also very sustainable by taking the waste product of the kombucha drinks and turning it into something that people can wear.”

They created their futuristic piece by playing to each other’s strengths – Tran learned how to code and completed most of the coding for the garment, where Wong completed more of the design elements.

Steven Tepper, dean of the Herberger Institute, described how incorporating technology into fashion is not new.

He said that technology sometimes gets incorporated into fashion, not simply because of aesthetics or because of function, but also because of novelty.

“When we think of new technology and fashion," Tepper said in an email, "it is important to think about its function and how it synchronizes with other social changes – not just the incorporation of technology for technology’s sake.”