Movies and Munchies: Scott Pilgrim vs. the World

Editors MacKinley Lutes-Adlhoch and Grace Oldham eat their way through popular films, reviewing them and pairing them with the perfect movie snack.

Ramona Flowers, Knives Chau, Sex Bob-omb — all phrases that sound like they were randomly generated on a sketchy website. But these names make complete sense to the cult following of the 2010 film “Scott Pilgrim vs. the World”.

This movie, adapted from graphic novels by Bryan Lee O’Malley, follows Scott Pilgrim, a Toronto-based bassist in the band Sex Bob-omb. Pilgrim falls head over heels for an Amazon delivery girl named Ramona Flowers, and he must defeat her seven evil exes in order to win her heart.

Despite bombing at the box office when it was released, this film is rated with an 81 percent on Rotten Tomatoes. It grossed about 30 million dollars at the box office but spent around 60 million dollars on production, according to Box Office Mojo. Eight years later, it has a cult fan base that praises its humor and originality — and it was just made available to stream on Netflix.

Familiar to anyone who has seen the film, people who don't eat animal products have "vegan powers." These cookies are not only a perfect movie munchie, but they're void of any eggs or dairy, making them the ideal snack to elicit superpowers. 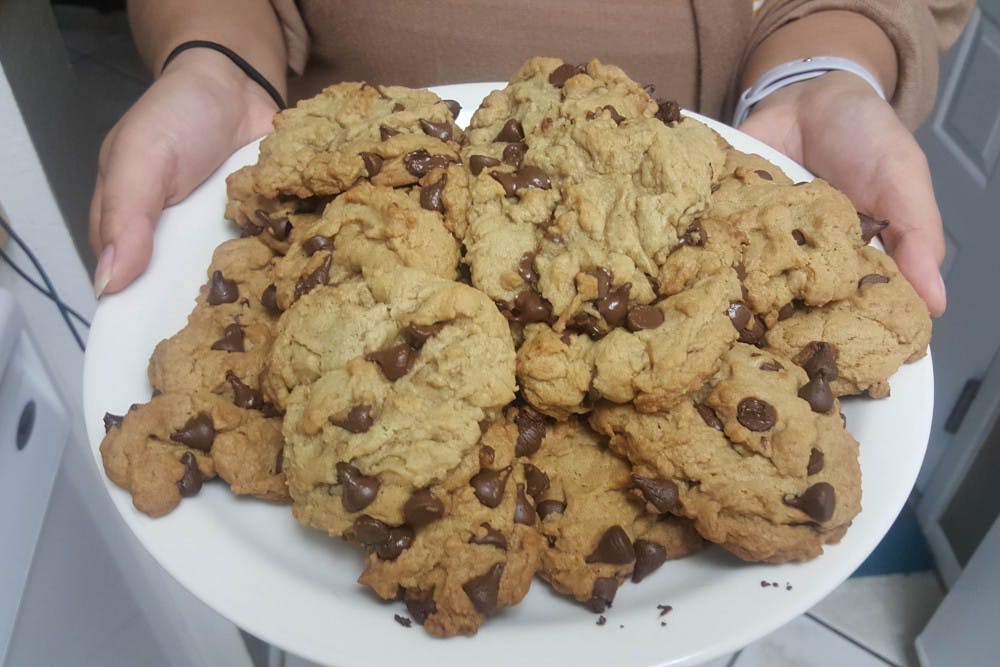 Any chocolate chip cookie recipe will do – just be sure to substitute animal ingredients to make them vegan. Instead of eggs, use a mix of ground flax seeds and water. Rather than cow's milk, try coconut milk or almond milk. Make sure the chocolate is vegan too and doesn't have milk in it. We used this recipe.

What can be called star-studded cast now was not nearly as renowned when the movie was released. At the time, cast members like Aubrey Plaza, Brie Larson and Anna Kendrick weren’t nearly as popular, but now they’re some of Hollywood’s favorite leads.

Michael Cera is a timeless choice for a funny lead, and he plays the part of Scott Pilgrim so well — it’s hard to imagine the character as anyone else. The 'indie boy in a dumb band' trope isn’t rare in film, and Cera portrays Pilgrim in a funny, awkward way that was fresh to viewers.

The film has a long list of odd characters, and since it is based on graphic novels, some of these actors play roles that have special powers or abilities. This cast is able to manage the unconventional film style very well.

The film's presentation, dominated by animations and graphics complements the comic book-style story. Pilgrim setting out to battle his love interest’s seven evil exes is a fun and exciting twist on the typical movie romance. The dramatics of hand-to-hand combat juxtaposed with Cera's dorky personality are entertaining and unexpected.

This soundtrack was largely written and produced specifically for the movie with help from prominent figures in the industry such as Beck and Radiohead producer Nigel Godrich.

Sex Bob-omb’s music, and the music of other fictional bands in the movie, is heavily reminiscent of angsty teen metal-influenced rock.

Their music almost makes fun of itself at times though, like in the intro to “Threshold” when Michael Cera screams “We are Sex Bob-omb, and we’re here to make you think about death and get sad and stuff!”

It’s a soundtrack perfectly curated for the film, though it’s not the most listenable album outside of the context of the movie.

Scott Pilgrim is a pretty problematic character for dating a 17-year-old high school student while he’s 23. He falls in love with a girl he barely knows, and this illustrates symptomatic issues of idealizing women. The industry should be aiming to work through these issues rather than glorify them.

This film glosses over the magnitude of these issues that are especially relevant now as Hollywood is taking a hard look at inappropriate relationships and the mistreatment of women. Ramona Flowers is treated as just another manic pixie dream girl — and that's not what viewers want.

In 2018, these themes are definitely still relevant, but this makes Scott Pilgrim relevant for the wrong reasons.

Scott Pilgrim vs. the World was a creative and fresh addition to the world of film, and with a star-studded cast, original music and unique production, it earns a 4 out of 5 stars. So grab the remote and the almond milk, and get ready to be immersed in Scott Pilgrim's world.