October 11 is National Coming Out day, and ASU is celebrating Pride Week with multiple events across campus

As the ASU charter states, the University prides itself on being inclusive and and giving students the opportunity to thrive no matter their identities.

Thursday, Oct. 11 is National Coming Out day, and Pride Week events are being hosted by multiple student organizations across ASU from Oct. 10 to 21.

Gayatri Girirajan, a junior studying urban planning and geography, encourages LGBT+ students and allies to get involved with Pride Week events and Rainbow Coalition, the umbrella organization for all LGBT+ student organizations at ASU.

As the president of Rainbow Coalition, Girirajan strives to advocate for students and create a safe and a healthy learning environment for them to thrive.

“We are currently working on bringing the community together so people know each other, and be inclusive in the broader ASU community,” Girirajan said. “More students want to see themselves represented in ASU spaces.”

Rainbow Coalition is encouraging students to use the hashtags #shoutOutASU #ThriveAsuAre on social media to share their coming out stories to be featured on Culture@ASU's Instagram.

Malik Ashe, a sophomore undeclared major, came out as gay when he was 17 years old.

“For me, coming out was not as much about telling my friends and family, but more about embracing my identity in the gay community,” Ashe said.

Ashe has faced not only discrimination as being a gay man, but also being a black man. Often, he felt people wanted him to choose between his two biggest identities.

Ashe has also dealt with colorist gay men in the black community who said they wouldn't date him specifically because he was black.

"There are guys who told me I'm pretty for a black boy, which is an insult," he said. "Black is beautiful and I'm pretty because I'm me."

Ashe grew up in a single-parent household with his mom in New York and chose to come to ASU to step out of his comfort zone and challenge himself to being on his own.

Ashe said his mother has been his biggest supporter, despite her concern for his safety.

“My mom grew up in a time when racism was at a peak, so she feels that me being black and being gay can be a double target,” Ashe said.

Ashe said that even though being gay is a big part of his identity, he's not looking to date right now but is instead focuses on his academics, making friends, and his position on the Phoenix Storm Rugby Football Club.

“I’m not focused on love right now because I’m focused on being the best that I can be,” Ashe said. “I’m still figuring out who I am and learning about myself.”

Ashe said he believes it's important for students to embrace and celebrate all their identities equally.

“Try to create a bridge between your ... identities and make yourself comfortable, open minded and be honest with yourself,” Ashe said. “Anyone can do it."

Julie Tjalas is a junior majoring in film and media production and the president of TransFam at ASU.

Born and raised in Tucson, she started to realize in eighth grade that she was suppressing feelings and emotions about her identity. She said she knew about the LGBT+ community and wanted to experiment with gender nonconformity and her sexual orientation.

Tjalas chose ASU so she wouldn't be too far from her friends but she could still have some space away from her family to freely express her identity. Tjalas said that as a freshman she started telling her college friends that she identifies as a woman.

“My way of coming out to people was adding them on my social media so they can see my appearance,” she said. “I made sure people knew me by my name — the real me, and not the lie I lived for 18 years.”

Tjalas originally came out to her family as bisexual, but opening up about her gender identity took a little more time.

“It was difficult at first, I came out to my mom a week before school started and she was surprised but supportive," she said.

A week later, she made a coming out video for her dad to watch.

However, her father now calls her by her preferred name, addresses her as his daughter and uses she/her pronouns.

When beginning her transition, Tjalas remembers how people would stare at her when she was trying to grow her hair out before she was on hormone replacement therapy, which would make her uneasy. 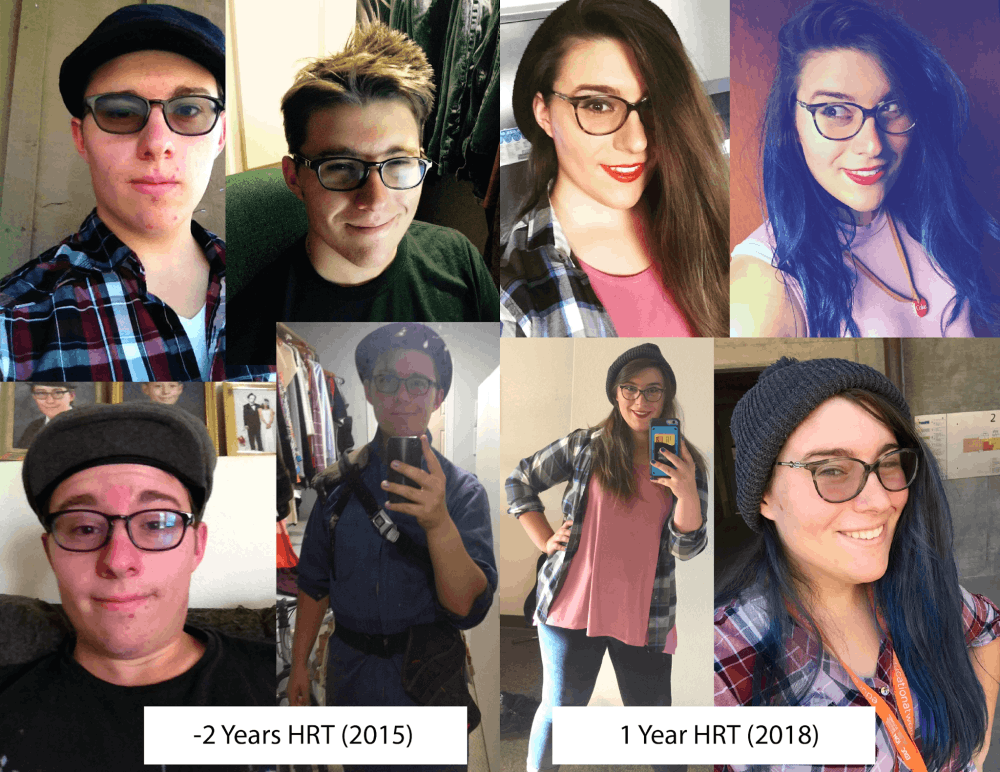 "I'm the happiest about my appearance more than ever," Tjalas said.

However, Tjalas said she has experienced transphobia while living on-campus. When living in the dorms freshman year, her CA went around asking the other girls on the floor if they were comfortable with “the transgender” using their bathroom.

Despite the feelings of isolation at the time, Tjalas said she didn't report the incident because she “didn’t want to cause any trouble and wanted to be safe."

Tjalas said that many transgender students, including her, don't always feel the most comfortable using the bathrooms that align with their gender identity, especially when beginning their transition.

“There is a map on-campus of all the gender neutral bathroom that my non-binary and preposition friends rely on to feel the safest," she said.

Despite the transphobia she has experienced on campus, Tjalas said that LGBT+ clubs at ASU make her feel more welcomed and that there is one "for every shade of the rainbow.”

For more information on campus resources and organizations, students can go to Out@ASU's website.

Correction: A previous version of this article incorrectly referred to Malik Ashe as a member of the ASU Men's Rugby Team. He is a member of the Phoenix Storm Rugby Football Club. The article has been updated to reflect this.