Movies and Munchies: The Nightmare Before Christmas

Editors MacKinley Lutes-Adlhoch and Grace Oldham eat their way through popular films, reviewing them and pairing them with the perfect movie snack.

Somewhere between a spooky classic and a festive tale, “The Nightmare Before Christmas” might just be claymation genius Tim Burton’s best-known film.

The 1993 feature has a 95 percent on Rotten Tomatoes and has remained a holiday-season staple for the 25 years. “Nightmare” and “Christmas” are rarely paired in the same sentence, and many wonder which holiday the movie belongs to. Director Henry Selick said at the Telluride Horror Show that it is definitively a Halloween movie.

With clarification provided, pair the spooky flick with some homemade Jack Skellington-inspired Oreo cookies and curl up on the couch with friends ready for a fright.

In a small bowl, microwave white candy melts in 15-second intervals until completely melted and creamy.

Dip Oreo cookies into the candy, making sure they are coated on all sides and remove with a fork or other utensil.

Set cookies on a parchment-lined baking sheet to cool. 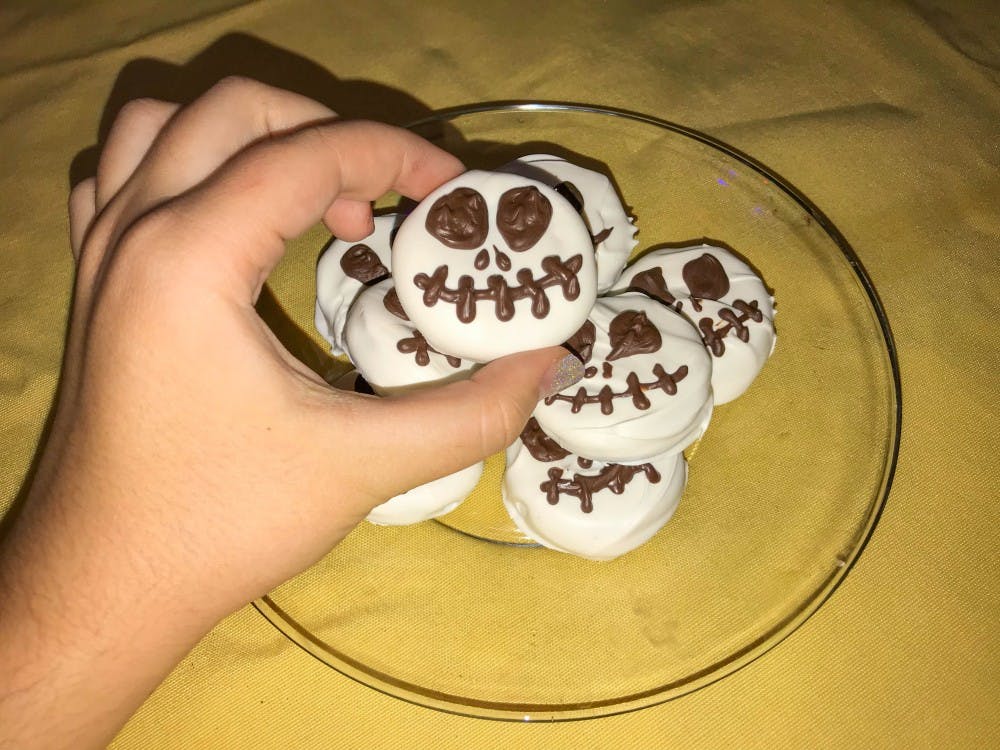 Pour warm candy into a plastic bag, cut off the tip and pipe chocolate onto the cookies in the style of Jack Skellington’s face.

Grab a glass of milk for dipping and enjoy!

Jack Skellington, aka the Pumpkin King, voiced by Chris Sarandon, is played with such passion and care that the audience finds itself rooting for Jack — even though he practically orders a hit on Santa Claus.

Through just a voice, Sarandon is able to portray the wide array of emotions Jack expresses with the over 400 clay heads made for the character.

The rest of the cast is comprised of voices that are suited for each wildly unique and creepy character.

Nearly every cast member sings at some point in the film, and it’s easy to tell careful consideration was put into the voice actors’ abilities to depict a character’s personality even in song.

Inspired by the poem “Twas’ the Night Before Christmas,” this film simultaneously explores a lighter side of Halloween and a darker side of Christmas. The plot quickly transitions from scenes of the boogie man to elves in a factory, and like fries dipped in ice cream, it shouldn’t work, but it just does.

There’s horror, there’s joy, and there’s love all wrapped up in a clay wonderland of jolliness and horror. The storyline humanizes very inhumane characters, and while the concept of the film is admittedly strange, the plot progresses at a nice pace and is written to be enjoyable for kids and adults alike.

The score is, in a word, iconic. American composer Danny Elfman is widely recognized for his work in “The Nightmare Before Christmas.” “This is Halloween,” maybe the most well-known song on the album, is an ominous theme that graces the party playlists of all holiday fanatics.

The fact that string-heavy, more classically-categorized tunes gained such popularity is a testament to the prominence of Elfman’s songs. He’s able to perfectly marry the tone of the film with the essence of Halloween.

There’s something to be said for the fact that the film has held up for 25 years.

Claymation prevents “The Nightmare Before Christmas” from being too visibly dated, perhaps even adding a vintage feel that furthers the intended eerie mood.

The plot centers around Jack feeling lost and wanting to find himself — a place every college student has been before. However, as a whole, it’s mostly fun and fearful fiction rather than culturally-relevant. The movie's themes are more timeless than generational.

"The Nightmare Before Christmas" is arguably the most unique Halloween movie ever made. From Burton's expert eye for claymation to the odd blend of happy and horror, this film is one that has stood the test of time.