New Disney club at ASU is off to a magical start

The magic of Disney's international brand has reached ASU's Tempe campus through the new Mouseketeers at ASU club.

The club's main goal is to host successful professionals who have been involved with the Disney company and can share their knowledge and experiences with students who are interested in a career with Disney, according to its website.

Jenny Galliger, the Mouseketeers at ASU president and a sophomore art studies major at the Herberger Institute for Design and Arts, said she hopes to give students connections to people within the entertainment industry.

“It all started with a mouse. You can have the smallest idea (or) dream and then have it turn into a six park empire with millions of visitors every day and have people that are so imaginative in that team to be able to bring stories like ‘Star Wars’ and ‘Beauty and the Beast’ to life and have these timeless tales,” Galliger said.

Galliger said the club, which started holding events this semester, hopes to bring the community of Disney lovers at ASU together to promote the same environment of magic and positivity that Disney is known for, especially for students who may be feeling pressure during college.

“It only takes a little spark of imagination to really make anything happen for what you want to do through college,” she said.

David Boyles, ASU English instructor and the Mouseketeers' faculty advisor, said the club is a great example of students taking something they are interested and creating a community for other students to connect.

“I really like that idea of students bringing in things that they are passionate about outside of the classroom, stuff that they have a strong connection to and making it a part of their identity as students,” Boyles said.

He said the club is working hard to emulate the spirit of Disney through their leadership.

“(Disney) has a strong message of positivity and inclusion that really speaks to young people, especially people who might feel like outsiders sometimes,” he said.

Galliger said she wants the Mouseketeers at ASU to be a strong community for students to take part in rather than a group that only screens films. She is currently planning holiday-themed parties and diverse speaker events to provide a platform for students to network with professionals with Disney ties.

The club recently hosted the voices behind the announcements at Disneyland and Disney's California Adventure, Bill Rogers and Camille Dixon. 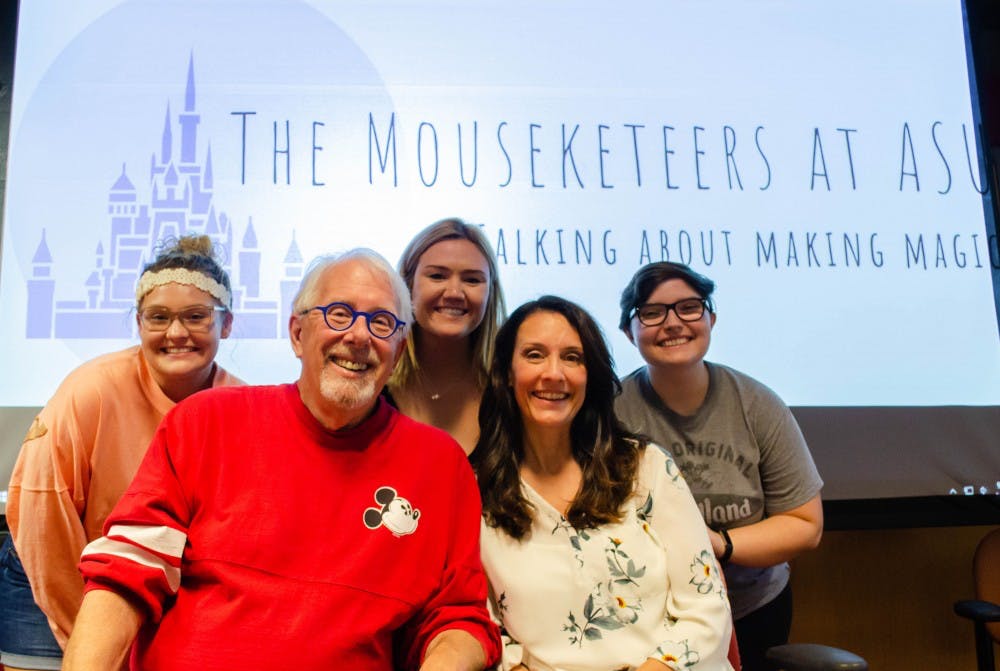 The duo led a conversation about the development of their careers and after the discussion gave students the opportunity to have some of the most-heard voices in the world recorded on their cell phone as a voicemail message.

Tiffany Mink, YouTube personality and owner of the Disney-inspired online store Whosits & Whatsits, is scheduled to be at the next Mouseketeers at ASU club meeting on Oct. 16.

Mink said her first memory of Disney is watching "The Little Mermaid," which was the film that inspired the name for her store. She said Disney's unique ability to tell universal stories is what sets the brand apart.

“As an art form, Disney is so special in resonating with everybody – all ages, races (and) social statuses,” she said. “Every single person can find something that they love about Disney.”

Mink is well-known for Disneybounding, which is when people wear outfits in the color palettes and styles of specific characters.

Disneybounding is a way for older Disney fans to get around the park restrictions which prohibits guests over 14-years-old from dressing as characters.

“It’s so easy to get into with just stuff from your own closet,” she said. “I feel like everybody always has the pieces that will work and it’s just about thinking about your clothes in a different way.”

Mink said the positivity that Disney inspires can be particularly important for students who may be struggling with entering college.

“There’s so many different places you can go within your college experience, and there’s no right or wrong way to do it,” Mink said. “It’s just about figuring yourself out and that self-discovery that Disney really encourages you to explore.”