Sparky's Origins: The search for ... Disney?

"The grapevine": a phrase coined after the telegraph but sounds like it should have been named after the Grecian practice of gossiping in the vineyard. In much the same way, when I heard that the story behind ASU’s beloved mascot was mired in controversy, it inspired a quest to find the writing on the wall. This became my great white whale.

The rumor this time was that the innocuous Sparky the Sun Devil was a scorned man’s retribution for work unfulfilling or talent unrecognized. Upon hearing this, it seemed the grapevine had produced an oh-so-juicy parcel, and it was my duty to deliver the truth of the matter to the masses. There is a bottom to this urban legend, and I had barely begun to scratch at the top.

The only thing I can confirm is that Sparky was originally drawn by former Disney employee Berkeley “Berk” Anthony, but beyond that, the rest of the mascot's history is shrouded in uncertainty.

According to popular rumor, the upbeat devil was meant to be a caricature of Walt Disney. Anthony had supposedly become disgruntled in his time working for Walt Disney Studios. Whether our Sun Devil was created in anger or jest was the rabbit hole between me and this mystery’s wonderland.

Research revealed that this is a road well-traveled, but none had gotten this canary to sing. The path was littered with PR statements that amounted to nothing more than smoke and mirrors. Both Disney and ASU made statements meant only to confuse in an attempt to end the road in an ocean of inconclusiveness.

Legendary former Disney Chief Archivist Dave Smith was asked in a Q&A online if Sparky was, in fact, a satirical cartoon of Walt Disney and replied, "The mascot, Sparky, was designed by former Disney artist, Berkeley “Berk” Anthony. Anthony worked at the Disney Studio from 1935 until he was drafted for World War II in 1941. Some people have speculated that Sparky looks somewhat like Walt Disney, but Anthony never confirmed that."

I could not let the mystery end here, even with word from a Disney legend. I looked elsewhere, and the closest thing available to an ASU statement came in a cryptic online game released online for the University’s 50th anniversary. According to the website, “While many accounts make that claim, there is no evidence to back it up. Sparky was created by artist Berk Anthony. Anthony did work as an artist at Disney Studios in the late 1930s and early 1940s, but was not there when he first designed our playful imp.”

Unhindered, my journey to find out if Sparky was in fact a counterpart to Walt Disney continued. I looked back in The State Press' history, in leather-bound books, covered in dust. I dredged up a piece from ancient history: Feb. 19, 1987. What I found there shook the investigation to its core.

On Oct. 10, 1981, the Tempe Daily News published an article stating that former ASU track coach Donn Kinzle had employed more than just a Disney employee, but Walt Disney himself to design Sparky. 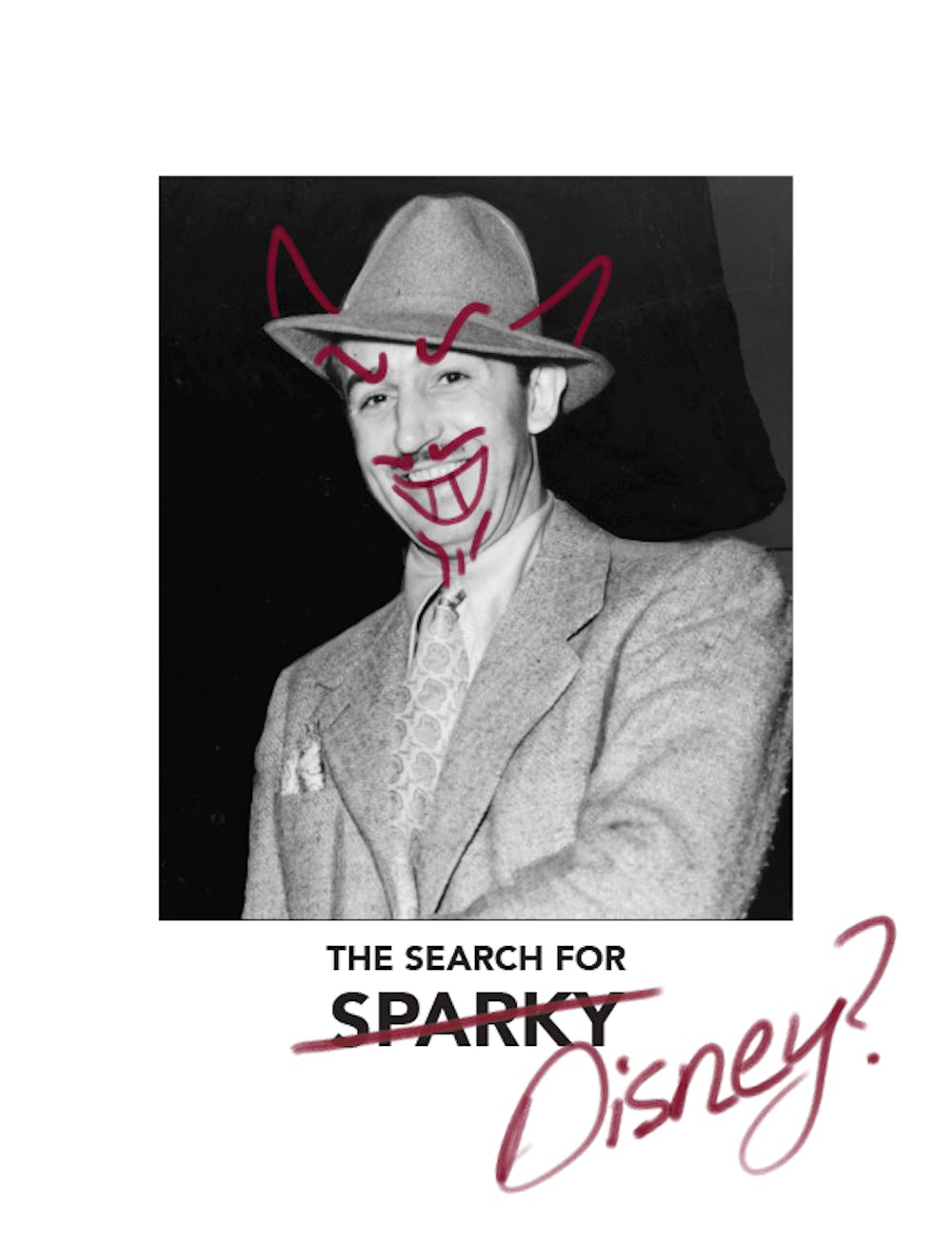 Throwing more fire on this proverbial flame, the writer of this 1987 piece, Carolyn Nelson, cited a 1961 State Press story that said Phoenix attorney Walter E. Craig, who had been Anthony's schoolmate, had been the one to get in contact with Anthony to illustrate what was then called Arizona State College's new mascot.

Perplexed, my gut told me I could trust the word of Dave Smith and The State Press. Especially so because Sparky actually appeared for the first time in The State Press pages all the way back on Sept. 26, 1947, in an advertisement for Bright's Style Shop.

Left maybe worse for wear after only having seen public statements from Disney and ASU's big wigs, I felt I had one boot stuck in the mud. Next, I took to finding an ASU alumnus who might have been around when Berk first sketched our famous Sun Devil in the late 1940s and hoped this branch of the vine would bear a fruit big enough to feed this curious hunger.

I soon came to realize that the alumni from this time period were going to be hard to reach. To have gone to college during the purported date of conception, around 1947, the youngest would be nearing 89 years old. More than that, this must have been a conspiracy played close to the vest, a secret that may not even be real.

The ASU Library Archives were the next stop in this attempt at finding some form of sojourn in the sweet embrace of truth. Oil lamp and matches at the ready, I prepared for a dive into the depths of Hayden Library. Little did I know that the archives had been scattered at the behest of “renovations” to make the library “better.” There was a skunk, and I could smell it from a mile away.

I was at the end of my rope. Not a dime to my name and my deadline was fast approaching — if I didn’t produce something this time, the boss would kick me to the curb. I turned to the only truth I have ever known: the internet.

To leave no stone unturned, I scoured the very crevices of the internet from backwards forums to underground message boards. What I saw there changed me, but it did not illuminate the truth. Some form of salvation came in the last place I would ever expect to look: Wikipedia. This haphazard source turned out to be the only duck that would quack.

In March of 2013, the Walt Disney Company conspicuously signed on to redesign our sunburned imp — innocent enough until one begins to digest their potential motives. This couldn't have been a cash grab, as Disney owns everything except Nintendo at this point. It could have been an attempt to gain more support in Arizona, but people already watch more than enough TV since it is 120 degrees out for at least six months of the year.

The only logical motivation I could deduce was that in the old design, there was something Disney wanted to hide – something about Sparky bothered the company, and it was not his three-pronged pitchfork.

The design was quickly scrapped after its inception because fans felt it was too cartoonish, and, as they say, “ball don’t lie.” Though this insider scoop could barely fill a cake cone, let me add some toppings, on the house.

If things were simple, this is how I believe they would have gone down. The following will be based on a mixture of conjecture, history and a little elbow grease. Here's what I speculate really happened ...

Berkeley Anthony began working for Disney as an assistant to Ward Kimball around the time “Pinocchio” was beginning production in 1937. Anthony was a young, creative man, with intelligence to boot. More than working with Kimball on “Pinocchio,” Anthony also assisted him with his work on “Fantasia.” Both films were released in 1940, which was also around the time the young assistant got drafted into World War II.

WWII was a sticky affair that could jade any man, even enough to slander a boss whom he never really talked to. There is not a much better way to be memorable than to be perplexing, and every time someone makes a connection between Sparky’s moustache and the dude who drew Mickey Mouse, Jesus probably gives Anthony a high-five.

During his stint with Disney, Anthony likely experienced one of three things that could have led to him creating the bedeviled parody of Mr. Disney. Possibly, Disney was just a harsh boss. Some sources report him as being unforgiving towards any employee who was even slightly unappreciative.

Another possibility is that, growing up during the Depression, Anthony wanted to poke fun at the rich and powerful to compensate for his own humble beginnings.

The happier horn of the three is that Anthony actually liked Disney so much he wanted him to live in the burning Arizona sun forever.

Though my harpoon did not land in the belly of truth, it may be better this way. The mystery lives on for another detective to stumble through, and maybe, just maybe, the technology of the future will give that young spud enough of a leg up in this cruel world to find out who Sparky really is. Maybe Sparky is all of us, and the only way to find him is to find ourselves.

Whatever the case may be, Anthony returned from war and penned a logo for ASU that has lived on for the better half of 100 years. Disney should be proud to be our Sun Devil, and I hope Anthony is up there somewhere smiling, the truth forever hidden in Sparky's impish grin.

If you have any definitive evidence on this evolving case please contact statepressmag@gmail.com