ASU alumnus releases comic book: 'The Spirit of the Shadows'

On the first day of sixth grade, Daniel Ziegler’s mom alleviated his nerves by pointing to a little boy wearing a Spiderman backpack.

“You’re going to be friends with him,” he recalled her saying.

Thirteen years later, Ziegler and Nick Cagnetti, the comic-book-loving boy in the Spiderman backpack, released their own graphic novel together.

“The Spirit of the Shadows” follows the story of a musician hopelessly in love with a girl he knows he will never have a chance with. When he is killed and brought back to life as a monster, more adventures ensue as he tries to get his old life back.

Five years in the making, the comic was officially released on Oct. 25, 2018.

While it is currently only available for purchase on their website Radical Realm Comics, Ziegler and Cagnetti hope to see it on the shelves of local comic book stores soon.

“It was written as a love letter to classic horror,” Ziegler said. “It's my way of taking little bits of everything that I love and putting them together and making something new out of it.” 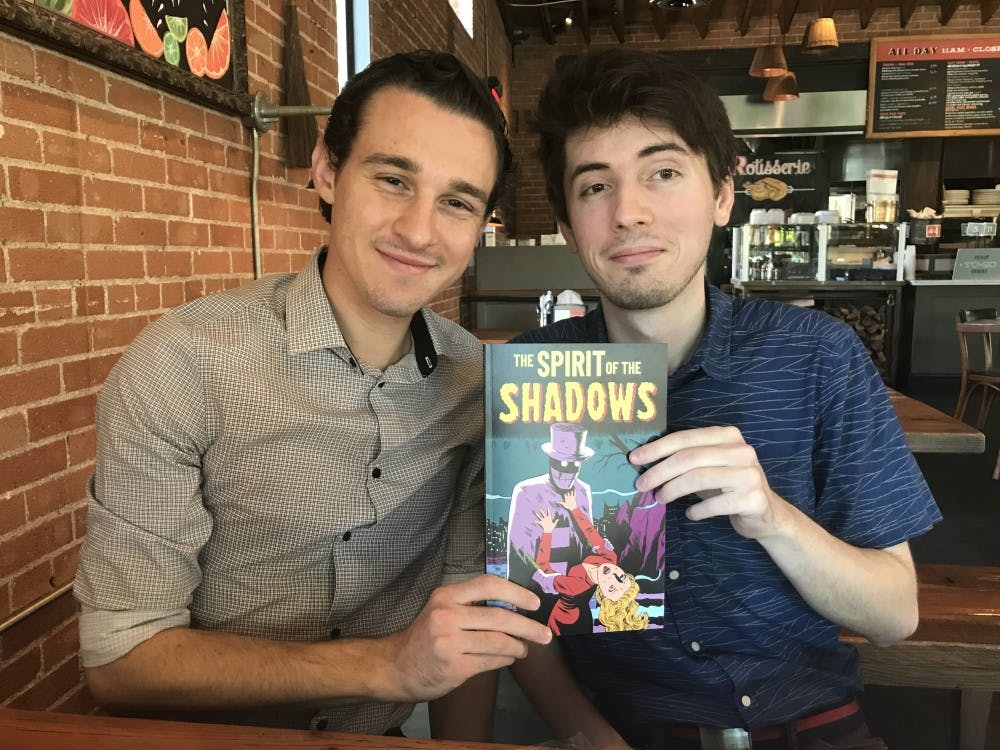 MacKinley Lutes-Adlhoch
ASU alumnus Nick Cagnetti and Daniel Ziegler show off their comic-book “The Spirit of the Shadows” while at the Phoenix Public Market, in Phoenix, Arizona on Oct. 30, 2018.

“We've done stuff together for as long as we've known each other,” Ziegler said. “We've always been very creative, and we've tried to give each other creative outlets.”

The book originally started as a short film screenplay that Ziegler wrote. After making it into a short film, they drew up a comic version and released it online for anyone to read, but decided a tangible book was the best final form for this story to take.

Since the launch, they said the comic book has garnered interest from around the globe.

“We've been pretty amazed at the interest so far and just look forward to seeing what more we can do,” Ziegler said. “It's all about just making people happy, giving them something that they really enjoy and that they can feel that speaks to them.”

So far, the duo has seen a reader dress up as the main character for Halloween and have received a fan art sketch on Instagram from a reader in Italy.

Was blown away when I first saw this Spirit of The Shadows costume by @umbrellabones2099 ! Seriously cool stuff, man! Love the violin, too. #HappyHalloween

“There's an audience for everything,” Cagnetti said. “And it's nice that it feels like we're finally starting to reach some of that audience for this book in particular.”

Cagnetti said that Melissa Button, a lecturer in painting and drawing and the advisor for his capstone project at ASU, pushed him in his comic endeavors while he was still in college.

Button said Cagnetti had a lot of passion for graphic novels, something that she said cannot really be taught.

“When a student comes to you, and they have that, and they're really good at it, and because they're passionate about, it they invest all of themselves into it, the quality usually rises because of that,” she said.

Cagnetti said a lot of people in the art school didn’t seem very receptive to him wanting to work on comics, but Button was always there to critique his work and keep him going.

“I didn't put up any barriers to him,” she said. “I definitely encouraged and gave him the space and time to continue working on these things.”

Cagnetti will be back to ASU to speak to a class of freshmen studying arts on Nov. 26 from 6:05 to 7:30 p.m., and Button said anyone is welcome to come listen.

Cagnetti said studying intermedia at ASU gave him a great advantage when it came to working on the book. Being able to use and learn from a variety of different mediums, he said, allowed him to experiment more with how he could best utilize the comic book medium to tell their story.

Ziegler, who is primarily a filmmaker, said he appreciates comics because imagination is the only limit on what can make it to print.

Although the developmental chapter is closed on “The Spirit of the Shadows,” Cagnetti and Ziegler hope this project only leads to more opportunities in the future.

“The work is done on this one, but hopefully it leads to more work,” Ziegler said. “And that's the way it goes for everything we do.”