Students use recycled maps to create pieces of multimedia art

The ASU Library Map and Geospatial Hub is celebrating the fifth anniversary of its Creative Cartography series which was sparked by an excess of old maps.

“We had the same map in five, six, seven copies so we decided to get rid of some of them and I couldn’t get rid of them because no one else wanted them,” Wilhelm said.

She said her first thought was to email the entire art department at ASU. Wilhelm said she got a reply from the Herberger Institute professor Ellen Meissinger who wanted so many maps she asked if she could bring a cart.

“I started bringing my students from the art on paper class over to get maps from the collection and then that spearheaded into the first show," Meissinger said. "We went from there and we’ve been doing it ever since."

The Creative Cartography exhibits, which are on display annually in the fall semester, have explored a variety of themes including Memories and Movement, Order and Chaos, Through Space and Time, Point of View and this year's topic Place and Space.

“It’s different every year,” Wilhelm said. “We were saying this year it seems to be more colorful.”

Several computers are set up as a part of the exhibit displaying past works so audience members can view the project from its earliest days.

This year’s theme explores how one’s interactions with others and their environment have impacted who they are. Works have varied in mediums ranging from watercolor to 3D pieces and the Place and Space exhibit features mediums from black marker to acetate, with only maps as the common ground.

Jordan Litzinger, a senior majoring in art with a focus in drawing, said students appreciate the openness of the prompt and use it as a platform to express themselves.

Litzinger said she answered the prompt “What am I to the universe?” with her piece titled “Framework” in which she used pen, water, graphite, charcoal and thread to encompass the complex answer and what it means to her.

“I feel like art just became a way for me to express myself and explore those questions,” she said. “I was trying to represent sort of nebulous colors and features and put them in this weird vortex room.”

Litzinger has two art pieces displayed in the Exhibit. She said her other art piece titled “Sandstone” reflects her admiration for the grit that is native to the Southwest.

This exhibit is the first time she has participated in an art show on campus and she said she is excited to show her work alongside her classmates. 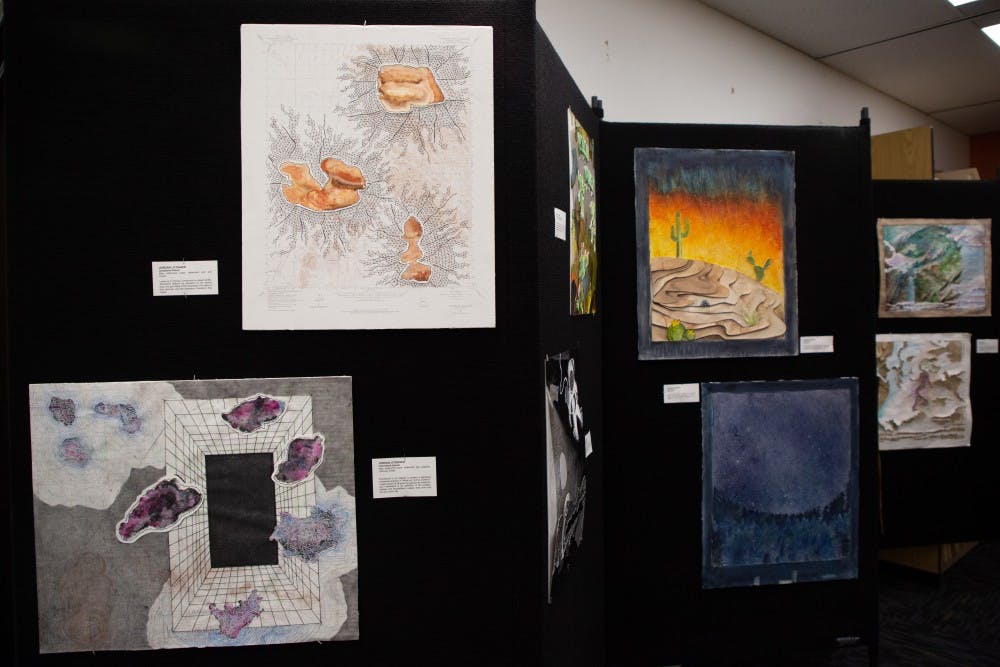 Some of the artwork presented in Art of Paper Class Exhibition is presented in Noble Library in Tempe, Arizona, on Wednesday, Nov. 14, 2018.

"I really like how different everyone's pieces are," Litzinger said. "I think it just says a lot about artists and students."

This year the exhibit is being hosted in the Geospatial Hub on the 3rd floor of Noble Library, but the collaboration is expected to continue well into the future and the exhibit space will shift.

“In about a year we’re going to be in the newly remodeled Hayden Library," she said. "It’ll be a much smaller space, but we’re trying to figure it out."

Meissinger said they plan to continue the collaboration because using maps is a fun and creative medium for students to explore new themes each year.

“It’s a great challenge for the students," Meissinger said. "They really like working on the maps."

Place and Space is on view from Nov. 7 to 26 and is open to the public.