The independence of college presents an array of perks. But being away from the comforts of home while feeling under the weather is not one of them.

Rabbi Shmuel Tiechtel of Rohr Chabad at ASU said he has something to help: traditional chicken and matzo ball soup.

“I’ve heard scientific studies about the impact of chicken soup, but I think it is just Jewish Penicillin,” the rabbi said. “Chicken soup is something your mom or grandma made when you were feeling sick — it is warm and it feels like home.”

Shortly after opening Chabad at ASU 15 years ago, Shmuel Tiechtel and his wife, Chana Tiechtel, started a program to bring this feeling of home straight to students' doorsteps no matter how far they are from home.

Members of the Chabad families and student ambassadors deliver free homemade chicken soup made using their family recipe and a care package with tissues and tea to ailing students on ASU’s Tempe campus.

“We came here 15 years ago with the inspiration of the Lubavitcher Rebbe as part of the Chabad organization, which centers on love, caring, education for all and inspiring people to pay it forward,” Shmuel Tiechtel said. “We do it because we care and we hope it inspires others to pay it forward too.”

You don’t have to be Jewish to experience the community at Chabad or receive chicken soup, Shmuel Tiechtel said.

Orders for the soup come in at all hours of the day for anything from a broken bone to the flu, he said.

“We get requests from across the country and from parents, students and friends,” he said.

With fall and finals fast approaching, the rabbi and his wife have to plan ahead for a busy week of deliveries.

“It definitely depends on the season, but I would say we typically make around 10 deliveries each week,” Shmuel Tiechtel said. “We make a big portion of chicken soup and then make deliveries throughout the week — we already have made four deliveries this week and it is only Tuesday.”

Cam Robinson, a sophomore studying sports and media studies, was brought chicken soup without even knowing about the service.

Feeling sick, Robinson had to cancel plans with Rabbi Mendy Rimler, outreach director and one of the rabbis for Chabad. Later the same afternoon, Robinson received a text message from Rimler to notify him he was on his way with some fresh chicken soup to help him feel better. 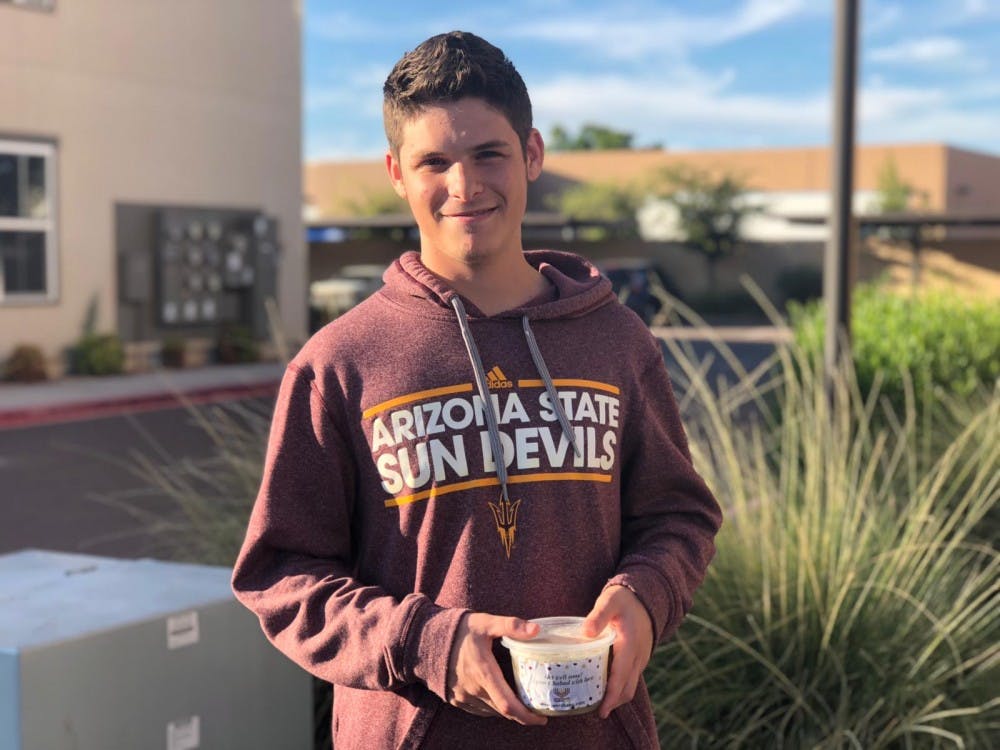 ASU sophomore Cameron Robinson poses for a photo with his chicken soup delivered by Rabbi Mendy Rimler outside of his dorm at in Tempe, Arizona, on Sunday, October 21, 2018.

“It completely caught me off guard because it is so kind,” Robinson said. “It might seem like something small, but the generosity of going out of his way to do something to make me feel better made me feel so good.”

The extra effort to show he cared was a testament to the type of person Rimler is, Robinson said.

“He’s a Chabad rabbi, but really he just cares about students,” Robinson said. “He didn’t have to go out of his way to get me soup or even make me soup, but the fact that he went out of his way to bring it to me shows he has compassion for students.”

Shmuel Tiechtel said as more parents and students become aware of the service, the demand grows.

Parents will order the soup for their child and then the student will end up requesting it for their roommate or a friend in when they get sick.

It all boils down to the idea that “good has an amazing chain effect,” he said.

In the requests, they receive messages of gratitude where parents often express how thankful they are to know someone is caring for their child.

“We have a son studying out of town, so I understand what it is like to be away from your child — it makes me feel so good to know someone will take care of him and we want people to feel the same way about us for their children here.”

While Chana and Shmuel Tiechtel said more student ambassadors will help them “deliver on our commitment” as more requests are sent in, the opportunity is a blessing.

“People cure other people, it is just what we do,” Shmuel Tiechtel said. “Everyone should do what they can to show they care about others.”

Clarification: Graphs six and 17 have been updated to better reflect the intent of the speaker.