Movies and Munchies: 'Julie and Julia'

Whether you’re trying to inspire yourself to cook a Thanksgiving feast, escape from the stress of the impending holiday season or you just need something to watch to avoid family in town, “Julie and Julia” has your back.

The 2009 comedy was based on a book of the same name written by Julie Powell and published in 2005. It follows Julie, a married woman feeling a little lost, as she cooks her way through the 524 recipes in Julia Child’s seminal cookbook in a year.

With a 76 percent on Rotten Tomatoes and a new home on Netflix, it’s a charming portrayal of two real-life stories that perfectly pairs with pumpkin cupcakes for much needed relaxation time this Thanksgiving. 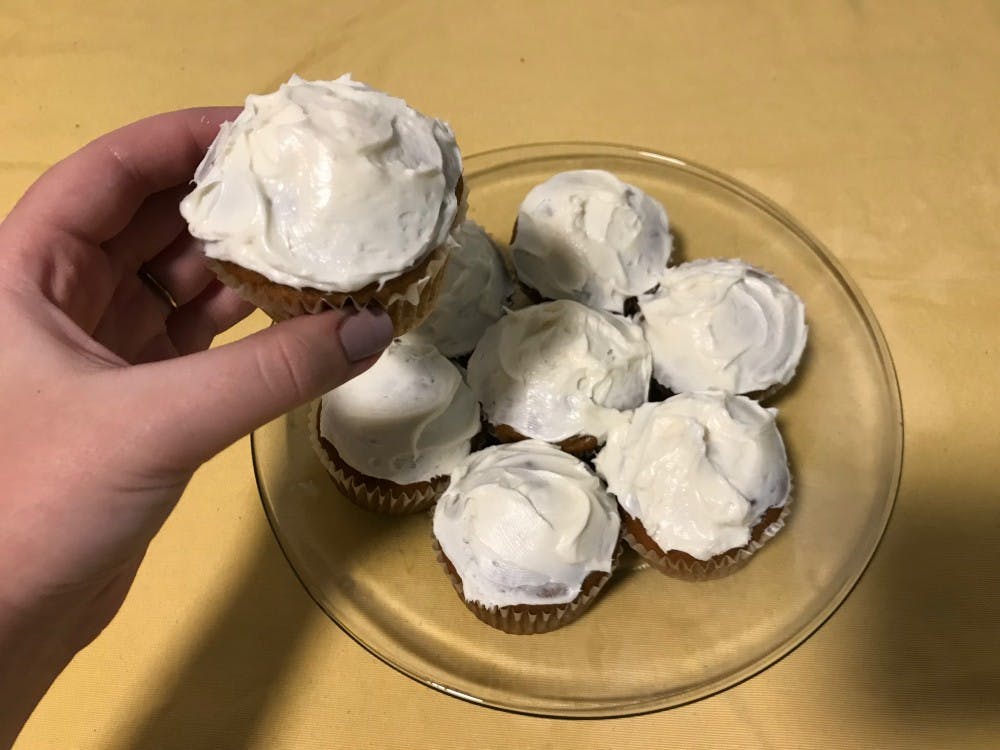 Bake the cupcakes for about 25 minutes and check on them periodically. Add more time if needed. They’ll be done when a toothpick can be inserted in the center of the cupcake and it comes out clean. Frost as desired — they taste best with cream cheese frosting.

What more is there to be said about how wonderful Meryl Streep is? Streep's Julia Child is the most charming, watchable character in the movie. She captures Julia’s warm spirit in a way that will have you wondering: Is Meryl Streep actually Julia Child?

Amy Adams plays Julie Powell, and while the audience doesn’t know the real Julie Powell well enough to have a personality reference, she plays the high-strung, lost-in-life part well.

Stanley Tucci as Julia’s husband and Chris Messina as Julie’s husband are great secondary characters, and they bring needed dimension and balance to the story.

The style of the film presents both storylines — Julie’s and Julia’s — as if they’re happening at once. The story flips back and forth from 1940’s French cooking classes to a stuffy apartment in Queens. Surprisingly, the two timelines are written together really well.

Julie’s and Julia’s stories mirror each other in many ways, and the film intertwines these narratives seamlessly. The movie is a little long, lasting over two hours, but overall the story has good pacing that doesn’t make it feel tiring to watch.

“Julie and Julia” definitely isn’t known for its soundtrack. Mostly composed of sweet background music, few songs in the soundtrack stand out or seem to add much to the scene.

However, Talking Heads’ “Psycho Killer” is able to break through the other more standard songs when made the backdrop to Julie’s lobster cooking scene. The beat and words perfectly blend on screen with her fears about being a lobster killer. Aside from this song though, the music in the film isn’t very memorable.

A classic mid-life crisis story never really goes out of style. With two stories to follow along, any viewer can find something to relate to in either of the protagonists' lives.

As Thanksgiving approaches, movies that celebrate food and the way it brings people together feel more relevant than ever. It’s an airy film that can be watched year-round — it doesn’t have any specific relevance to any time period — but it’s a perfect film for this time of the year.

"Julie and Julia" and pumpkin cupcakes are a cozy combination. A fun-to-watch cast, a well executed dual storyline and a relatable plot make it a great choice for getting some cooking inspiration or escaping the madness of the holidays. Plus, it has Meryl Streep — what more could you want?