Missing letters: ASU's multicultural Greeks struggle to find a home in the GLV

"Though we are small, we want to be represented"

The new Greek Leadership Village strives to give Greek chapters at ASU the opportunity to establish a positive presence on-campus but has left some chapters out of the picture.

Several cultural-based fraternity and sorority chapters have reported not living in the new village on Tempe campus. Many once resided in the Cholla Apartments, student housing demolished to make way for the GLV.

They now say they were unable to live in the GLV because of the membership requirements and financial model that the University maintains is necessary to keep the new village operational.

Jalen Porter, a senior triple majoring in philosophy, political science and justice studies, is a member of ASU's chapter of Phi Beta Sigma, a historically African-American fraternity with 14 active members.

He said he feels unrepresented at the GLV because his fraternity does not fulfill the membership number requirement for residence at the facility.

“The policies didn’t take us into account," Porter said. "We are the first black fraternity to win the President’s Cup award, and it doesn’t make sense that we won this two years in a row and we still can’t live at Greek Village.”

Phi Beta Sigma is far from alone. None of the chapters in the three overarching multicultural Greek councils — Multicultural Greek Council, National Association of Latino Fraternal Organizations Council and the National Pan-Hellenic Council — were able to live in GLV.

At the semesterly Greek Open House in August 2018, several NPHC chapters decided to protest their exclusion from GLV by not participating in the strolling tradition.

“We were being forced to participate at this event and did not want to be unprofessional by not showing up, so we chose not to stroll to protest not being able to live at GLV, and we did not want to be the pony for ASU,” said Tyler Cowan, a senior majoring in psychology and the community service chair for the NPHC council.

The University said the fact that multicultural chapters were unable to live in the GLV is a bug, not a feature, of the facility's pricing model, and that it will work to make the necessary changes by fall 2019.

However, multicultural chapters said they still feel excluded due to confusing standards and the complicated bureaucracy of Greek life at one of the country's largest universities.

Many of the multicultural fraternities and sororities are too small to meet the requirements for chapters to live in the GLV, which include meeting financial obligations and fully occupying the intended town homes.

#sororitylife #sigmakappaasu Some photos on the way out at end of initial install!

The total number of active members in a sorority or fraternity must be at least double the number of beds in the chapter's desired house size.

Therefore, for a Greek organization to live in the GLV, they must have a minimum of 38 people in their fraternity or sorority and have at least 19 people willing to fully occupy one town home.

The maximum occupancy clause was developed as part of the GLV's financial model, which requires chapters to fully occupy their home through a four-year lease agreement, Gary Ballinger, the director of Fraternity & Sorority Life, said in an email.

If chapters are below the occupancy requirement, they can go through the appeal process as laid out in the GLV eligibility requirements.

"Chapters that do not have two times the maximum occupancy of the facility may still apply to license a facility," the requirements state. "However, the chapter must be able to demonstrate how they will be able to ensure that occupancy of the facility is met for the full duration of the (residency agreement) and provide a financial plan for how the chapter will meet the financial obligations of the ... agreement."

No chapters have filed such applications, Ballinger said.

ASU President Michael Crow explained that the University did not expect this problem to occur due to its financial model and is currently focused on fixing it by fall 2019.

“We have a shortage of on-campus living spaces where the demand is exceeding supply," Crow said.

With the high demand for on-campus living, Crow recognizes there may be other solutions to make the GLV more inclusive.

"We may change the financial model now; however, there are other students currently living there, and so we'll use this space accordingly,” Crow said.

The project began with the Interfraternity Council housing proposal in fall 2012, followed by the 2015 housing resolution. ASU funded the $75 million GLV in partnership with American Campus Communities, which is managing the complex.

“ASU housing rates are the same in the chapter houses, the differences are just in terms of single or double rooms,” Ballinger said in an email.

For the academic year, the pricing for each resident starts at $7,900 for double rooms and $8,300 for single rooms.

At the end of the day, inclusion is what we want as multicultural orgs. We want to be included in these convos and in reality, nobody thinks about us and we get walked on, regardless of the amount of work we actually put in for being so small.

Saulo Corona, a senior majoring in biomedical sciences, is the treasurer for ASU's chapter of Omega Delta Phi, which has eight active members.

Corona's chapter is culturally based but falls under the jurisdiction of the IFC.

Because of the requirements and financial restrictions of living at Greek housing, the chapter was unable to live in GLV and unable to afford residences in Vista Del Sol and the Adelphi I Commons, which now houses smaller chapters, including cultural and professional chapters.

"The purpose of GLV is for all Greeks to come together and share common space, (but) I feel the price is not inclusive," Corona said.

A lot of confusion surrounds the pricing of the GLV. In Adelphi Commons — which previously housed sororities, the rates for double rooms are about $1,000 less per year than in the GLV. Single room rates in Adelphi are equivalent to those in the GLV.

Cowan, of Phi Beta Sigma, said there was a misunderstanding regarding the price of living at the GLV because it wasn’t officially discussed among chapters, and they initially thought it would be out of the fraternity's price range.

Briana Diaz, a senior double majoring in global health and the science of healthcare delivery, is the president of the Multicultural Greek Council and the former vice president of internal affairs for MGC with a focus on Greek unity.

“I think they had the best intentions to include the cultural Greeks, but it just comes down to the funding they had for structuring the buildings leading to a high cost," Diaz said. 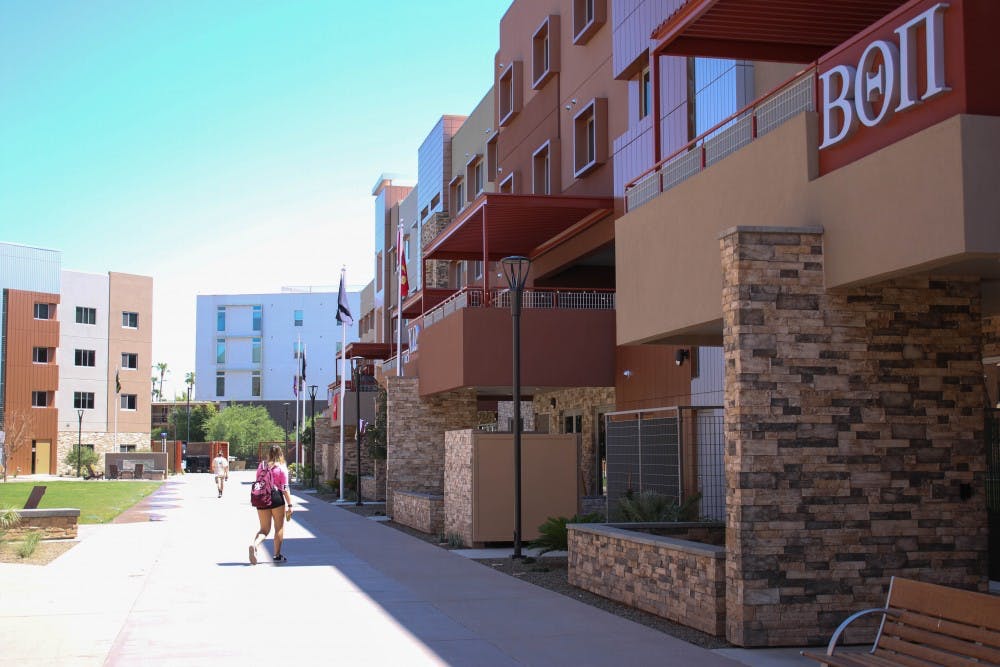 Multicultural chapters do have some access to the GLV through the complex's community center, which has facilities open to anyone in a Greek chapter. All Greek councils, including the cultural-based councils with no chapters living in the GLV, have their own suites in the conference area where meetings and events can be held.

But still, members of multicultural Greek life worry about a lack of inclusion.

"I feel a lot of councils are unfamiliar with each other and not being in GLV makes us even more separate, and people (are) unaware, so many people don't know we exist," said Kathryn Penunuri, a sophomore majoring in secondary educational biological studies and a member of ASU's chapter of Lambda Sigma Gamma Sorority, an MGC chapter.

Corona, of Omega Delta Phi, said the University does not give multicultural chapters necessary support.

"So many smaller multi-cultural organizations are trying to change the negative stereotypes of Greek chapters, but I feel ASU is not giving us the support that we need," Corona said.

Diaz, the MGC president, is a member of Sigma Lambda Gamma, one of the many cultural Greek chapters that was ineligible to live in the GLV due to the maximum occupancy requirement.

"I want to shape what is best for MGC membership and the organization so that we have more of a voice on campus,” Diaz said.

As the commissioner of multiculturalism for Lambda Sigma Gamma, Penunuri said she focuses on increasing diversity and cultural awareness in her chapter, which has 16 members.

“Though we are small, we want to be represented," Penunuri said.

Penunuri said the lack of cultural chapters in the GLV means that multicultural Greeks get less recognition as a whole.

“The Greek chapters in GLV have their letters on their town homes, and our letters aren't represented anywhere,” Penunuri said. 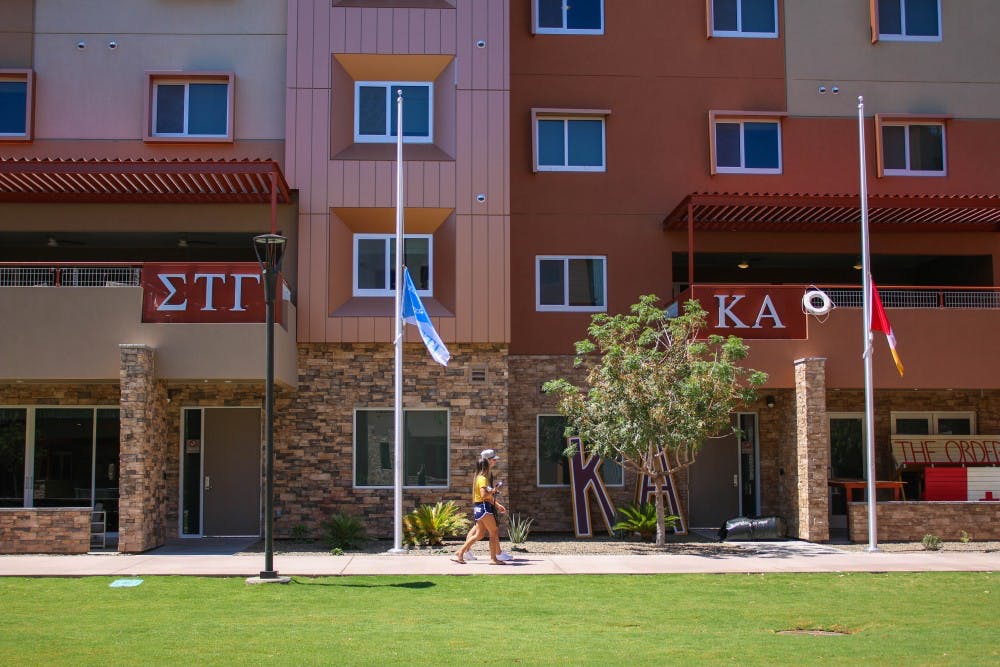 According to Gina Cowart, the vice president of branding and marketing and communications strategy for American Campus Communities, the University is focusing on “keeping the Greek community tied into the mission of the University to have support and be on-campus.”

ASU Fraternity & Sorority Life, the advising body for all Greek governing councils, has been in communication with all Greek councils at the University since last year about how the space and suites can be used, including the qualifications and requirements for living at the village, Diaz said.

“ASU prides itself on its inclusiveness and diverse student body," Ballinger said. "We want to emphasize that every member of the Fraternity & Sorority Life community is welcome at (the Greek Leadership Village Community Center)."

Ballinger encourages all Greek students and organizations with concerns to contact FSL to ensure a positive Greek life experience.

"We invite and encourage any student and/or organization who has any concerns to contact Fraternity and Sorority Life staff so we can ensure that they have a positive campus and Greek life experience," an ASU Media Relations official said in an email statement.

“The fairness to multicultural groups is important,” Rund said. “For students living in GLV right now, on-campus housing is less a part of their history, culture and their experience than it is in the case of many others, so part of the dialogue is explaining why we think that aspect is beneficial to all groups.”

While the University plans to address this issue of inclusion, multicultural Greek students continue to focus on the bigger picture of community.

"It's not about how many people we have in our organization," Penunuri said. "It's about making an impact in our community, and it seems it is not reciprocated by the University sometimes."