SCETL says it's a place for diverse opinions. Whose voices are included?

ASU’s School of Civic and Economic Thought and Leadership was founded, according to its mission statement, to address what it sees as a fundamental problem: that American universities “live in an atmosphere of a certain conformity of opinion and suffer from an obvious lack of debate.”

Since its arrival on campus, the school has generated its own debate — one centered around whose voices the school includes, and for what purpose. Critics call the school ideological, pointing to funding it has received from the Republican-majority state legislature and the two research centers it houses that are backed by the Charles Koch Foundation. The school, for its part, says it is academic, not partisan.

Meanwhile, SCETL has rolled out a host of new courses and began officially offering a major and a minor in civic and economic thought and leadership. The school has also poured time and resources into its public affairs program, a series of lectures, panels and conferences framed around civic engagement.

The majority of speakers who have participated in the public affairs program, however, are men. While the underrepresentation of women on panels and in speaker roles is a global phenomenon, SCETL boasts that its series values diversity and inclusion.

“No other university or college in America rivals the caliber of the ASU and SCETL effort to convene leading experts on free speech, and leaders in American civic life, to explore the debates and heated clashes currently roiling higher education about freedom of speech, civility, intellectual diversity and inclusion,” the school notes in its annual report given to the Arizona State Legislature in October.

Last year, the school’s public affairs program revolved around the theme “Free Speech and Intellectual Diversity in Higher Education and American Society.” The series was co-sponsored by the Walter Cronkite School of Journalism and Mass Communication and the Sandra Day O’Connor College of Law, and it was recorded and distributed by Arizona PBS.

#BigFail when @asu organizes a conference on intellectual #diversity with all but one #white speakers and only a 1/4 female. SCETL @Cronkite_ASU, & @ASUCollegeOfLaw need to realize that the future is colored and female! #academiatoowhite @statepress pic.twitter.com/IUnuKcBXZN

According to the legislative report, last year’s series included 14 speakers at eight events. Around 29 percent of those speakers were women. At SCETL’s spring conference, titled “Free Speech and Intellectual Diversity in Higher Education: Implications for American Society,” there were 27 speakers and around 26 percent were women.

Carol McNamara, a senior lecturer and the school’s associate director for public programs, said the school was aware of the importance of bringing speakers with diverse perspectives to campus and that it was not intentional that the majority of speakers the school had brought to campus last year were men.

“We want to bring every perspective to campus that we can, and we want to bring the speakers who address those issues, and we try very much to be aware of who’s out there and who can come to speak on different issues," she said. "So it just so happened, in a way."

This year, the school’s spring conference is titled “Polarization and Civil Disagreement: Confronting America’s Civic Crisis.” Among its speakers are scholars from organizations like the Brookings Institution and the American Enterprise Institute, universities such as Harvard, Princeton and Oxford, and news outlets like The Washington Post, The Nation and The Weekly Standard. Of its 24 speakers, around 21 percent are women.

And of the speakers featured in other past or planned events so far this school year, around 25 percent were women, according to a State Press analysis of event information posted on the school’s website.

A recent school event, which took place November 13, featured two female political analysts, Margie Omero and Kristen Soltis Anderson, who discussed the results of the midterm elections. One of the topics they discussed, according to an ASU Now summary of the event, was the representation of women in politics.

In a written statement, Paul Carrese, SCETL’s director, highlighted that event and said the representation of women was one of many factors the school considers in choosing speakers.

“Our school has been praised, publicly and privately, by a wide range of university and community voices for the high-caliber of speakers and discussion our public programs contribute, and we are excited to continue that excellent work,” he wrote. “We would be interested to learn of another academic unit at ASU that is doing as much to bring a diversity of views into public discussion on important academic and civic issues.”

Because SCETL’s public affairs program is distinct, it’s hard to compare directly with other programs at ASU. The Cronkite School also has a speaker series called “Must See Mondays,” though it’s mostly directed at students. Of the speakers listed in the school’s Must See Monday lineup this semester, around 50 percent were women.

“My goal is always to find the best speaker on a topic. And I look for men and women who have ... the most important things to say about the issues,”  McNamara said. “We’re just barely into this.”

President Michael Crow has pledged $300,000 of additional funding each year to support SCETL’s public affairs program, according to the annual report to the legislature.

Fall of this year marked the first semester students could declare a major or minor in civic and economic thought and leadership, the school's official academic program. As of Oct. 30, 14 students have declared majors and 19 have declared minors, according to Ty Fishkind, a SCETL spokesperson.

Fishkind wrote in an email that these enrollment numbers are comparable with other new programs at ASU —  enrollment starts small and then gradually increases.

Over the past three semesters, 132 students have enrolled in SCETL courses, according to an ASU spokesperson. This semester, the school offered 14 courses, up from 10 last spring and four last fall.

Within these courses, however, critics have alleged that a Western-centric approach to scholarship excludes certain important voices, particularly those of women and people of color. Carrese said in March that the introduction of the “Women in Political Thought and Leadership” course was in part a response to criticism that the school needed to diversify its curriculum.

This is the first semester students can take that class, which McNamara teaches. On a Thursday morning in late October, seven students — six women and one man — sat in the class to discuss John Stuart Mill, Plato and Mary Wollstonecraft, focusing on the historical role of women in the family and society, a topic that their syllabus calls “a persistent and foundational theme in the history of political thought.”

Jessica Baez, a student in the class and a junior majoring in civic and economic thought and leadership, said the class had opened her eyes and helped her think differently about women in foundational texts. She said majoring in the school had exposed her to diverse perspectives through discussions both inside and outside the classroom.

Questions of diversity are also relevant to the school's hiring, which it is boosting to support its expanding academic program. SCETL has hired 11 faculty members since September 2017, according to the October report to the legislature.

The report notes that the school has ongoing searches for three tenure-track faculty: a director of the Center for Political Thought and Leadership (one of the research centers funded by the Koch Foundation), a director of graduate programs and a civic education professor.

To hire faculty members, SCETL looked for scholars both within ASU and at other institutions. Fishkind said in an email that boosting faculty diversity was a priority for the school.

“SCETL is fully engaged with the University’s commitment to diversity in hiring, and views diversity of viewpoint, diversity of experience and diversity of ideology as key components in its mission to bring together people with distinct opinions to engage in civil dialogue,” she wrote.

As it stands, three of 11 hired faculty members within SCETL— about 27 percent—are female, according to the report to the legislature. Two of those three faculty members are currently at the school, while one is completing a post-doctoral fellowship at Princeton and will be on campus in August 2019.

Comparatively, the School of Historical, Philosophical and Religious Studies has a faculty that is 39 percent women — broken down by department, women make up about 43 percent of history faculty, 29 percent of philosophy faculty and 33 percent of religious studies faculty, according to a State Press analysis of faculty directories in early November.

Faculty in the School of Politics and Global Studies is about 40 percent women. At ASU overall, 45 percent of faculty members were women in fall 2017, according to the University’s most recent statistics. 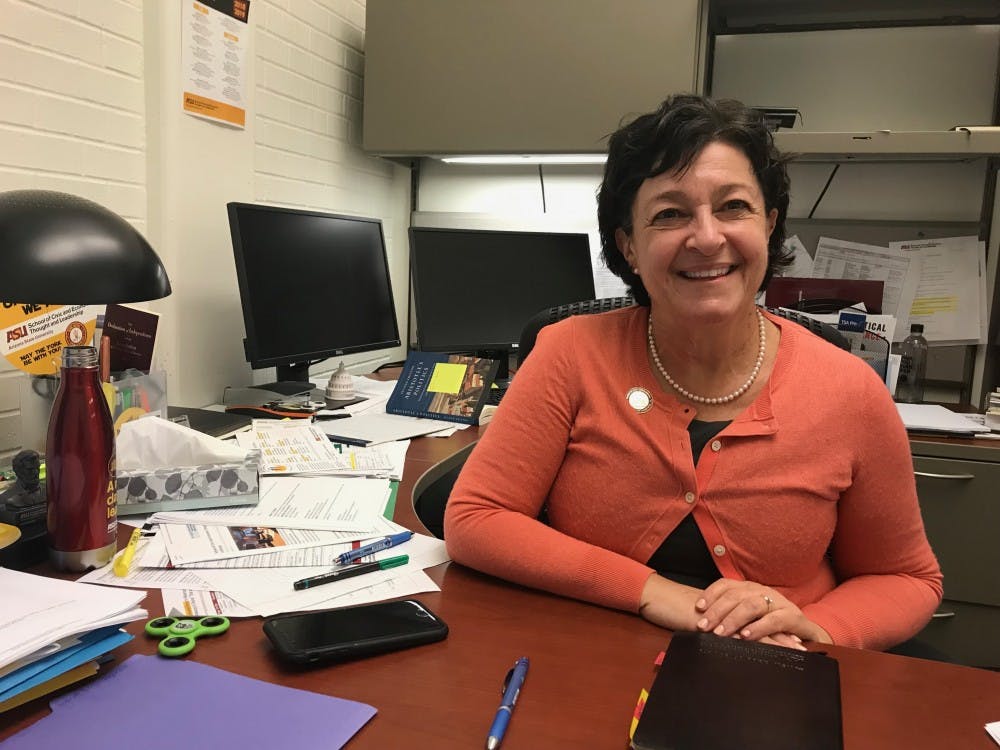 McNamara, one of the three female faculty members in SCETL, said that the school has two main priorities with hiring: recruiting the best scholars and pursuing diverse perspectives.

Diversity of viewpoints continues to be a persistent theme in SCETL’s events. McNamara said SCETL's "goal is to be a part of a discussion that invites everyone to the table."

But research has shown that if someone sees another person who looks like them at that table, they'll be more likely to pull up a chair.

In a 2014 paper on achieving gender balance among conference speakers in scientific contexts, Jennifer Martin, an Australian professor, argued that refusing to address gender balance in speaker programs has the effect of "normali(zing) a gendered stereotype of scientific leadership." Similar dynamics have been shown to exist in politics, philosophy, computer science and many other fields.

Martin and other researchers have also found that a lack of diversity in speaker programs can be a self-reinforcing cycle. This is because even just being invited to a program raises an individual's profile, making them more likely to be invited to other events in the future.

"By extending more invitations to women and other under-represented sections of the academic community, we provide a boost to their visibility and their track record," she writes. "This will help them to progress by raising their national and international profile and help support their applications for grants, academic positions, and fellowships."