ASU has a mass assemblage of 1.6 million books on the Polytechnic campus

Like something out of a sci-fi novel, Arizona State University's High Density Collection holds within its bunkers 1.6 million books.

To call it a labyrinth, like the door factory in Monsters Inc. or a football field full of books, doesn't completely capture this ice-cold collection facility. Rather, it's as if the Room of Requirement in Harry Potter was made to hold 6 million books, meticulously sorted into fastidious shelves.

Imagine a room with five corridors. As you walk down each, you are surrounded by towering book shelves 30 feet tall. The corridors are about as deep as two Walmart aisles, halfway up to the roof. The shelves are different sizes with little cardboard containers holding a variety of books.

That room, known as the HDC, is as of now not even close to full, and there are two others exactly like it just waiting to be filled with the collective, physically concrete, knowledge of ASU.

The HDC facility on the Polytechnic campus is home to books from all seven libraries across the University's four campuses.

Mark Prestegard, the manager of the facility, said the rooms are called “modules,” which are 150 feet by 30 feet and can house about two million books. Each side of the aisle is considered a “range.” The building has ten ranges stacked with shelves of different sizes for the sundry of potential sizes of books to come.

The HDC ecently received about 300,000 books from the Hayden and Noble libraries due to the in-progress renovations at Hayden. 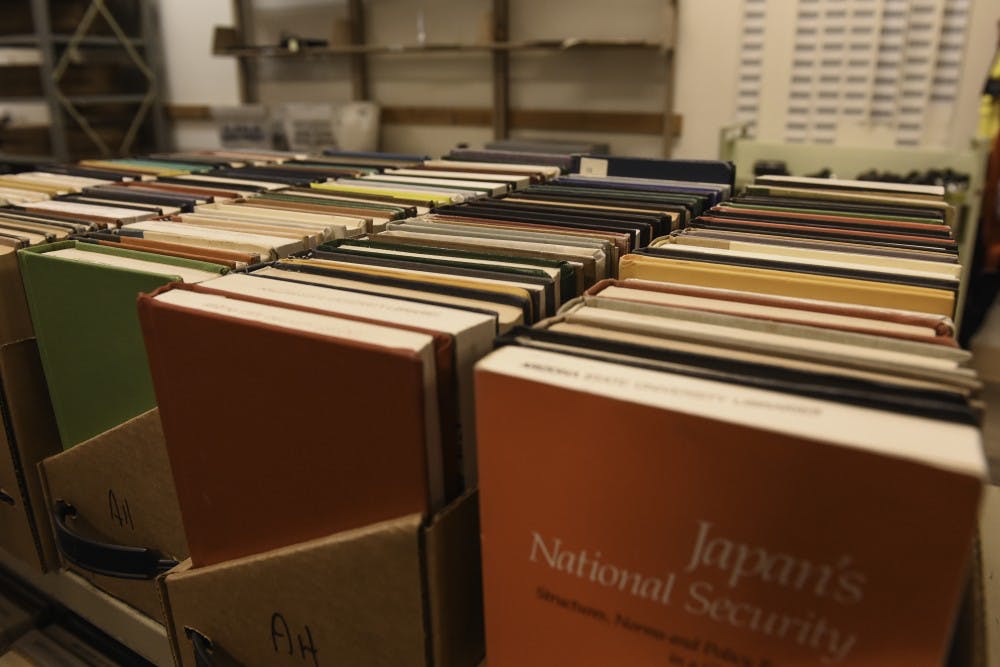 Nick Canaday
Books of similar sizes are placed in boxes to be stored on racks in university library archives building on the Polytechnic campus of Arizona State University in Mesa Arizona, Thursday, Oct.18,2018.

According to Prestegard, subject specialists at each of the ASU libraries identify books that need to go into the modules. Sometimes books that have been lost for a long period of time and are no longer in the library catalog are rediscovered and sent to the facility.

The University also preserves certain journals or periodicals as decided by the Western Regional Storage Trust. The idea behind this concept is that if a library discards a copy of a book a student needs, for whatever reason, there are multiple other copies of it available at the HDC facility.

ASU is also a partner institution of HathiTrust, which is a digital library. The name of the company is a play on the Hindi word for elephant, denoting its efforts to be a repository of research knowledge, as elephants remember everything.

Laster mentioned that yet another reason books are moved to the facility is to make space for the libraries undergoing renovations.

Once the books arrive, 20 student workers and about a dozen staff enter the books into databases and stick a marking unique to the HDC called an S-barcode.

Libraries previously used a call number to identify the location of a book. Now, you can identify the module, range, shelf and exact position of the book just by the numbers on the S-barcode.

It's as easy as that.

“We process about 35,000 books each month,” Prestegard said.

Module one is almost full, while modules two and three are just beginning to be filled. Prestegard said this is because the facility ran out of shelves of the appropriate size for some books in module one and had to start filling shelves in other modules.

This system of arrangement, called the Harvard model, was developed in the 1960s, Prestegard said.

The books are kept at precisely 50-degrees Fahrenheit and 30 percent humidity so that, ideally, they will last 200 years, compared to the 20-year average life of a book on a typical library shelf.

Not every university has an HDC facility.

“It’s one of the latest trends among libraries. Especially when you have a lot of books, let’s say when you have a million or more books, you want also to have the library available for use,” Prestegard said.

The books can be transferred to the facility, which then opens up space in the library that can be used for student study space, according to Prestegard. 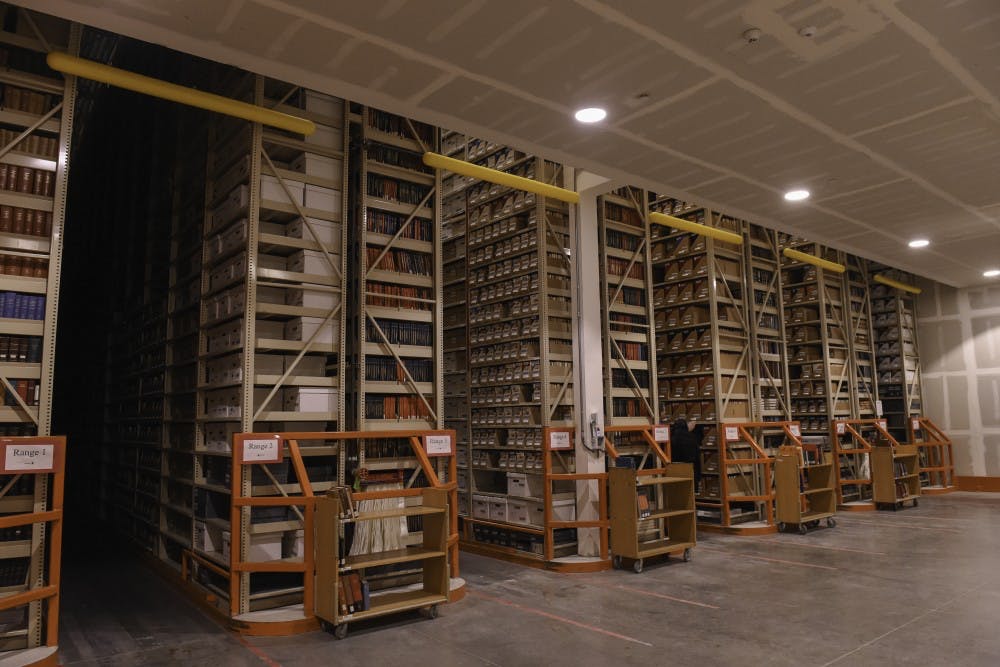 Nick Canaday
Books are stored on racks in the University Library Archives building on the Polytechnic campus of Arizona State University in Mesa Arizona, Thursday, Oct.18, 2018.

"ASU library is one big library, with branches on each campus," Laster said.

This means that students have access to materials across libraries on all four campuses to use for research.

“Back then, we had a lot of books,” he said about ASU’s libraries in the early 2000s, “and it was a problem. The third floor of Hayden library was full. It was so jam-packed with books, we had to put books sideways on top of books because we didn’t have room to put them on the shelves.”

The facility currently holds 1,626,000 books, and can hold up to six million, as of now. At the moment, Prestegard said that holds a total of about five to seven million books across all its libraries. It continues to collect new books all the time.

This means the facility may need to expand in the future, which they have room for.

Similar facilities, such as at the University of Chicago, have robotic technology, Prestegard said. The different kinds of robotic technologies can do things like bring you the book you need, pick up the entire shelf and use a carousel.

Although Prestegard said the University looked into this technology, and President Michael Crow mentioned it during his forum with students last month, there does not seem to be a plan for it in place right now.

“Retributing what we have to robotic tech would not be feasible at this time,” Prestegard said.

Brittany Lewis, the director of communications at Hayden Library, also said that she hasn’t heard anything about plans to bring in robotic technology to the libraries or the HDC facility. It is, after all, new, and there are a lot of prototypes out there. It’s also expensive to buy and maintain.

If the University were to bring robotic technology into the HDC, Prestegard said it would only change the retrieving and re-shelving of items. The processing of new books that come into the HDC facility is still only a manual process.

So do they expect ASU to stay around for another 200 years?

"Well," Prestegard says, laughing, "we don't know what's going to happen, do we?"