Showdown on the rez: more than just a game for ASU women's basketball

When Ryneldi Becenti took to the basketball court at an event center in Window Rock, Ariz. over Veterans Day Weekend, it was more than a return to the hardwood. It was a homecoming.

Becenti was one of several Native American guest coaches for the ASU women's basketball team during their game against Big-12 powerhouse Baylor University in a small town near Window Rock, the capital of the Navajo Nation. The Veterans Day game not only commemorated the service of Native American vets, it was also a winning display of "rez ball," a type of fast-paced, high-intensity basketball that has become a staple of the Navajo community.

"To my community, basketball is in our blood," Becenti said. "That two great collegiate teams like ASU and Baylor would decide to come to the reservation was unbelievable and amazing. Not a whole lot of kids get off the reservation to see a game like that."

The Showdown on the Rez. pic.twitter.com/MedKngyVaX

"We're going to go up there and tell the story of rez ball — to tell their story," ASU head coach Charli Turner Thorne said prior to the game.

The Sun Devils couldn't pull out the win, but the close game still highlighted the Native American roots that run deep in ASU women's basketball. Becenti took the floor as a guest coach for ASU alongside Kalene Carl (1997), Michelle Tom (1998-99) and Rainy Crisp (2000-03) .

Once her ASU career was complete, Becenti, who is a Window Rock native, was the first-ever women's basketball player to have her jersey hung up in the Wells Fargo Arena rafters and the first to be inducted into the ASU Hall of Fame. 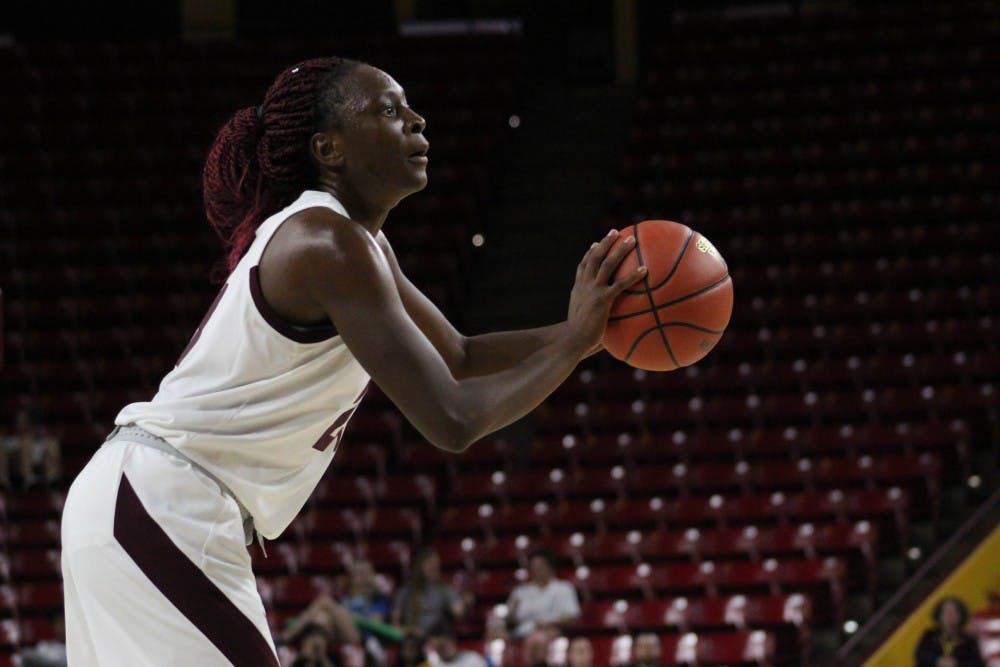 Becenti went on to play overseas and eventually returned to sign with the Phoenix Mercury for their inaugural season as the first Native American woman to play in the WNBA, solidifying her legendary status in her hometown and home state.

Kids were at the core of the decision to bring the game to the reservation, and Turner Thorne was focused on creating an event to show the power of the game first-hand. The reservation is almost five hours away from the ASU Tempe campus; most families don't get the opportunity to travel out to see any collegiate games.

"We're hoping just this little bit of exposure motivates little girls and little boys," Turner Thorne said. "We’re going to have student-athletes play in front of them that have Arizona State across their jersey, realizing that basketball could get you a college education and a degree. Just the opportunity to bring Arizona State to that community in itself is an amazing opportunity for so many kids to realize that a big-time university is just a few hours away.”

Senior forward Kianna Ibis shared the sentiment of how important this game was for the community.

"Basketball is anybody's sport," Ibis said. "Anybody can play it. I think it's very important to have inclusion of everyone. Basketball is a platform, and we can use this platform to recognize and represent the culture and the military."

The day of the game, fans lined up outside the BeeHoldzil Fighting Scouts Events Center hours before tip-off, nearly filling the 6,500-seat arena. They were treated to a back-and-forth game that saw then-ranked No. 24 ASU lose a lead late in the game and ultimately fall short against the No. 4 Baylor team.

Thank you to the Navajo Nation for hosting us and allowing us to take part in a very special pregame ceremony!#ShowdownOnTheRez pic.twitter.com/imONf2muug

After a slow start by both squads, ASU led 19-8 in the first quarter. The Lady Bears were unsuccessful in their attempt to narrow the gap by the end of the first half, with ASU up 35-24 once the halftime buzzer rang.

ASU held onto its lead throughout the third quarter, but Baylor rapidly closed in. After a tightly contested thriller of a final quarter, the Lady Bears finally took the lead late in the fourth, eventually winning the showdown 65-59.

“We lost, but the event won,” Turner Thorne said.

Not the result we wanted, but this team is just getting started. Great things to come. #ShowdownOnTheRez pic.twitter.com/bEywpqvS42

Regardless of the final score, the night was a success, filled with high-intensity transitional plays — just like rez ball.

The game was bigger than basketball. It was about recognizing the sport's unifying power while honoring the sporting history and culture of the Navajo.

This was about potentially reaching the next Becenti or Michelle Tom, forging a path for a new generation to create its own stories and dreams, regardless of where they come from.

"It was not only special to me but to the whole community, Native Americans and everyone who watched it on ESPN," Becenti said. "It had a huge impact in that it inspired the youth. It meant a lot to my community. It was great to know that by just talking to the basketball teams, they were really inspired and gained a lot out of it."

The "showdown on the rez," as the game was dubbed, exemplified what's achievable when people work to make a difference in the community, and it showed what it means to be a part of something bigger.

"Personally to me, it's like a nation came together," Becenti said. "All different types of people came together. It was something we'll never forget."